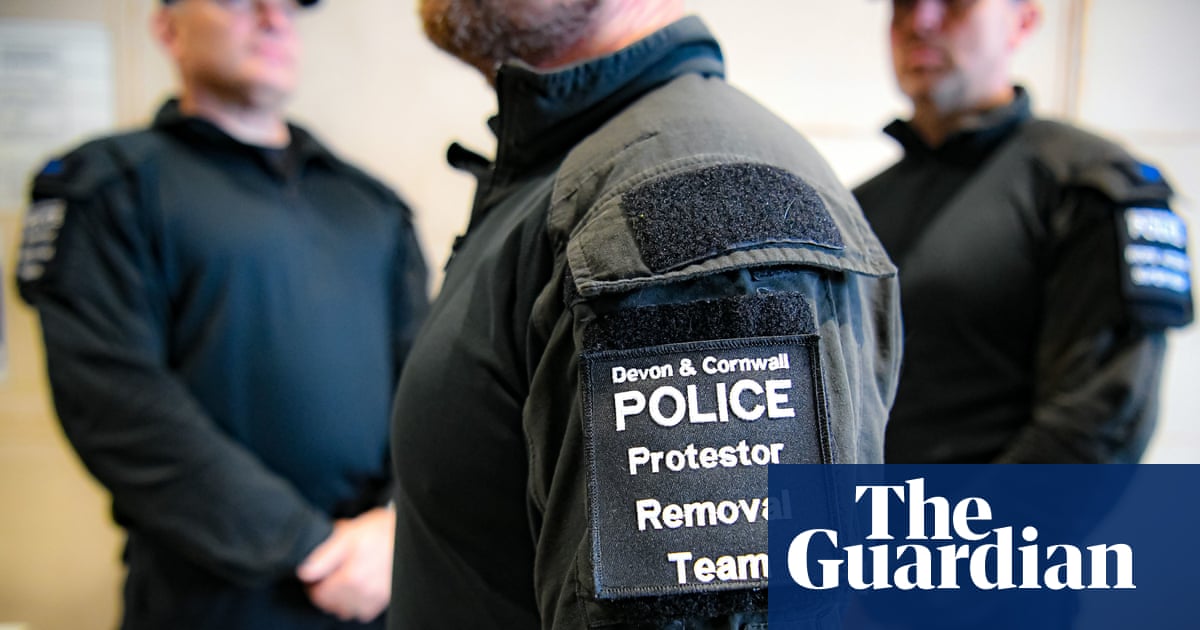 Activists are expected to disrupt next month’s G7 summit in Cornwall by blocking main roads into the county, trying to obstruct convoys carrying world leaders and perhaps even targeting a cruise ship that will be anchored off the coast as extra accommodation for police officers.

Devon and Cornwall police are preparing for thousands of protesters to head to the far south-west of Britain for the 11-13 June event, which is centred on the seaside village of Carbis Bay and the towns of St Ives and Falmouth.

The force said on Thursday it has identified more than 30 groups planning protests, marches, demonstrations or direct action – and accepted there were bound to be others it did not know o

Two official “protest sites” have been set up, one in Truro and one in Falmouth, and demonstrators will be encouraged to hold their events there but the police conceded that they will not be attractive for groups intent on causing disruption.

Police are not anticipating violent clashes between protesers and officers but believe a tactic that will be used by activists is to lock themselves on to buildings, vehicles or roads to cause delays and disruption.

The policing operation will come under intense scrutiny, particularly after the neighbouring force of Avon and Somerset came in for criticism over some of the tactics it used during the “Kill the Bill” protests in Bristol.

Johnson insisted that the Devon and Cornwall force was committed to allowing protesters to get their points across. “We want to facilitate the right to protest. We’re a democratic country. It’s in our fabric.

“But the police have to balance the right to protest with the right of the community to go about their daily business. At no point are we stopping people from protesting. We’re just saying that by locking yourself on to a road and blocking it for six hours, the balance is wrong. You can go to a protest site or protest pretty much everywhere in Devon and Cornwall but you can’t block the M5.”

In a hangar at Devon and Cornwall police’s headquarters, officers showed the sort of “lock-on” devices activists used, from simple bike locks to tubes made out of lengths of drainpipe, plastic and steel.

Johnson said roads into Cornwall and leaders’ convoys could be targeted. With only one main road, the A30, leading into the west of Cornwall, the area is vulnerable. The geography of Cornwall is challenging,” said Johnson. “Cornwall gets snarled up in the summer anyway. And with lockdown finishing, Cornwall is going to be busy with tourists.”

He said teams of officers would be on hand to cut activists free but only after they had engaged with them and asked them to leave voluntarily. He warned local people that it could take hours to free protesters.

N somtotaal van 6,500 officers will be on duty at G7, with all 43 police forces in England and Wales sending personnel. Amper 200 hotels and B&Bs have been hired as well as the cruiseferry MS Silja Europa, which will be anchored off Falmouth.

A police source said there were concerns that the vessel could be a target of activists and plans were in hand to defend it from attack.

Van 1 June work on installing security barriers and fencing around key venues in Carbis Bay and St Ives will begin. During the summit the main road into the two communities will be closed.

Extinction Rebellion in Cornwall has promised a series of “Covid-safe non-violent mass participation actions across mid-Cornwall from Carbis Bay and St Ives to Truro, Falmouth and beyond.” In a statement it said: “We will be on the beaches, headlands and town streets bringing our message to the G7.”

The group has launched a crowdfund appeal for £5,200 to help it mount what it calls “high profile, non-violent, theatrical actions” during the event.

A coalition of groups under the banner Resist G7 is planning three days of action and is also raising funds to pay for camping spaces, minibuses and toilets. It is encouraging all protest groups to boycott the official sites.