World Cup 2022: ranking the top 10 contenders a year before Qatar 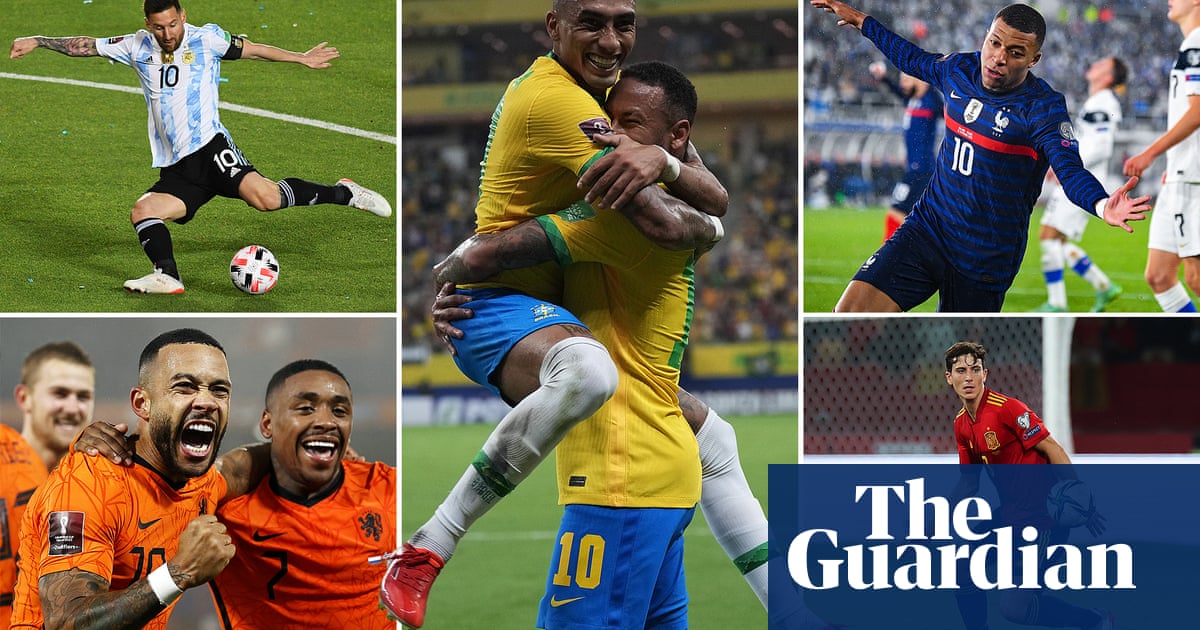 With just over a year to go until the World Cup kicks off, 12 teams have qualified alongside hosts Qatar. All four semi-finalists from 2018 have sealed their spots and are joined by former world champions Argentina, Brazil, Germany and Spain, while recent European champions Portugal and Italy still have more to do. With most of the big hitters now able to prepare for the tournament, we assess where they stand as the countdown to Qatar begins.

The Netherlands boast some exciting young talent, but the gap in quality between their star players and the supporting cast could hold them back. The spine of the side is extremely strong. With Virgil van Dijk, Matthijs de Ligt, Stefan de Vrij, Daley Blind and Denzel Dumfries available in defence, they should be extremely solid but, for one reason or another, they are still susceptible to collapse from time to time. They have conceded at least two goals in games against Turkey, Scotland, Ukraine, Czech Republic and Montenegro this year. At the opposite end of the pitch, they rely on Memphis Depay for inspiration. Van Dijk, Frenkie de Jong and Georginio Wijnaldum are all key players for Louis van Gaal’s side but the Barcelona forward is their real talisman. When he’s not on it, they tend to underwhelm.

Denmark raced into the World Cup, qualifying after seven straight wins in which they did not concede a single goal. Their group might look favourable, but it would not have been considered a walk in the park in years gone by. Kasper Hjulmand’s team has progressed quickly in recent times and Denmark are now aiming to go one step further than the semi-final they reached at Euro 2020. The unfortunate loss of Christian Eriksen has galvanised a team that needed an injection of unpredictability, and the likes of Mikkel Damsgaard and Andreas Skov Olsen have stepped up. The age profile of the squad is now much more encouraging and things have clicked into gear at both ends of the pitch.

It might seem churlish to place the European champions in eighth – and below the teams they beat in their semi-final and the final of Euro 2020 – but they do not possess a squad that is likely to dominate international football. Worthy winners in the summer, the Azzurri played spellbinding football at times but they also rode their luck a little in the knockout phase. Roberto Mancini succeeded in making his team appear like a well drilled club side through outstanding coaching but he does not have the talent or the emerging young players of many of his competitors. Again, writing off a defensive partnership that defied the doubters in the summer may seem naive, but Giorgio Chiellini will be 38 next year and cracks have already started to show in the side since their triumph at Wembley. Having won the World Cup in 1982, Italy failed to qualify for the subsequent Euros in 1984 and the reverse is a distinct possibility now, as the Azzurri risk failing to qualify for consecutive World Cups.

There is a growing sense that Belgium’s golden generation has lost much of its sheen. A long senior career appears to have caught up with Eden Hazard earlier than most – and certainly Real Madrid – expected, while increasing injury problems suggest that the brilliant Kevin De Bruyne may also have peaked. Romelu Lukaku remains rampant in front of goal but his understudies are uninspiring and a lack of emerging talent at the opposite end of the pitch is the real concern. Jason Denayer is their only centre-back under the age of 32 with any meaningful international experience. Belgium’s chance may have come and gone.

On the subject of last chances, Lionel Messi will be aiming to follow up winning the Copa América with a first ever World Cup in what may be his swan song. The entire Argentina squad seems motivated above all else to ensure the man many people consider the greatest of all time can claim to be that once and for all. He has a solid if unspectacular support cast, with the rapid emergence of Emi Martínez giving Argentina something they have not really possessed for many years – an elite goalkeeper. In 14 caps, the Aston Villa stopper has now kept nine clean sheets. The defensive resolve of the team is much improved, which is just as well because Messi is past his peerless prime and cannot be relied upon to win games singlehandedly.

Spain have played some of the most attractive football this year but their lack of a cutting edge has cost them when it has mattered most. They controlled their Euro 2020 semi-final against Italy and the Nations League final against France but could not convert their dominance of the ball. They lack the experience of previous Spain sides. The average age of the team has dropped dramatically with the introduction of Unai Simón, Eric García, Dani Olmo, Pau and Ferran Torres, but the teenage sensations Pedri, Gavi and Ansu Fati offer the most hope for the future. They are extremely exciting but 2022 may come too soon.

From beaten World Cup semi-finalists to beaten European Championship finalists, England will now be fighting against a nearly-men reputation, but their progress is clear to see. The development of the partnership between Declan Rice and Kalvin Phillips was pivotal in the summer, turning what was something of a problem area into a position of strength. Rice and Phillips protect the defence well (and they need it), but Gareth Southgate’s top priority is now maximising his attacking talent. He was accused of being too safe in the summer and will need to at least loosen the shackles if England are to fulfil their unquestionable potential.

Eliminated by England at the last-16 stage of Euro 2020 in July, Germany are already a different proposition altogether. The sense that Joachim Löw had taken the side as far as he could was apparent years ago and the return of his former assistant Hansi Flick brings hope aplenty. His record so far is exemplary; he has won all seven of his games so far with a goal difference of +29. While the opponents have been modest at best, this is a side that was pumped 6-0 by Spain this time last year before losing to North Macedonia in March. Flick’s front-foot football is a joy to watch and attack is definitely the best form of defence for his squad, which lacks a little strength in depth at the back.

France were knocked out of Euro 2020 by Switzerland at the last-16 stage, but have remained loyal to Didier Deschamps after his triumph at the World Cup in 2018 – perhaps making the same mistake Germany did with Löw. The team fails to add up to the sum of its enviable parts too often, but cannot be written off given the enormity of its talent. Karim Benzema’s return to the fold – much like Thomas Müller with Germany – was probably too late but his partnership with Antoine Griezmann and Kylian Mbappé should be even more fearful next year. They need the increasingly injury-prone N’Golo Kanté to be fit to balance out Paul Pogba’s panache. They have all the tools to retain their title.

Unbeaten in qualifying, with 11 wins in 13 games, Brazil have a tremendous blend of youth and experience. With Fabinho and Casemiro anchoring the side, their frightening forwards can flourish. Neymar is still the star but Vinicius Junior, Antony and Raphinha are all enjoying excellent seasons. With two of the world’s best goalkeepers – Alisson and Ederson – protected by a defensive pairing of Marquinhos and Thiago Silva, the only area that lacks star quality is the full-back positions, which is something of a rarity for Brazil. With 50 wins and just five defeats under Tite, Brazil are favourites for good reason.