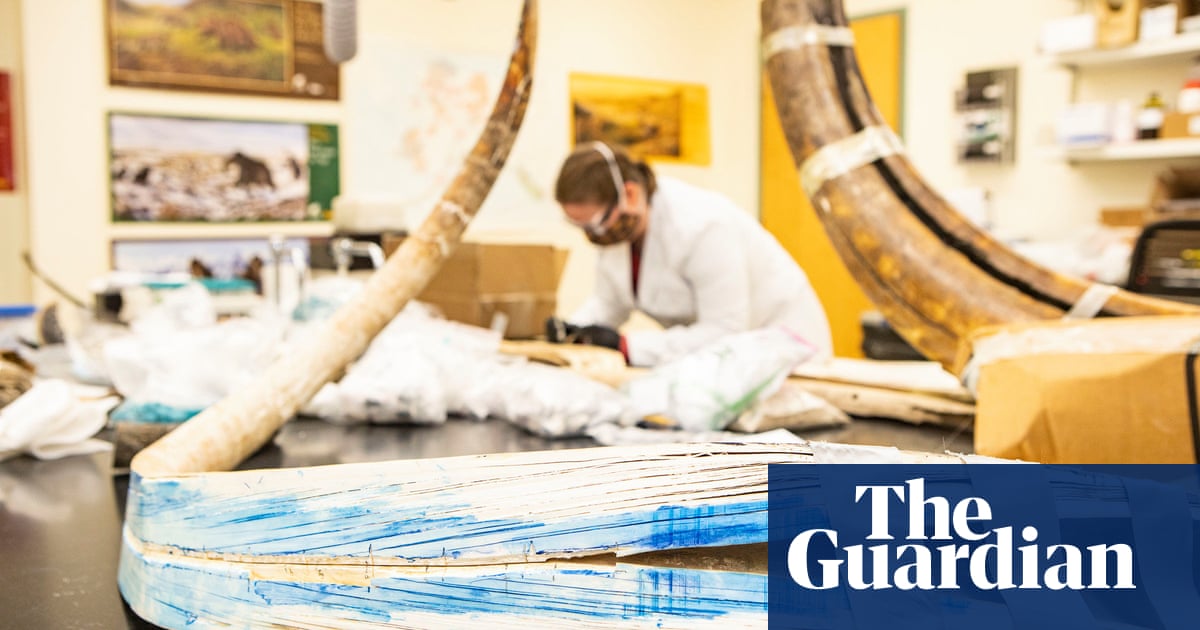 He was huge, hairy and boasted two enormous tusks: researchers say they have discovered a woolly mammoth called Kik who traipsed almost far enough in his life to circle the Earth twice.

Experts say the work not only sheds light on the movements of the giant proboscideans, but adds weight to ideas that climate change or human activity may have contributed to the demise of most of the creatures about 12,000 hace años que.

Dr Clément Bataille, a researcher from the University of Ottawa and co-lead author of the research, said it highlighted the importance of how climate change may affect species, noting that studies had shown the movements of elephants had altered.

“We don’t want our kids to see elephants the way we see mammoths,"Le dijo a The Guardian.

Writing in the journal Science, Bataille and colleagues from a host of research institutions report how they studied the remains of a 28-year-old woolly mammoth that died about 17,100 years ago north of the Brooks Range in Alaska – but not before travelling about 70,000km (43,500 millas). In a nod to the nearby Kikiakrorak River, the mammoth has been named Kik.

The team analysed ancient DNA from Kik’s remains, revealing the animal was a male, and then turned their attention to one of his 1.7-metre-long tusks.

These appendages grew over a mammoth’s life. Layers were added daily, and contain chemical signatures about where the mammoth lived at the time they formed. In particular, the team looked at the ratio of different forms, or isotopes, of strontium, reflecting those in the mammoth’s food.

Bataille noted there was a pronounced variation in strontium isotope ratios in plants and soils across Alaska because the underlying rock types, from which they get their strontium, varied dramatically, ranging from ancient remains of the Earth’s crust to relatively recent volcanic deposits.

The team compared the strontium isotope ratios from the tusk layers with maps for the region they previously produced using artificial intelligence and data from rodent teeth recovered from all over Alaska.

This allowed the researchers to model the likely routes that Kik had taken over his lifetime, with the results further refined by looking at oxygen isotope ratios in the tusk; these can shed light on factors such as temperature at the time a layer was formed.

The results reveal Kik probably covered about 70,000km in his life, roaming the lower Yukon River basin as a young mammoth before his range expanded from age two to about 16, when the team say he probably moved as part of a herd.

After that age there was a distinctive shift in his range. “Our hypothesis is that he got kicked out of the matriarchal herd at that point, which is what happens to male elephants at about that age as well,” said Bataille.

Kik’s long-distance hikes between interior Alaska and the north slope of the Brooks Range of mountains during this time, the team add, were probably down to seasonal changes in resources. The final 18 months of his life saw the mammoth living in a small area to the north of the Brooks Range.

The team say their study suggests both climate change and human activity may have played a role in the fate of the mammoths: a warming climate may have led to shrinkage or fragmentation of the habitats the mammoths roamed and relied on and an expansion of less favourable ones such as forested areas and peatlands. Ese, Sucesivamente, may have left the creatures more vulnerable to human hunters. The team’s data suggests Kik spent time in the mountains, passing by some of the earliest human sites in Alaska, where other mammoth remains have been found.

Love Dalén, a professor of evolutionary genetics at the Centre for Palaeogenetics in Stockholm, who was not involved in the work, said it was the first time the movements of a long-dead animal had been tracked in such exceptional detail.

“We really learn something new about how mammoths lived from this study," él dijo. “It’s not too surprising that male mammoths roamed around so much. But it’s interesting that it seems to have crossed the Brooks Range several times, that is a pretty big hike.”