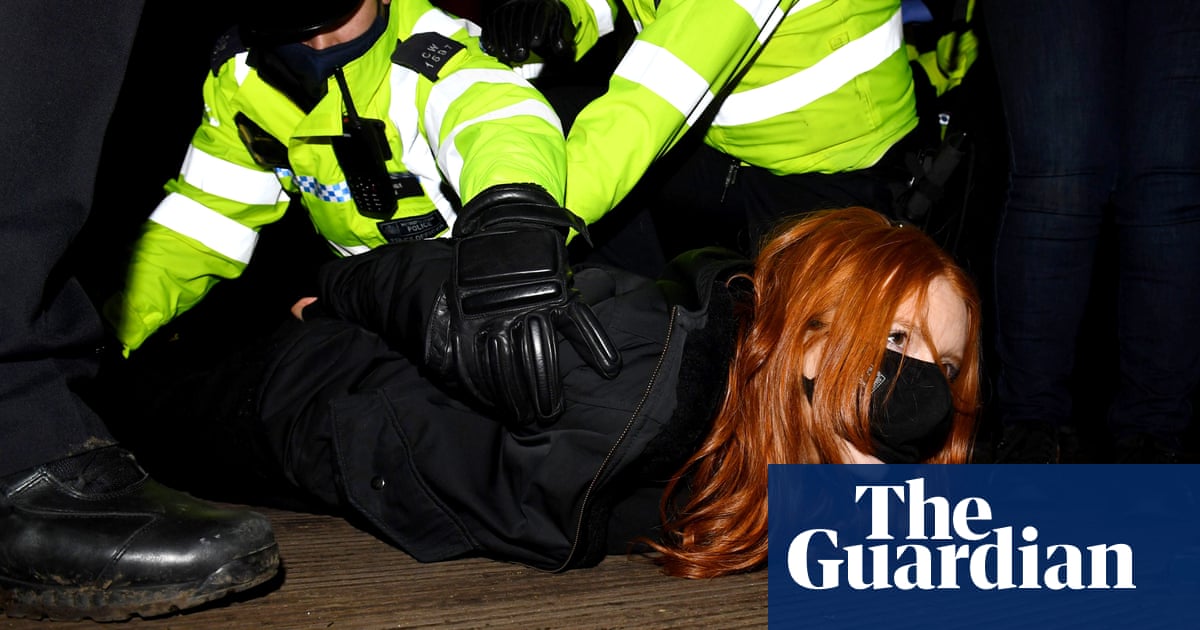 One striking image has come to symbolise the horrifying turn of events at the vigil on London’s Clapham Common on Saturday in memory of Sarah Everard: a young woman pinned to the floor by two male police officers, hands held behind her back, eyes wide in defiance.

Patsy Stevenson, whose photo was shared thousands of times on social media and on newspaper front pages, spoke on Sunday to condemn the policing of the vigil the previous day as “disgraceful”.

Stevenson, 28, a physics student from Southend in Essex, said she would like to “have a conversation” with the Metropolitaanse polisie commissioner, Cressida Dick, byvoeging: “I think dialogue is very important in this case.”

On Sunday she remained unsure why she had been detained when she was “just standing there” and was contemplating whether to challenge the £200 fine she had received. Ongeag, she vowed to take to the streets again to fight for women’s voices to be heard, urging others to do the same.

Stevenson joined thousands who had gathered throughout the day on Clapham Common, near where Everard was last seen, to pay their respects. When Sophie Levin, 26, arrived at the vigil at around 5.30pm, she described an emotional but calm crowd, made up of women, many carrying candles, who wanted a “space to stand in our masks and cry”.

“It was kind of magic,” said Gracie-Mae Bradley, describing the bandstand with speakers surrounded by flowers and tributes standing starkly against the dusky sky. The interim director of Liberty said that initially there was not a heavy police presence, with officers spaced out along the perimeter of the bandstand in groups of twos and threes.

Egter, as night fell around, around 6.20pm, those attending described the police making their way to the bandstand, trampling flowers in the process, in an attempt to stop the speakers who were leading call and response chants. When they resisted, some in the crowd started “booing”, shouting “let her speak” and “shame on you”. Becky Gardiner, a lecturer at Goldsmiths, Universiteit van Londen, gesê: “The police were effectively whipping the crowd up.”

In the next half hour, officers formed a chain and moved in on the crowd, forcing people closer to one another. They flooded the bandstand, threatening those who did not leave with arrest. Stevenson was one of those who was arrested.

“I wasn’t doing anything,” she told the Counterfire webwerf. She said officers threw her to the floor. “I’m 5ft 2in and I weigh nothing. Several police were on my back trying to arrest me.”

Stevenson said she was arrested, put in handcuffs and then dragged away, surrounded by about 10 beamptes. In a police van, they took her name and address and gave her a £200 fine, she told LBC.

Gardiner says that shortly after, a police officer approached her and her friend, “another 57-year-old woman”, and was “aggressively shouting” very close to their faces that they would be arrested if they did not immediately leave. “They were doing that all over. They were basically trying to get everyone to go by being really intimidating and hostile," sy het gese.

Bradley was also threatened with a fine, and she said a police officer told her that “we’re tired of engaging people, we’re going to start handing out tickets, so you need to leave right now”.

Among several videos circulated on social media of heavy-handed policing, footage obtained by the PA news agency shows two male police officers shoving an older woman who had fallen on her knees forcefully back into the crowd.

The minister for safeguarding, Victoria Atkins, said the photograph of Stevenson was something “the police will have to explain” in a report ordered by the home secretary.

Stevenson said: “We were there to remember Sarah. We all felt deeply saddened and still do that it happened so I brought a candle with me but unfortunately wasn’t even able to light it to put it down because the police turned up and barged their way through.”

She said she went to Clapham Common to “support any women, whether it be cis women or trans women” who “cannot walk down the street by themselves because of the fear of men”. Sy het bygevoeg: “There does need to be a change where women have freedom to live their lives in peace, without fear.”

Women were angry, and should be, Stevenson said. She labelled the policing tactics “disgusting”, especially given that a serving Met police officer has been charged with the kidnap and murder of Everard, 33, but said the protests showed women that “they can fight”.

Although Stevenson said she would not be attending a protest organised by the feminist group Sisters Uncut on Sunday afternoon, she supported another protest on Monday at 5pm in Parliament Square in central London. “We need to be seen and heard," sy het gese. “See you there.”

Jocelyn Hughes, who works at Clapham Flowers, said hundreds of people had been streaming in all weekend to buy flowers to lay in Everard’s memory. Hughes said the female-run business was happy to be part of commemorating the memory of a woman they regarded as “one of their own”.

In a statement on Sunday morning, the Met’s assistant commissioner, Helen Ball, gesê: “We absolutely did not want to be in a position where enforcement action was necessary. But we were placed in this position because of the overriding need to protect people’s safety.”