After initial hesitation about the seriousness of Turkey’s objections, its president, Recep Tayyip Erdoğan, has doubled down on his threat to veto Finland’s and Sweden’s applications for membership of Nato, saying there is no point in either country sending delegations to Ankara to persuade him otherwise.

On Wednesday, he also extended his demands from the two he outlined on Monday to 10, leading to claims that he is using blackmail.

At his press conference on Monday, he made two key demands: that Finland and Sweden end their supposed support for the Kurdish Workers’ party (PKK), which Turkey regards as a terrorist organisation, and that they lift their ban on arms exports imposed in October 2019 after the Turkish incursion in northern Syria.

No one doubts that Erdoğan’s intervention could tangle Nato up in knots for months. It is now the task of alliance diplomats to establish Erdoğan’s seriousness and the price that would have to be paid to make him back down, and prevent a full-blown Nato crisis.

The Swedish foreign minister, Ann Linde, initially hoped that something had got lost in translation after she had been quoted in the Turkish press saying the Turks regard all Kurds as terrorists. Linde said on Sunday she had never made these remarks, had never met the PKK, and would not do so.

She was cautiously optimistic that any misunderstanding could be cleared up, but by Wednesday it was clear her reassurances were falling short of what Erdoğan requires.

The Nordic political class initially appeared sceptical about Erdoğan’s seriousness. Finland’s president, Sauli Niinistö, said he spoke with Erdoğan a month ago and none of his current concerns were aired. It was also being said that no early warning flares were sent up by Turkey’s Nato ambassador, Basat Öztürk.

But that assessment is changing. Jonathan Eyal, the associate director of the Rusi thinktank, said Erdoğan “lives on the edge and operates through brinkmanship”.

Eyal added: “Many of his demands about the PKK are part of a familiar Turkish tune. But he has domestic reasons to be standing up to America. The economy is in tatters and his popularity is at an all time low.”

With inflation at 66.9% and facing elections next summer, there is no harm galvanising the nationalist vote, but that is not to say Erdoğan’s complaints are entirely synthetic.

On Monday, the Turkish justice ministry identified six alleged PKK members it is seeking to extradite from Finland and 11 from Sweden. Add in people accused by Turkey of supporting the US-based cleric Fethullah Gülen, who Ankara accuses of orchestrating the 2016 coup attempt, and Turkey wants 12 people returned from Finland and 21 from Sweden.

Nordic diplomats say this list was last presented in 2017 and has not been the subject of any Turkish lobbying in recent years.

Turkish media has reported what it describes as other examples of a “soft” Swedish attitude to terrorism, including evidence that the Syrian branch of the PKK has held meetings in Stockholm hosted by the Swedish foreign office and the Olof Palme International Center, a thinktank funded by Swedish trade unions.

Turkey also says that in 2019 PKK supporters held a protest in a shopping centre in support of the jailed leader Abdullah Öcalan and Swedish security forces did nothing to prevent them from carrying the PKK’s “flag” and pictures of Öcalan.

Eyal said it would be hard for the Nordic countries to bow to these complaints.

“It is not possible for either country … to change its domestic legislation on freedom of assembly,” he said. “Sweden in particular has an active Kurdish community that has political support. This episode is reminiscent of 2009 when Erdoğan said he would not allow Anders Rasmussen to be appointed Nato’s secretary general unless Denmark closed a Kurdish TV station. Rasmussen was appointed but a year later the TV station was closed.”

Some similar delayed behind-the-scenes deal could happen this time. Neither country can simply tear up its own internal asylum systems and Sweden says it does do not run independent terrorist lists different from those compiled at EU level.

Eyal argues Erdoğan’s target is as likely to be the US as Finland and Sweden. Turkey’s 2017 purchase of Russia’s S-400 missile defence system turned it into a pariah in the US and led to Ankara being kicked out of the F-35 stealth fighter jet programme.

The recent rumours, denied by Moscow, that Vladimir Putin might visit Ankara in the near future were probably another signal from Ankara that it has cards to play. But it is precisely this double game that leaves so many other Nato states frustrated with Erdoğan’s brinkmanship.

The US supreme court poses a real threat to US democracy

America is not just a country. It’s an idea. But whose idea is it anyway? Peering through the mists of time, the current right-wingnut majority of the US supreme court believe they can divine the original ideas of som... 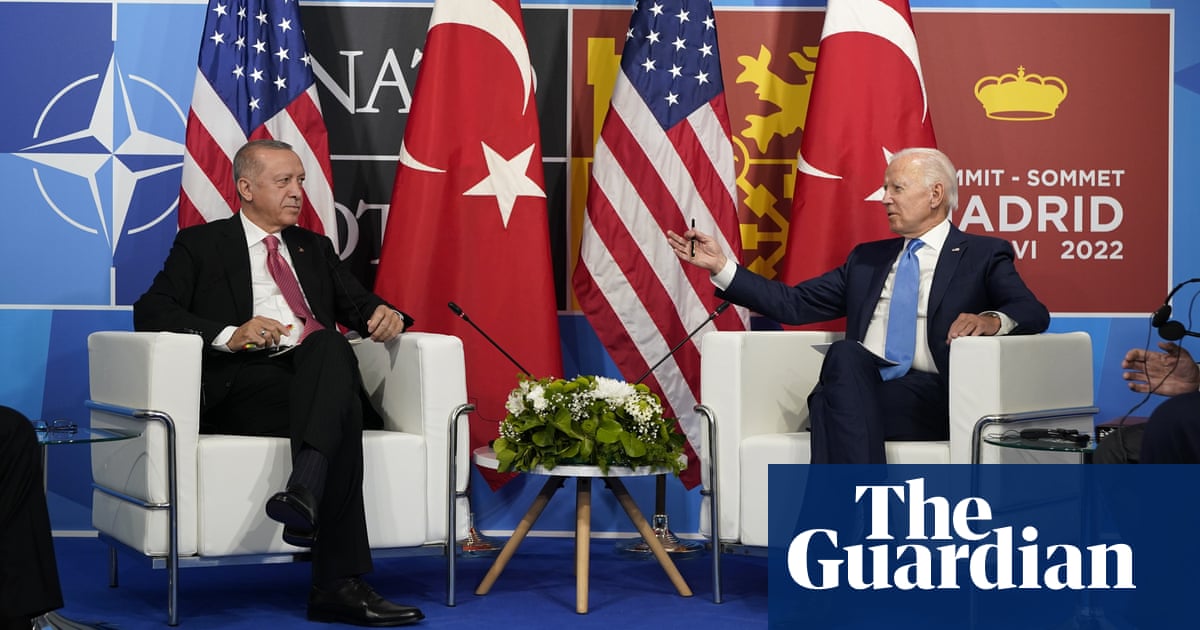