What if the most important election of the year is happening right now in Alabama? 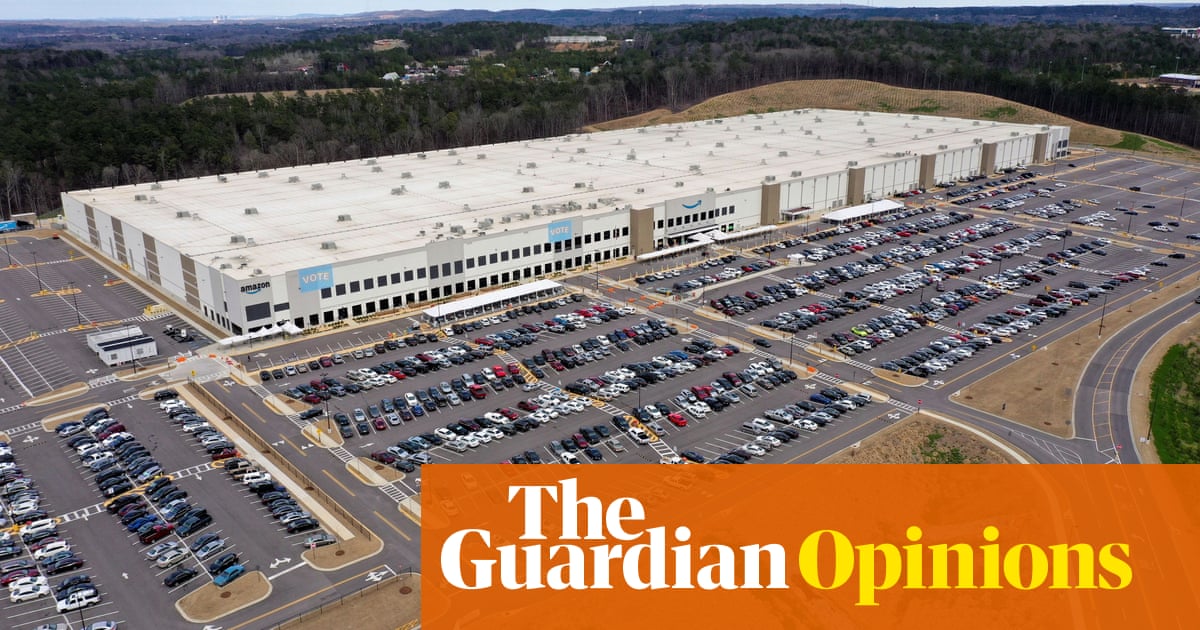 This month, 5,800 Amazon warehouse employees in Bessemer, Alabama, will be voting on whether or not to unionize with the Retail, Wholesale and Department Store Union in what could turn out to be the most important election of the year.

While the Bessemer fulfillment center itself is a drop in the bucket when compared to Amazon’s roughly 500 facilities around the country, this could be the ballot heard around the world. If successful, this election would mark the first unionized Amazon facility in the US.

Over the past 26 years, Jeff Bezos has built himself a private empire. Amazon is now the second largest employer in the US, after Walmart, and the fifth largest in the world. The more than 800,000 Amazon employees across the country represent a population between the size of Maine and Montana. Globally, the company employs more than 1 million workers.

Amazon is also the largest online retailer in the world, with a market cap (or value of the company’s shares) at $1.5tn – larger than the GDPs of most countries. The power this company yields is unrivaled.

Yet Amazon’s success has been made possible by the labor of the underpaid and overworked employees who keep operations running; by weakened anti-trust laws; by a larger US economic shift from manufacturing to the service and logistics sectors; and, of course, by generous government subsidies, which have seen the company get away with paying no taxes in recent years.

Unions alone will not bring Amazon to heel – but without them, all bets are off.

The message this election will send to workers is: if we can do it in the anti-labor, “right-to-work” south against one of the most powerful companies in the world – one with no scruples with regards to its anti-union tactics – then workers can unionize anywhere.

It would be a marked shift since Ronald Reagan’s mass firing of striking air traffic control workers, which caused a chilling effect on organized labor and ushered in a new pro-business, anti-worker era. Labor organizers are hoping that a victory in Bessemer might turn this tide.

The labor movement recognizes the significance of this election. Members of the AFL-CIO and nurses from a recently unionized hospital in North Carolina have been phone banking to speak with Bessemer workers directly about the importance of voting yes on a union. Supporters have also made it clear that the fight at the Bessemer facility, where about 85% of workers are Black, is also a fight for racial justice.

Biden’s recent statement in support of workers organizing in Alabama suggests that under this administration significant gains for labor can be won, but only if workers are willing to fight for them.

One of the biggest lies sold to the American public has been to convince the vast majority of people that “politics” means showing up to the polls every few years to elect representative officials who will take it from there. Like many aspects of our lives, politics has become something to consume passively. It’s cable news networks, the punditry class, bumper stickers, lawn signs, campaign donations. It’s horse-race journalism and partisan tabloids.

It has narrowed the spectrum of the “political” to red and blue, kids in cages or “migrant overflow facilities”, dog whistles over bull horns, an open disdain for working people or a veneer of compassion. Far fewer see the actions they take day-to-day, in the workplaces where we spend the majority of our waking lives, as something worthy of being political.

The Bessemer election has the potential to topple this frame in favor of a new horizon. The difference between electoral politics and labor organizing is the difference between voting in a president who says he will phase in the minimum wage to $15 an hour over the next four years – yet surrenders before the battle begins – and taking direct action to ensure that higher wages are guaranteed in your contract immediately.

Amazon prides itself on paying its workers $15 an hour – more than double the federal minimum wage – plus benefits. But rather than being a product of the benevolence of an enlightened CEO, we should all understand this to be a Machiavellian tactic used to preempt the serfs from storming the castle.

More importantly, workers organizing towards a union must recognize that in the long run, without labor protections, every employee lives under the dictates of an unforgiving and despotic market. These “tides” will only turn when workers see themselves as a unified force and recognize that a union victory for one workplace is a victory for all workers. It favors a rising tide that will lift all boats to the trickle-down economics that have left us in perpetual drought.

The Bessemer election is not one in which fulfillment center employees will cast their ballots and abdicate all further responsibilities. Rather, this vote would open the floodgates.

When the Russian tanks roll westward, what defence for you and me? Colonel Sloman’s Essex Rifles? Or the 66-year-old chairman of the WTA? Well, there’s an unusual thing. It turns out there is at least one body in spor...