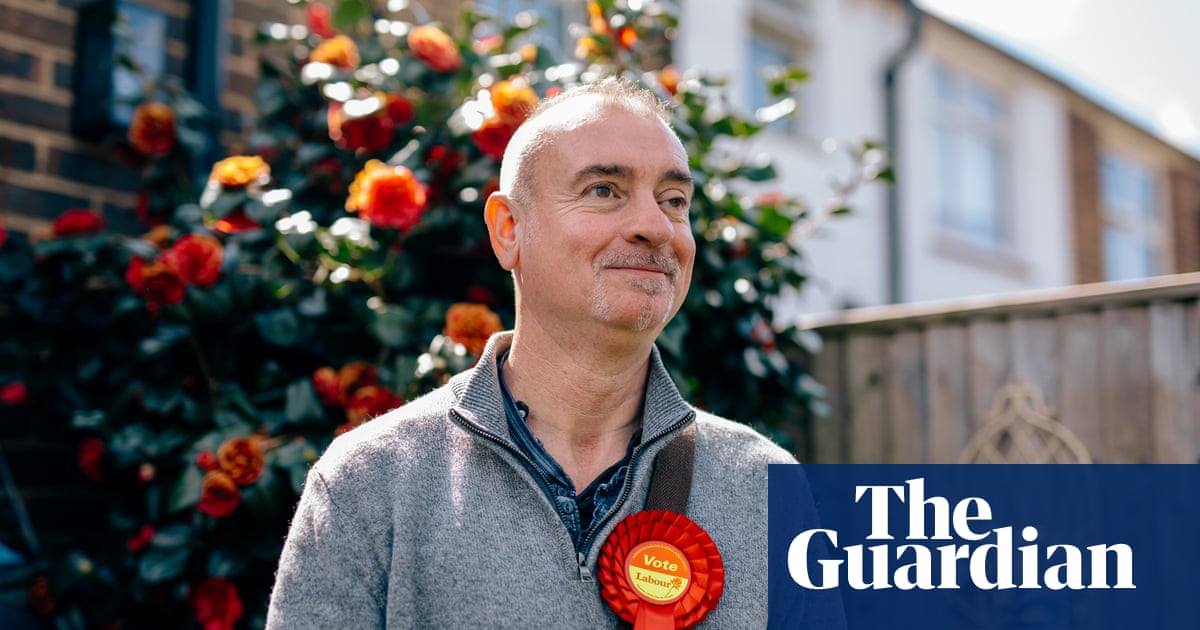 “Normally, I can go either way, but I don’t like what’s going on in the Conservative party,” says Dawn Gibbs, standing on her doorstep in the seaside town of Worthing. “At the last general [election] I did vote Conservative, but I’m not going to vote for them this time.”

Asked if she means Partygate, she nods. A delighted Andy Whight, the Labour candidate for the ward in this Thursday’s local elections, tells her: “That’s what we’re picking up every day, all over this area.”

Labour has gradually built up support in this Sussex town since 2017, when Beccy Cooper won the party’s first seat in a byelection – in Marine ward, where Whight is standing in the hope of joining her.

On another doorstep just down the street, Jody Aked tells him: “We’re voting for you. I’m more of a Green party person probably, but obviously I’m really keen to get the Tories out.”

She cites concerns over the cost of living crisis, saying her family will be partly protected because they have solar panels and an electric car, but she realises many others will not be so lucky.

Edward Hardy wants to talk to Whight about a row of chestnut trees at the end of his road that were cut down by a developer. He says he’s voted Conservative “more often than not. But not this time.”

“I wouldn’t have believed it, the number of long-term Tory voters who are saying they won’t vote for the Tories again,” said Rita Garner, who is standing in Worthing’s Tarring ward, hoping to replace longtime Liberal Democrat councillor Robert Smytherman.

Margaret Howard, standing for re-election in the Broadwater ward in the east of the town, agrees. “This morning I had a Tory say he had voted Conservative for 40 years, but it’s time for a change. We have had lots of switchers,” she says.

“Some are because of the local picture, because they know about the community work that’s being done locally, and some it’s because they don’t like what’s happening nationally – but we don’t mind either way.”

Cooper, who leads the Labour group on the council, explains that they have put together a local manifesto, based on conversations with voters over those five years. It includes everything from bringing the lido back into use to consulting on providing more dog-poo bins.

“It’s about people wanting green spaces for them and their families, and a town to be proud of. It’s not really rocket science, but it’s things that everybody can get onboard with,” says Cooper.

The Tories have been running a minority administration in Worthing since Labour deprived them of their majority in a byelection last December – triggered by the resignation of a Conservative councillor, Tim Wills, who was accused by the anti-fascist campaign group Hope Not Hate of privately supporting the far-right group Patriotic Alternative.

With 14 seats up for grabs on Thursday, Labour has high hopes of taking control.

Not only would that put Labour in power in a longtime Conservative stronghold, but it could point the way to potential gains in what Cooper calls the “blue sea wall” at the next general election.

Edward Crouch, the council’s Conservative deputy leader, is standing for re-election in Marine ward, where Whight hopes to dislodge him.

He reckons that Conservative voters are more likely to stay at home as a result of the Partygate row than to switch sides to Labour.

“I don’t think it’s losing us supporters, I think it may have an effect on turnout. That’s the figures that we’ll be looking at,” he says. “Our voters don’t vote against us very often, they just stay at home and shout at the telly.”

Locally, he says the Conservatives have been “a really solid, safe pair of hands when it comes to delivering”, but he adds: “At the same time, I don’t think any of us Conservatives locally are naive enough not to recognise that change is really sexy, and the promises of change are sexy.”

Recent years have brought younger, professional voters flocking into this once true-blue Tory seaside town – along the coast from Brighton and down the train line from London.

Down on the breezy seafront, as the smell of seaweed wafts up from the beach, the seafood joint Crabshack, with its stripped wood walls, is doing a brisk trade. Coast cafe, where the Labour MP Rachel Reeves came to launch the local party’s campaign, promises coffee and cake in the daytime and DJs at night.

Yet away from these gentrified spots are pockets of deep poverty. Labour’s Howard helped set up a busy food bank when the Covid pandemic hit and has organised school uniform donations. “It’s really desperate, there’s a huge amount of demand,” she says.

The former Conservative minister Tim Loughton held his East Worthing and Shoreham seat in 2019 with a modest majority of 7,474, which Labour activists believe could put it within reach next time around, though Peter Bottomley, the father of the House of Commons, holds West Worthing with an apparently impregnable 14,823.

If proposed parliamentary boundary changes go through, they would create a single Worthing seat, which Labour believes it would have a good chance of taking. “Here, to have a boundary change would really consolidate all the work we’ve done in Worthing,” says Cooper.

Activists from other nearby constituencies have been pouring in to help here, alongside a steady stream of Labour frontbenchers.

Today, it’s the shadow work and pensions secretary, Jonathan Ashworth. “Worthing’s been Conservative for longer than I’ve been alive, and I do think there’s that sense that it’s time for a change,” he says, after a round of canvassing in the spring sunshine.

“You’ve got the rule-breaking, the scandals, the police fines and all that – and you’ve got this cost of living crisis where there is no substantive help from the government.”

If Worthing does go red on Thursday, Crouch, the Conservative candidate, says it should be a wake-up call to his party not to focus all its efforts on holding Boris Johnson’s gains in the “red wall”.

“There is a feeling that in defending the red wall and all these people who’ve never voted Conservative in other parts of the country, there’s a danger that Conservative heartlands will be forgotten,” he says. “I think that’s a message that if the council changes colour, I hope does land: because you can’t put all your eggs in one basket.”