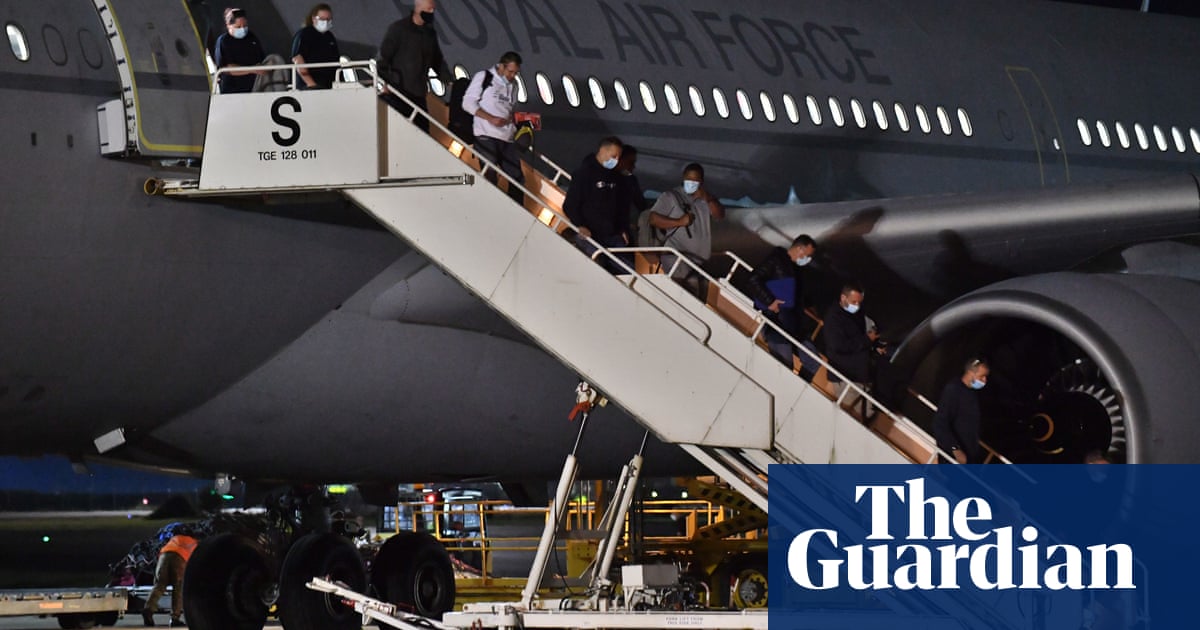 Hello, I’m Virginia Harrison and these are the top stories this morning.

Taliban promises of “safe passage” to the Kabul airport for Afghans trying to flee the country have been undermined by reports of women and children being beaten and whipped as they try to pass through checkpoints set up by the militants. Sources in Kabul told the Guardian the Taliban were checking documents and forcibly turning some people around at checkpoints, refusing to let them reach the airport.

Still, evacuations are continuing from the capital, and flights carrying UK nationals and Afghans landed at RAF in Brize Norton, Oxfordshire, on Tuesday night. It comes as Boris Johnson unveils a plan to resettle 20,000 Afghan refugees over five years. That’s similar in size to what the UK has offered Syrian refugees since 2014, prompting criticism that the new programme should involve higher numbers given Britain’s long involvement in the Afghanistan conflict.

Joe Biden has said the US will maintain an “over the horizon” counter-terrorism capability to neutralise the threat posed by Islamist extremist groups in Afghanistan. But as Jason Burke writes, with no troops on the ground, no intelligence-gathering operation in the country and no ally with shared borders, this kind of long-range effort to stop plots targeting the west will not be easy – and will be made significantly harder by the range of the organisations based in territory now nominally under Taliban control.

Brexit trade jump – Exports from Ireland to Great Britain soared in the first six months after Brexit as imports sent in the opposite direction declined, new figures showed. In a sign of post-Brexit imbalances in trade, the Irish Central Statistics Office said goods exports to Great Britain – excluding Northern Ireland – rose by 20% to €6.7bn (£5.7bn) in the first six months of 2021. That’s an increase of more than €1.1bn compared with the same period in 2020. At the same time, imports from Great Britain fell by more than €2.5bn, or 32%, to stand at €5.3bn. While all food and plant exports to the EU have been subject to sanitary and phytosanitary checks since January, countries including Ireland selling into the UK are not being subject to the complete panoply of red tape until January 2022.

Plymouth attack – Police increasingly believe that anti-women propaganda may have fuelled anger in the Plymouth gunman before his attack, with his links to the “incel” movement a main strand of their investigation. Jake Davison, 22, shot dead his mother and four other people on 12 August. It emerged that he had engaged with extremist ideology including the “involuntary celibate” movement. The Guardian has obtained CCTV footage of Davison from the day before the attack, showing him pacing around a convenience store for more than five minutes. The shopkeeper who recorded the clip said it suggested Davison “clearly was not in his right mind”.

> Thousands of people have been forced to evacuate as a wildfire raged near the French Mediterranean resort of Saint-Tropez. The blaze is the latest in a string of fires to ravage Europe this summer, aided by soaring temperatures and dry conditions.

> A group of about 20 protesters entered Edinburgh Castle on Tuesday evening, claiming to have “seized” the landmark under article 61 of Magna Carta. Police Scotland said officers were dealing with the protest.

> New Zealand is battling its first Delta outbreak, with seven cases now detected. The country went into a snap lockdown on Tuesday night, after one case was found Auckland.

> Model Lily Cole has apologised for posting a photograph online in which she is wearing a burqa as part of an attempt to promote her new book. The model and activist was criticised for posting the image in the same week as Kabul fell to the Taliban, raising fears for women’s rights in Afghanistan.

> The Lake District is seeing its natural beauty eroded faster than ever before, ecologists have warned, as a result of the climate emergency and a huge influx of pandemic walkers.

> Over in Sweden, researchers say climate change has seen its only remaining mountaintop glacier shrink by two metres in a year, as air temperatures rise and ice melts.

‘Menopause isn’t a disability’– Women going through menopause could be offered more legal protection against discrimination. MP Caroline Nokes, who’s leading an inquiry into menopause discrimination, said changing equality legislation should “not be ruled out”. That means considering whether menopause should be a protected characteristic under the Equality Act – like age, maternity or race. Nokes said MPs had heard plenty of stories of women who sought to bring a claim for unfair treatment using disability discrimination, adding: “menopause isn’t a disability.” She also warned businesses that fail to take action to help menopausal workers risk losing talent and productivity.

‘It just wanted to say hello’ – A three-metre-long python has surprised shoppers in a Sydney supermarket by slithering along a shelf in the spice section, with a Woolworths spokesperson saying it was a “slippery and rare customer”.

A Guardian investigation has revealed the pandemic has pushed children’s services to breaking point in some areas, as family breakdown and a lack of funding have resulted in a perfect storm.

The comic legends clicked on the set of 1986’s Three Amigos and have been a double act since. They talk fame, fatherhood and finding inspiration for their new series in Murder, She Wrote.

Raúl Jiménez has revealed that doctors told him it was a miracle he survived the skull fracture he sustained against Arsenal last November. “I feel like a player again,” the Wolves striker said as he reflected on his recovery from the injury that he sustained in an accidental clash with David Luiz, and which threatened not just his career but his life. Increased female participation is key to golf’s long-term future, R&A chief development officer Phil Anderton has said, and while the sport has made good progress in recent years, there is “a hell of a lot more to do”. Chris Silverwood, England’s head coach, has instructed his players to spend the short break before the start of the third Test against India putting aside the intense emotion that characterised the final day at Lord’s on Monday.

The England women’s team will face the world champions, New Zealand, twice this autumn as part of their preparation for the rescheduled 2022 World Cup. British No 3 Kyle Edmund has withdrawn from the US Open, as he is still not fit after undergoing surgery on a persistent knee problem in March. Harry Kane returned to training with his Tottenham teammates on Tuesday after completing his period of isolation, as the England captain prepares to make his first appearance of the season in the Europa Conference League. And the Arsenal women’s head coach, Jonas Eidevall, says he aims to win the Champions League during his time at the club, and that the challenge was fundamental in his decision to join from the Swedish club Rosengard.

Rishi Sunak has come under further pressure to suspend the state pension triple lock, after wage figures showed that the chancellor is on course to pay pensioners a rise of more than 8% next year. The pound was steady at $1.376 and €1.174, while the FTSE100 looks set for a positive start to trading on Wednesday.

The papers are fairly unified today with most – including The Guardian – leading with the UK’s plan to take 20,000 Afghan refugees . The Times quote prime minister Boris Johnson saying the scheme reflects the “debt of gratitude” Britain owes Afghanistan. The Daily Telegraph has home secretary Priti Patel urging other European countries to offer sanctuary to Afghans fleeing the Taliban. The Daily Express praises “Big hearted Britain” in its lead story on the scheme. The Mirror, by contrast, splashes with the headline “Save Them” and says the promise to resettle 5,000 refugees this year “just isn’t enough”.

The Daily Mail wraps the resettlement plan into a wider piece on the desperation in Kabul, writing that “terrified” Afghan interpreters were hiding in the airport in the capital last night as dozens of others were finally airlifted to Britain. The paper says the trapped translators said militant gunmen wanted to kill them before they could board RAF mercy flights.

Meantime, i leads with the Taliban pledge that it will not punish opponents – “‘Trust us,’ say Taliban”, saying Afghan residents are in hiding as militia raid homes and arrest activists. The Financial Times also picks up on the Taliban’s first public comments after seizing control of the country, vowing to protect the rights of women and grant amnesty to its opponents.

Hello, Warren Murray reporting for duty, and expecting to be with you at this time all week. Labour has accused Rishi Sunak of presiding over a “smoke and mirrors” budget. On Sunday, Sunak conceded that of £7bn to be...

Good morning, readers – a pleasure to bring you this morning briefing, and not least because it’s Friday. Millions of people could have their Covid booster jab brought forward, with ministers considering cutting the ...

Hello, Warren Murray introducing the stories that matter right now. England’s pandemic pupils could lose up to £46,000 in lifetime earnings because of the disruption to their learning – costing the economy up to £463...