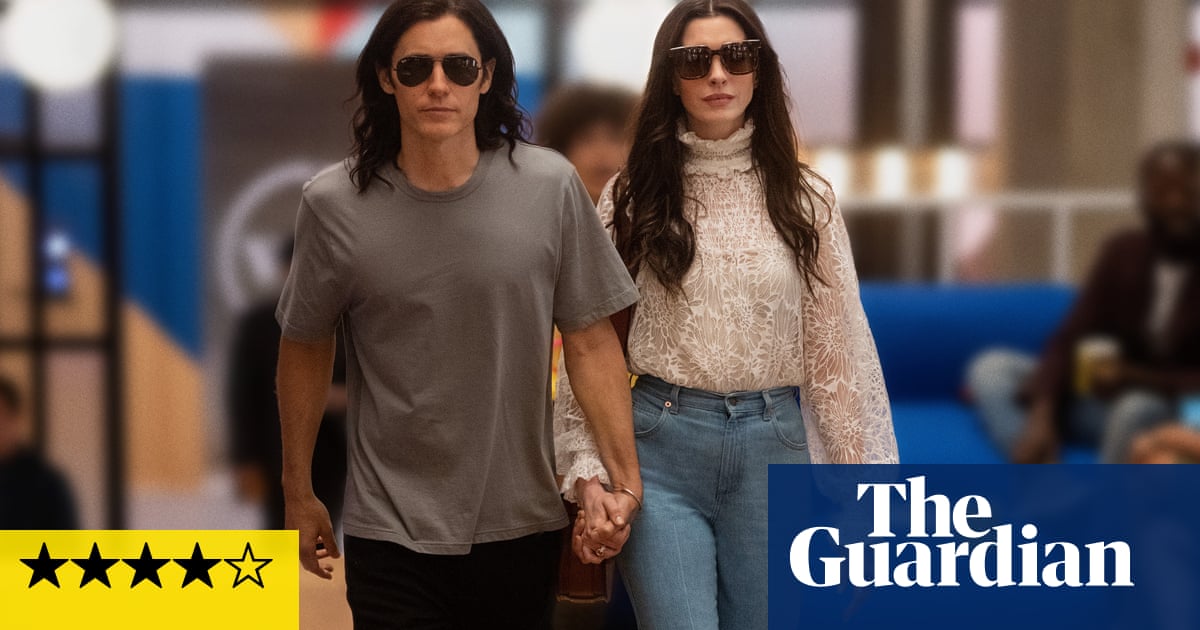 WeCrashed could equally well be named WeBoggle. This dramatisation of the already fairly dramatic real-life rise and fall of the property rental company WeWork is Apple TV+’s entry into the growing fashion for factually based dramas that have you rubbing your eyes in disbelief and then flailing around uselessly on the sofa trying to understand how, what, why and just how it all happened.

WeCrashed begins in September 2019, the beginning of the end of WeWork, as its founder, Adam Neumann, would like to know it. He is played by Jared Leto, who just about manages to channel rather than impersonate the charismatic Israeli-accented serial entrepreneur, although he and Tom Hiddleston also seem to be converging in appearance, which is confusing at another level. Neumann is about to be removed as CEO of his own company by the board (led by Anthony Edwards, playing a similar but more savvy version of his financier role in Inventing Anna, another show about the willingness of people to believe in a reality constructed for them by someone with endless chutzpah, nary a jot of documentation and barely more cash than that). The unicorn – the tech industry term for a privately held startup that gets valued at more than $1bn – is about to be severely hobbled.

We then jump back (and forth, a bit, but in not too vexing a manner over the eight episodes) to unpack the story of how Neumann and his wife/muse/cheerleader/enabler Rebekah (Anne Hathaway, just about navigating the journey from cousin of Gwyneth Paltrow ’n’ woo woo actress turned yoga teacher to billionaire ice queen) managed to snatch defeat from the jaws of triumph.

As my entire education in and understanding of US company structures, shareholdings, buy-ins and buyouts comes from multiple viewings of the Mike Judge comedy Silicon Valley (Succession was too complex, I’m afraid) I cannot tell you quite how WeWork came to be valued at $47bn at its peak, nor why it fell to $10bn the moment someone looked at some actual documentation. But I think it’s something to do with the fact that Neumann was a spectacular salesman and his wife reflected him back at twice his natural size. E, ovviamente, everyone got a bit blind to the fact that although WeWork’s buildings were filled with glamorous, trendy tech startups, it itself was a fairly standard real estate company. What “disruptive” innovation it seemed to sport was largely borrowed finery. Neumann’s $60m private jet probably didn’t help matters, either. Treating a company and its assets like your own personal fiefdom, even if you created it, tends not to end well.

What WeCrashed doesn’t do is bring us much in the way of insight into the structures, systemsor mindset that allow this kind of extraordinary untethering from reality in a field that is supposedly full of the brightest and best number crunchers there are. It’s a wonderful and deeply enjoyable tale of rags to riches to (relative) rags, but it panders to the viewer’s schadenfreude instead of offering anything meatier, or any wider perspective or criticism. Infatti, Judge’s Silicon Valley offers more in the way of analysis of the part greed and ambition play in skewing decision making, compromising people and principles and shaping every bend in the road between a vision and its eventual realisation.

There also remains something to be made or written about the financial value of charisma – WeWork helmed by Neumann had an almost cultlike quality. What’s the premium on attractiveness versus business acumen? Should we expect investors – who are, however rich, still human – to be able to resist it, or should we price in the possibility that they are at least a bit susceptible to promises so powerfully made?

Away from the business side of things, Leto and Hathaway create a convincing enough marriage between two narcissists (even if we cannot say, with its mix of simultaneously being supportive and toxic, how much it truly resembles the real thing). Yet they never really make their characters come alive as individuals. Their relationship buckles and bends under the pressures of near-bankruptcy and other self-induced vicissitudes of life – including Rebekah’s self-penned marriage vows, which anyone not directly related to Paltrow or to lesser Californians on both sides would be well advised to mute – but the couple (who now have five children) are still together today. So perhaps love really does conquer all? Or maybe just shared self-love? Or maybe only in the alt reality where we are all billionaires.

Although set in the nearish future in space, this multilingual sci-fi film feels quite of the moment, imbued with guilt and angst about environmental catastrophe, but also suffused with a sense of helplessness. Suo 2...