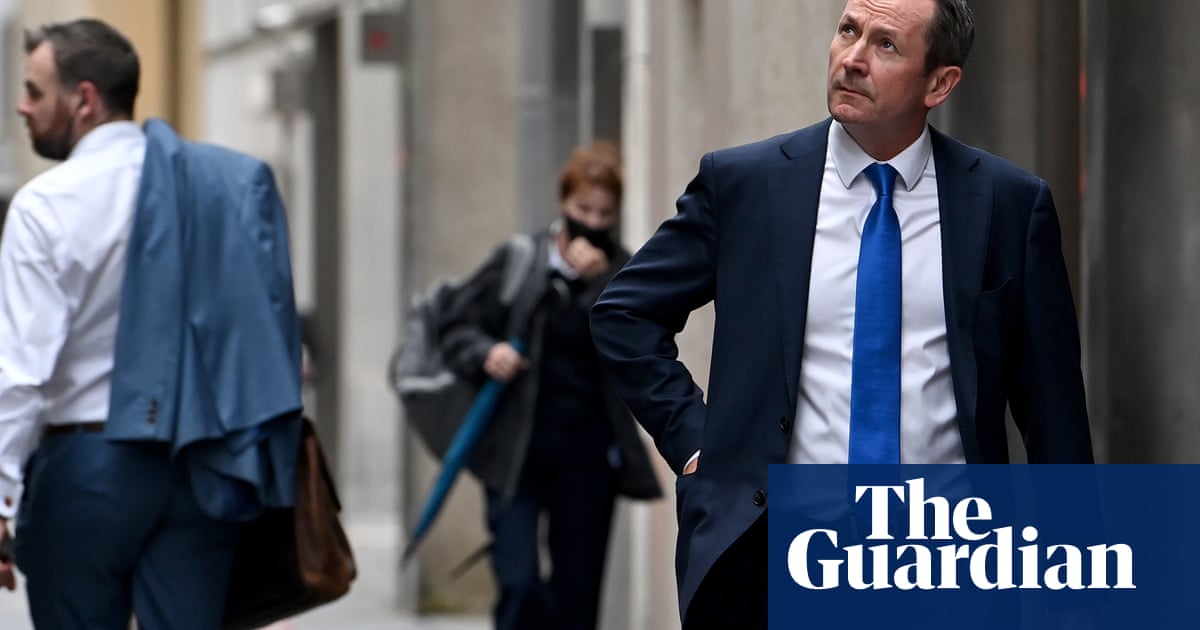 The premier was grilled on Wednesday about his personal communications regarding Palmer while being cross-examined in the federal court in Sydney.

Palmer is suing McGowan for defamation claiming the premier’s public comments – including labelling the Queensland businessman an “enemy of the state” – had damaged his reputation.

McGowan has lodged a counter-claim that he was defamed in several of Palmer’s interviews and statements.

The comments were made after Palmer had sought up to $30bn in damages over a 2012 decision by the former Liberal state government not to assess his proposed Balmoral South iron ore mine project.

The McGowan government introduced extraordinary legislation in August 2020 to prevent Palmer from suing the state.

McGowan messaged Stokes on 11 August alerting him to the introduction of the amending legislation.

Over the next three days, his daily newspaper, the West Australian, ran front pages variously depicting Palmer as the movie villain Dr Evil, a cane toad and a mosquito, the court was told on Wednesday.

Aan 14 Augustus, when the legislation passed, Stokes messaged the premier to congratulate him.

“Thanks Kerry. I was asked about those marvellous front pages today … I appreciate the support enormously,” McGowan replied. “All the mealy-mouthed tut-tutting by some people about Palmer’s ‘rights’ makes me sick.”

Barrister Peter Gray SC suggested it reflected an intense hatred of Palmer whom the premier wanted to attack and discredit “as often and as harshly” as possible.

“I don’t like Mr Palmer. I can’t stand what he does,” McGowan replied in court.

The court was shown messages between the premier and the WA attorney general, John Quigley, who will also give evidence in the trial.

Quigley labelled Palmer a “big fat liar” in one message, saying he was “looking forward to dumping on Palmer in statesman-like way”.

Asked whether that remained his view, McGowan said he had probably been exaggerating.

“I suspect there are worse Australians out there who are not in jail … people who have committed crimes and haven’t been found guilty," hy het gesê.

A high court challenge against WA’s hard border by Palmer and his company Mineralogy failed in 2020.

McGowan agreed that various barbs against Palmer, including labelling him an “Olympic-scale narcissist”, were intended to pressure the federal government into withdrawing its short-lived support of the case.

He acknowledged his description of being “at war” with Palmer was a prepared line which he repeated verbatim from talking points.

McGowan has claimed public statements by Palmer contributed to crazy behaviour including death threats against him and his family and a woman ramming her car into a power pole outside his home in November 2021.

WA police had said in media reports the woman was a drink-driver and the location was a coincidence, the court heard.

But McGowan, under questioning from Gray, maintained it was a deliberate act involving an anti-vaxxer.

“The woman in question, when my children went out to help her, screamed anti-vax sentiments at them and then ran off into the darkness," hy het gesê.

In his evidence last month, Palmer said he was scared because provisions in the Balmoral South legislation protected the government from criminal prosecution.

Referring to the fictional character James Bond and his “licence to kill”, Palmer told the court: “I didn’t know what the limits might be.”

The evidence concluded on Wednesday with justice Michael Lee expected to hear closing submissions in April.