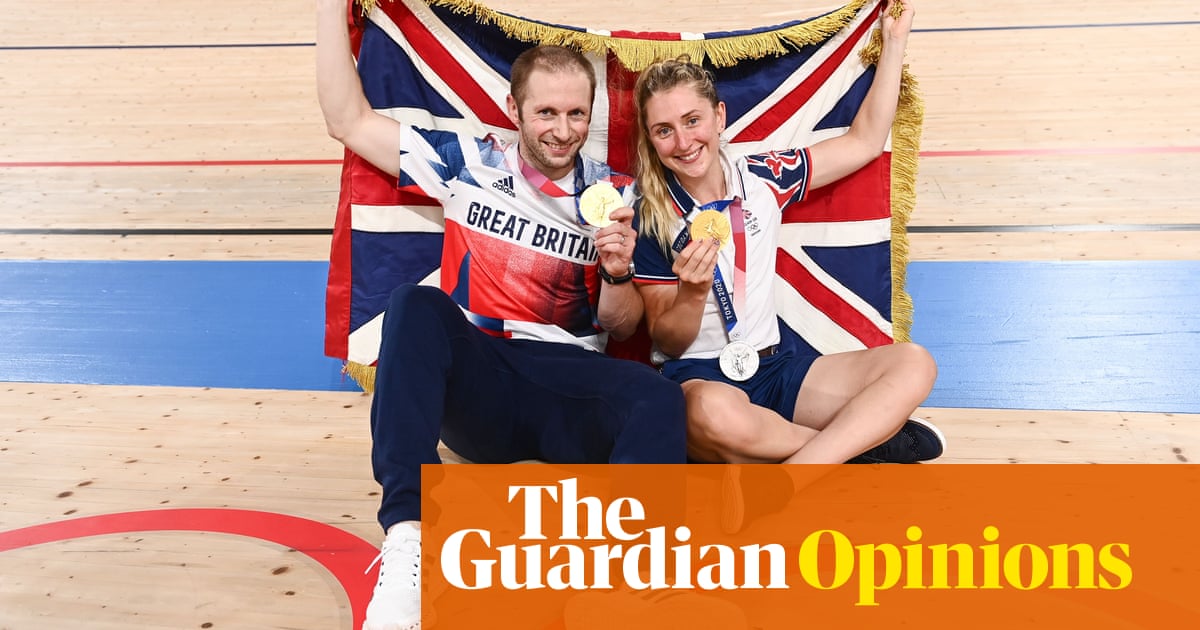 This was never going to be an Olympic Games quite like any other. The bike racing in Tokyo reflected that, and within that bubble so did the fortunes of Great Britain’s cyclists. It was a bizarrely apposite conclusion to a Games that had seen a string of one-off episodes on two wheels that Laura Kenny’s luck should run out in the cruellest style in the omnium, a discipline that she has made her own since its inception in 2012, while her husband Jason should become Britain’s most-crowned Olympian with a jaw-dropping gold medal in the keirin.

Sir Chris Hoy, the man Jason Kenny deposed as Olympic match sprint champion in 2012 after a fraught selection battle, compared his nemesis to a predatory big cat that spends most of its time asleep in the sun, turning into a ruthless apex predator at the flick of an eyelid. Kenny’s keirin opponents would concur that you cannot give the man a fraction of an iota of a glimpse of an opening.

You cannot call any win by Kenny a fluke, but the way he pulled this one out of the bag was distinctly outlandish. Few international keirins are won with an attack two and a half laps out but Kenny’s sustained acceleration through the brief, intense moment pointed to an unerring ability to gauge the effort, which – on reflection – might be expected of a rider who a few days earlier had anchored the Great Britain team sprint trio to a silver medal, albeit a painful one.

Kenny has reflected in the past on his status as the stealth champion of British sport a man who “likes to keep his head down” and just get on in his own quiet way, but since edging out Jason Queally and Craig Maclean for a sprint slot in Beijing, he has inexorably made his way past the two knights of the track, Hoy and Sir Bradley Wiggins, to become the nation’s most prolific Olympian.

The Kenny household is a competitive one – “When I won two gold medals there was no way [Laura] wasn’t going to get two,” he told me in 2013 – and there must be a chance that in Paris Laura Kenny will equal or overhaul her other half. Together with Filippo Ganna’s flabbergasting final kilometre to win the men’s team pursuit for Italy, her relentless, perfect madison gold with Katie Archibald was the highlight of a week’s track racing, but the loss of a clear run at a medal in the omnium through no fault of her own will have left a bitter taste.

Kenny was one of several victims of one of the worst pile-ups in international track racing in recent years, flying headlong into the boards after Italy’s Elisa Balsamo ran into a back wheel shortly before the finish of the scratch race; the crashes in this event and the men’s and women’s madisons suggest that some of the racers were ring-rusty because of a lack of racing through the pandemic.

Since Kenny took gold at the European championship in 2011, her personal party piece has become the elimination race in the omnium, so when the wheels came off in that discipline after she had staged a courageous fightback in the tempo race, it was clear that the impact had – not surprisingly – taken its toll.

Great Britain topped the cycling medals table but not in the way we have come to expect. There were no medals in road cycling, so Olympic inquests may want to examine why the men’s team featured three riders who had all fallen heavily at the Tour de France, and why GB only qualified one support rider for Lizzie Deignan. Tom Pidcock’s mountain bike gold confirmed his precocious talent, mientras que la plethora of BMX metalware could hardly have been predicted, but will give huge impetus to a discipline which is the best entry point to bike racing for most urban-dwelling youngsters.

In the velodrome, the long years of Great Britain’s dominance are finally over. The bellwether event, the men’s team pursuit, saw Team GB go home without a medal for the first time since Atlanta 1996. There was no British medal of any colour in any of the women’s sprint disciplines, a first since 2004, and the failure to find a replacement for Becky James, who retired in 2017, looks particularly glaring.

sin embargo, there is more than enough going on in terms of emerging talent – the bronze sprint medallist, Jack Carlin, y el men’s omnium champion, Matt Walls, to highlight just two – to suggest that currently the production line in the “medal factory” is being switched to a different mode rather than the whole operation stuttering. And few would bet against the golden Kennys jointly deciding that it’s not actually that long until Paris in 2024, via next year’s Commonwealth Games.