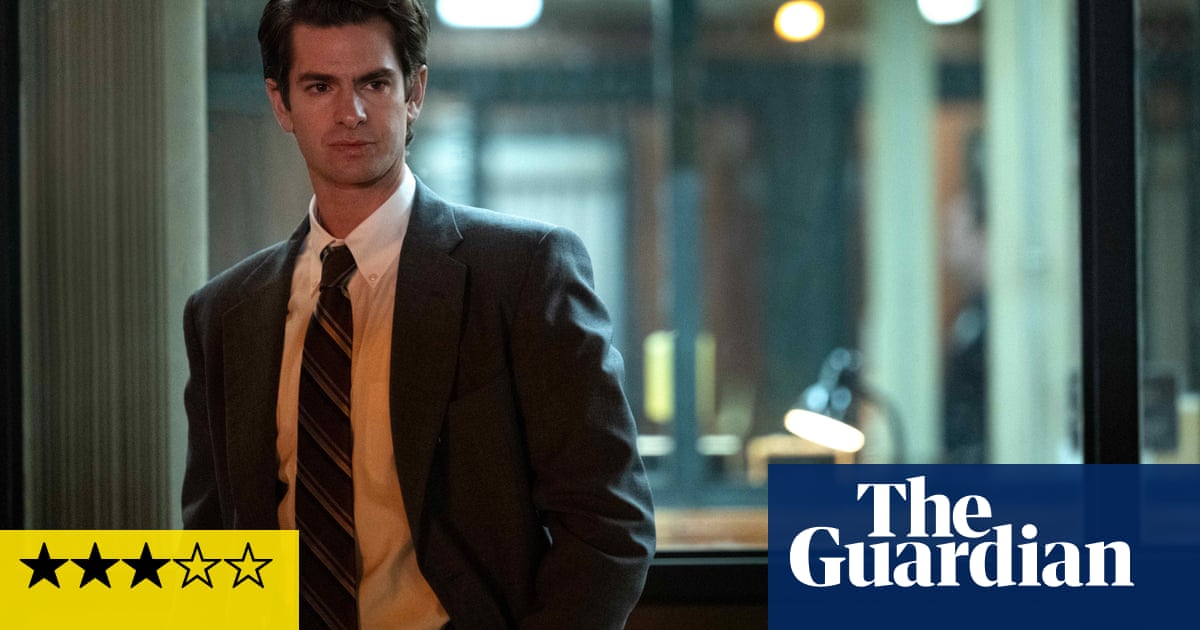 The predominant feeling throughout Under the Banner of Heaven, and ambitious and uneven adaptation of Jon Krakauer’s 2003 nonfiction book, is dread. From the moment in the first scene when a phone call takes detective Jeb Pyre (Andrew Garfield) away from his two young daughters, there’s a sense that Something Bad is coming, that each step forward will sink deeper into darkness. There’s that first horrific step down in the second scene, as Pyre recoils at a vicious crime scene. Director David Mackenzie’s camera spares you the bodies but not the blood – smeared on the phone, handprinted on the door, puddled on the kitchen floor.

The seven-part limited series, created by Oscar-winning screenwriter Dustin Lance Black (Milk), follows the investigation into who slashed the throats of 24-year-old Brenda Lafferty (Normal People’s Daisy Edgar-Jones) and her 15-month-old daughter in July 1984. But it also offers a steady stream of evermore disturbing revelations: the perversion of religious fundamentalism, the silence of religious institutions who choose pride over truth and, less effectively, the history of violence within the Church of Jesus Christ of Latter-Day Saints, more commonly known as Mormonism.

The real-life murders of Brenda and Erica are no mystery, and thus the show is not a whodunnit like HBO’s similarly bleak Mare of Easttown. Krakauer’s book investigated how gruesome violence could be committed in the name of faith, and how the LDS church obscured its ties to the fundamentalist groups that splintered following the church’s official ban on polygamy in 1890. (Krakauer had no official role on the TV series.) Nero, who was raised Mormon, casts a similarly harsh and probing light on the LDS church, both in the specifics to this case (an unwillingness to help Pyre’s investigation – the Laffertys, we’re told, were “Utah Kennedys”) and the conservative faith’s general subjugation of women.

The series attempts to translate Krakauer’s sweeping book through the overused prestige TV trop of multiple timelines. In the first – and by far most successful – of the three storylines, Pyre and his partner, detective Bill Taba (Yellowstone’s Gil Birmingham) peel back the rotten layers in the murder case through interrogations with the younger Lafferty brothers: Brenda’s distraught yet inscrutable widower Allen (Billy Howle), reticent Robin (Seth Numrich) and off-the-grid fundamentalist Sam (Rory Culkin). Taba, a Native American of Paiute heritage, offers a skeptical, hardened foil to Pyre’s pious good cop – and a reminder, both in presence and in dialogue, that he’s the only character with brown skin in the “99% white town” of American Fork, Utah.

By far the least successful storyline depicts Mormonism’s early days under founder Joseph Smith – himself a polygamist, although the LDS church did not admit this until 2014. Whatever support the Mormon historical record lent to Krakauer’s analysis in the book doesn’t translate here; the 19th century scenes – stark, hokey, mostly sans historical context – resemble budget History Channel re-enactments and do almost nothing to enhance the later stories. They’re jarring and unnecessary distractions to the much more nuanced, taut later timelines, not least because they require awkward narration from the present-day characters – particularly poor Allen, also tasked with explaining Brenda to us.

[object Window], because the modern scenes of characters torn between their faith and their morals could easily stand on their own. With his baby face and mostly smooth American accent, Garfield is more than convincing as a buttoned-up church guy fraying under the weight of cognitive dissonance – the gap between what he believes (that man is the authority of the household, that the church is the ultimate authority) and what he knows (that his wife is his equal, that Brenda and Erica deserve justice). Edgar-Jones, pure, captures this – some form of unbreakable spirit – in her heartbreaking portrayal of Brenda, a faithful Mormon and nascent feminist. At its best, the series digs into the always fascinating and confusing tension between instinct and instruction – how people see right when they’re told wrong, how people feel pulled to the truth. How beliefs molt and mutate. When that question gets center stage, the show becomes something more than a competent if muddled entry into the dead girls oeuvre.

As a whole, the series is almost always discomforting, relentlessly ominous and occasionally nauseating. (Avvertimento: if you, come me, find dog suffering/death to be unbearable, the second episode will be tough.) I don’t know if you can say it’s something inherently rotten about the LDS church, as the show sometimes seems to argue; what’s clear is that the church – an institution that secretly amassed a $100bn war chest – is more protective of its reputation than its people, like many other large institutions. Such institutions promise clarity, but people are messy. As a series, Under the Banner of Heaven struggles to maintain focus, but it never loses faith in that fact.

Nel 2017 Taika Waititi directed Thor: Ragnarok, which still strikes me as the best MCU movie, and a few years before that the superb and franchise-igniting vampire romp What We Do in the Shadows: both comedy gold, e ...