Ukraine crisis: US is prepared for Russian ‘aggression’, warns Blinken 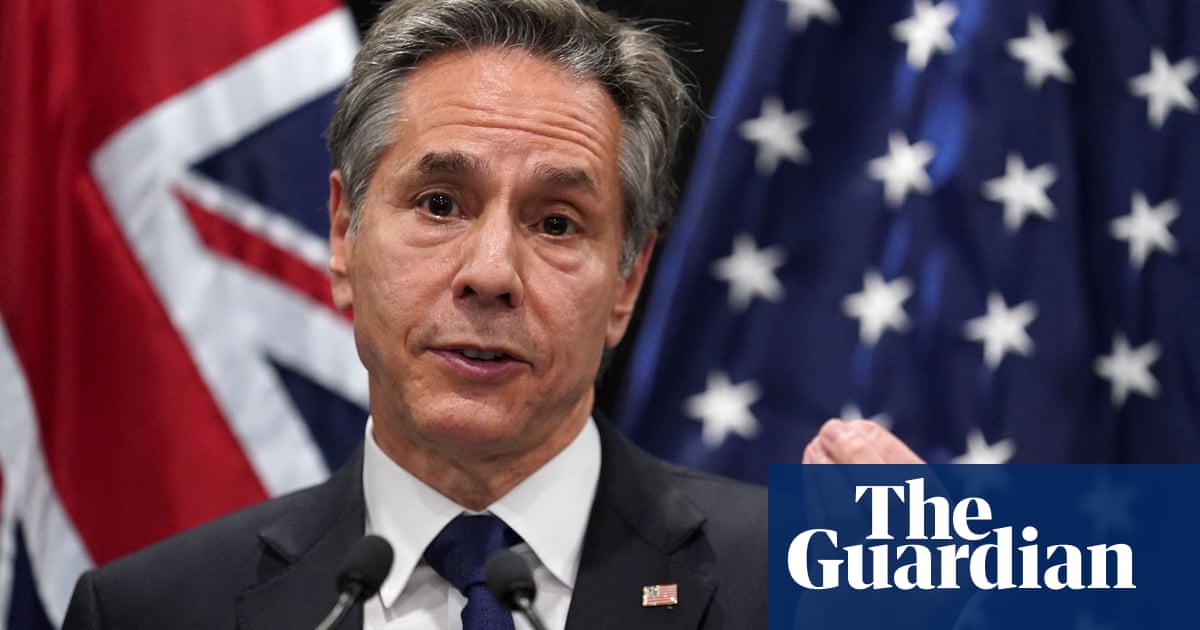 The US government used its first trip to Fiji by a secretary of state in almost 40 years to warn Russia to back off Ukraine.

Antony Blinken told reporters in Fiji he would speak to his Russian counterpart, the foreign minister, Sergei Lavrov, to advise that the US was prepared for either diplomacy or “aggression” and warned of economic sanctions in the event of an invasion.

“If President [Vladimir] Putin decides to take military action, we will swiftly impose severe economic sanctions in coordination with allies and partners around the globe,” Blinken said.

“We will bolster Ukraine’s ability to defend itself, we will reinforce our allies on the eastern flank of Nato.”

Blinken also made an apparent swipe at China, whose influence has grown in the Pacific region in the past few decades and pushed for a “a free and open Indo-Pacific”.

“Pacific Islanders are proud. They believe that no matter their size, they alone should be able to choose their path, whether that’s how they manage their natural resources, or who they partner with. We share that belief. And we think the world is a more secure and prosperous place when core international principles like that are respected.”

Blinken touched down in Fiji on Saturday for a whirlwind trip, lasting just over eight hours, the first secretary of state to visit Fiji in 37 years.

He was on his way back from Australia, where he attended the Quadrilateral Security Dialogue or Quad, a security partnership between the US, India, Japan and Australia. Blinken returns to the US via Hawaii which he will also visit for eight hours.

Fiji, with a population of just under 1 million, is located at the centre of the Pacific, making it the hub of travel and economic activity. Home to the headquarters of the Pacific Islands Forum, Fiji holds close diplomatic relations with Australia and New Zealand, who are its major trading partners. Over the past 15 years, while under sanctions by its western allies, the Fijian government established closer relations with China.

Blinken’s trip was widely seen as the US trying to bolster support in the contest for influence between the US and China in the Pacific.

Chinese presence in the Pacific Islands has increased significantly since 2006 to make them the third largest donor to the region. According to Lowy Institute research, foreign aid from Beijing was worth US $1.5bn and 8% of all foreign aid to the Pacific between 2011 and 2017. However, Chinese concessional loans tend to be for the large infrastructure projects in the islands.

Many Pacific islands now trade more with China than they do with Australia. Blinken announced the next US embassy in the region would open soon in Solomon Islands, whose trade with China accounts for almost half of all its trade.

Promising more innovative engagement in the Pacific in climate Change and trade, Blinken said the US would deepen its relationship with Asean, Apec and the Pacific Islands Forum, alluding to bringing the strength of its partnerships in other regions of the world.

“The United States is increasingly speaking with one voice with our Nato allies and our G7 partners, when it comes to Indo Pacific matters, you can see the strength of that commitment to the Indo Pacific throughout the past year.”

Pushing that it was part of the Pacific, Blinken pointed to the US’s history in the region as a sign of its closeness to it.

“It was here on these beaches that Americans shared some of the hardest fought battles in the second world war,” he said.

Blinken, who met 18 Pacific Island leaders virtually in Nadi, announced the US government’s new Indo-Pacific engagement strategy, calling the region “vital to our own prosperity, our own progress”.

A key way that the US is trying to establish itself as the diplomatic partner of choice for Fiji is through commitments on the climate crisis, which poses an existential threat for Pacific nations.

Blinken announced increasing USAID climate change funding for the Pacific saying a substantial portion of its $150bn commitment announced at Cop26 would be for the islands.

Further, the US government announced the Pacific Island countries were “prime candidates for the President’s Emergency Plan for Adaptation and Resilience or Pprepare initiative.”

“The thread that runs through all of our engagements with Fiji is that we’re working together in a spirit of partnership in a spirit of respect, to tackle shared challenges, to build upon shared opportunities to deliver concrete results for people on the issues that actually affect their lives. And that’s the approach behind our Indo Pacific strategy as a whole.”

The US secretary of state, Antony Blinken, is expected to press Paul Kagame, president of Rwanda, for the release of jailed dissident Paul Rusesabagina during his visit to the capital Kigali. Blinken is in Kigali on t...