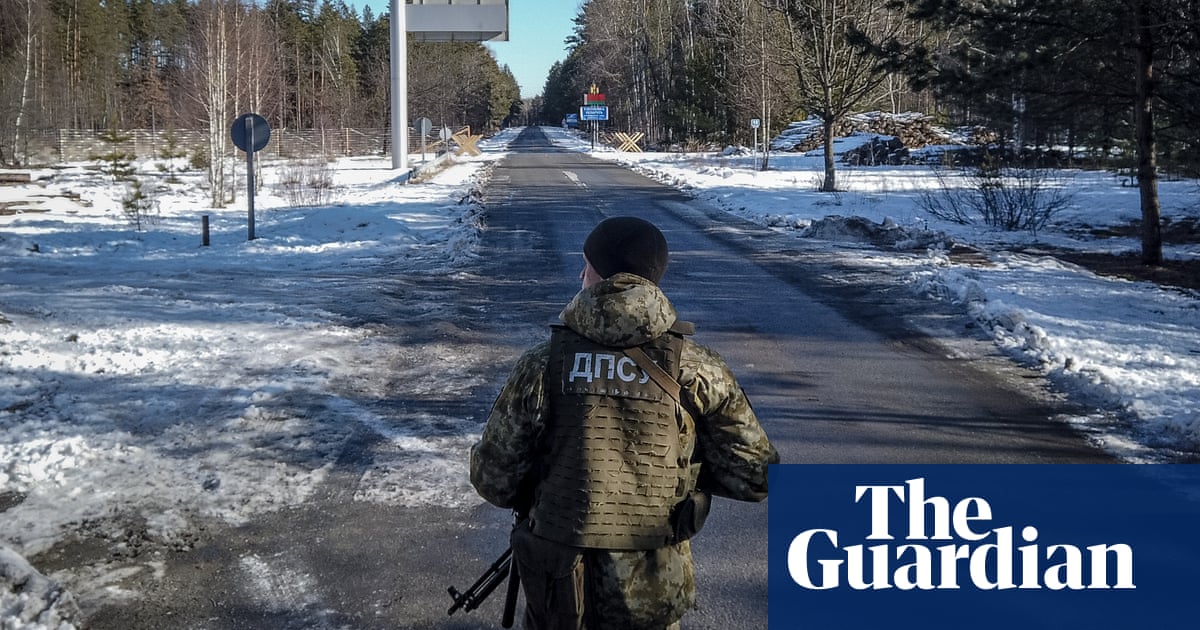 The German chancellor, Olaf Scholz, will travel to Kyiv on Monday as western leaders voiced concerns of a Russian invasion of Ukraine could happen at any moment, sending stock markets tumbling and the price of oil soaring.

On the eve of his departure, Scholz said that any Russia attack would lead to “tough sanctions that we have carefully prepared and which we can immediately put into force”.

“(These trips are) about how we can find a way to ensure peace in Europe,” he said.

Scholz and Ukrainian president Volodymyr Zelenskiy are expected to talk about how Germany could help stabilise Ukraine’s economy after fears of an imminent war took a toll on its currency. A moratorium on Ukraine’s eligibility for Nato accession was not on the table for Germany, a German source told Reuters, though Die Welt reported earlier a compromise whereby Russia would be assured that Ukraine would not join Nato “in the next 10 years” had been discussed in Scholz’s circles as a “thought experiment”.

Ukraine’s ambassador in London, Vadym Prystaiko, suggested to the BBC earlier that Kyiv “might” consider shelving its Nato plans if “pushed to it”.

The prospect of a Russian invasion sent shares plunging when the trading week began in Asia on Monday morning. The Nikkei in Japan lost 2%, the Hong Kong market was off 1.2%, and futures trade pointed to more selling on European bourses when they open later in the day.

The price of Brent crude soared 1% to a seven-year high of $95.46 over worries that a conflict in the region could disrupt supplies from Russia, a major oil producer.

On Tuesday Scholz is expected to use a trip to Moscow to press home the economic cost of an invasion of Ukraine, German government sources have said.

Meanwhile, Boris Johnson said he would hold further talks with world leaders to bring Russia “back from the brink” of war. His office did not say which world leaders Johnson was hoping to talk to or where he plans to travel, but it was understood he is keen to engage with Nordic and Baltic countries.

On Sunday, Zelenskiy urged Joe Biden to visit Kyiv “in the coming days” in a show of moral support. The White House made no mention of the invitation in its readout of the 50-minute call.

A White House statement said Biden made clear the US would “respond swiftly and decisively to any further Russian aggression” and the two leaders agreed on the need to continue pursuing diplomacy and deterrence. Biden has already ordered a near-total evacuation of the US embassy in Kyiv.

The latest moves come amid a signals in the west that time is running out to find a diplomatic solution to the crisis. US intelligence over the weekend claimed that Russia had accelerated plans for an invasion and could move troops across the border as soon as Wednesday, before the end of the Winter Olympics on 20 February.

Jake Sullivan, the US national security adviser, told the CBS News programme Face the Nation: “We have seen over the course of the past 10 days, dramatic acceleration in the buildup of Russian forces and the disposition of those forces in such a way that they could launch a military action essentially at any time.

“But of course, it still awaits the go order. And so therefore, we cannot predict the precise date or time that they make any action.”

Reflecting the West’s concerns, Dutch airline KLM cancelled flights to Ukraine until further notice. The Ukrainian charter airline SkyUp said on Sunday its flight from Madeira, Portugal, to Kyiv was diverted to the Moldovan capital. And Ukraine’s air traffic safety agency Ukraerorukh issued a statement declaring the airspace over the Black Sea to be a “zone of potential danger” and recommended that planes avoid flying over the sea from 14 to 19 February.

Russia denies it plans to invade Ukraine, but there were reports on Sunday of attack and troop-carrying helicopters being moved close to the Ukrainian border. Moscow failed to reply to a formal request from Ukraine to clarify the purpose of its military manoeuvres in Belarus by the 48-hour deadline set by the Vienna document, an international agreement intended to provide transparency and reduce the risk of war.

The Belarus government responded to a similar request from Baltic nations, but said that some of the Russian units on its territory were there to guard its southern border, suggesting they would not be leaving on 20 February, when the military exercises are supposed to end.

Ukraine’s foreign minister Dmytro Kuleba said the “next step” was requesting a meeting within the next 48 hours for “transparency” about Russia’s plans.

A submarine armed with cruise missiles from Russia’s Baltic fleet also sailed through the Bosphorus towards the Black Sea. Meanwhile, Lithuania announced a delivery of Stinger anti-aircraft missiles to Ukraine while the US embassy said a 17th planeload of US military hardware had arrived in Kyiv, including shoulder-fired grenades.

German government circles on Sunday talked of a “very worrying overall picture” on the Ukrainian border but rejected the suggestion that Scholz’s trip represented a “last attempt” at averting a war.

German government sources said Scholz would press home the “unity of the EU, the US and Great Britain” when it came to economic sanctions in response to an invasion. Biden has said a Russian invasion would spell the end of the controversial Nord Stream 2 pipeline, something Scholz has been more reluctant to spell out.

Scholz’s options during his trip to Moscow are limited. The Russian president is demanding “security guarantees” from the west, which would in effect undermine the sovereignty of independent states in east-central Europe and the Baltics.

German government sources said on Sunday Scholz would offer Putin a dialogue and seek to find out more what Russia’s grievances entailed. The broadsheet Die Welt said he could stress Ukraine joining Nato is not a realistic prospect in the near future, adding that a compromise whereby Russia would be assured that Ukraine would not join Nato “in the next 10 years” had been discussed in Scholz’s circles as a “thought experiment”, though not as a concrete plan.

Ukraine has expressed an interest in joining since 2002 but it would require the unanimous approval of existing members, based on factors such as a functioning democracy and an absence of “unresolved external territorial disputes”.

Tell us: how is the cost of living crisis affecting your social life?

The rising cost of living has led Britons to cut back on eating out, while pubs have described struggling to break even as customers visit their local less often. Meanwhile, soaring fuel prices mean that for those liv...