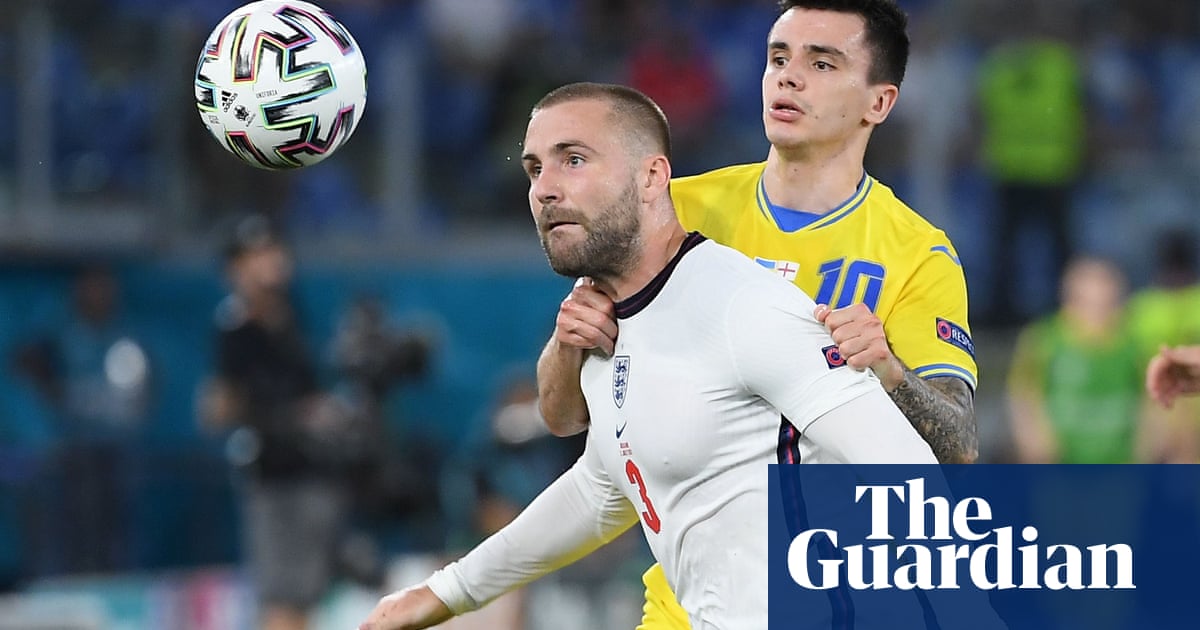 Georgiy Bushchan (GK) The goalkeeper was horribly exposed by a dismal defence. He made good saves from Kane and Rice but was unable to stop England’s goals. 6

Illia Zabarnyi (RCB) He had a stinker. England repeatedly broke down his side and he was nowhere to be seen when the pressure grew in the second half. 4

Serhiy Kryvtsov (CB) He was in a world of his own when Kane broke the deadlock. His positioning was poor and he departed injured in the first half. 4

Mykola Matviyenko (LCB) The Shakhtar Donetsk defender was all over the place. He was bullied in the air by Maguire far too easily when England doubled their lead. 3

Oleksandr Karavaev (RWB) The wing-back found it tough when Sterling ran at him. England created plenty of openings down his flank and he was eventually overwhelmed by Shaw. 4

Serhiy Sydorchuk (CM) He could not protect a faltering back four. Although he was confident in possession, he struggled when England upped the tempo after the interval. 5

Oleksandr Zinchenko (CM) He had a strong first half, unsettling England with a stream of cute passes. His movement was slick but he could not change the game. 7

Vitaliy Mykolenko (LWB) He was a threat on the left, giving Walker something to think about with his enterprising bursts, but he could not find a final ball. 6

Mykola Shaparenko (AM) He popped up into some dangerous positions at times, only to find himself wandering into territory patrolled by Rice and Phillips. His influence was minimal. 5

Andriy Yarmolenko (CF) He struggled to get into the game. He was desperate to work the ball on to his left foot. England made sure it never happened. 4

Roman Yaremchuk (CF) The striker almost equalised in the first half and his hustle made him one to watch. He was not to blame for his defence collapsing. 6

Viktor Tsygankov (for Kryvtsov, 35最小) His arrival in the first half heralded a switch to 4-4-2 から Ukraine, who began to threaten. But he was at fault for Henderson’s goal. 5; Yevhen Makarenko (for Sydorchuk, 64) 6

Jordan Pickford (GK) The goalkeeper was in the right place in the first half, saving smartly from Yaremchuk. He kept his fifth successive clean sheet after denying Makarenko. 8

Kyle Walker (RB) He had some dozy moments in the first half, gifting Yaremchuk a chance with a slack pass. But he contributed to a solid defensive display. 7

John Stones (CB) He reacted well when Yaremchuk found space, forcing the striker wide for his chance. He has not put a foot wrong all tournament. Utterly focused. 8

Harry Maguire (CB) His recovery from an ankle injury has been such a boost. His defending was forceful again and he calmed the nerves with a bullet header. 8

Luke Shaw (LB) He must have loved conjuring two lovely assists on José Mourinho’s new patch. His deliveries were spot-on and he always looked difficult to beat. 9

Declan Rice (CM) Another alert, composed display. Offered brisk passing, went close from 20 yards and was around to mop up any danger. Southgate saved him for the semi. 9

Kalvin Phillips (CM) He had to be disciplined when Ukraine started to stroke the ball around midfield. Avoided picking up a booking that would have brought a suspension. 8

Mason Mount (CM) Started quietly after returning to the side but he worked hard. He had a role in Kane’s second and made Henderson’s goal with a good corner. 7

Jadon Sancho (RW) There were some exciting flickers on his first start of the tournament but he can produce so much more. The youngster’s defensive work can improve. 6

Harry Kane (CF) The captain picked up where he left off against Germany, taking both of his goals with typical ruthlessness. He looks confident and sharp again. Ominous. 9

Raheem Sterling (LW) The winger was at it again, playing a clever pass to Kane for the opening goal. He went on to trouble Ukraine with his dribbling. 8

Jordan Henderson (for Rice, 57) The vice-captain almost missed the tournament with a serious groin injury. Joy was etched all over his face when he headed in the fourth goal. 7; Kieran Trippier (for Shaw, 65) 6; Marcus Rashford (for Sterling, 65) 6; Jude Bellingham (for Phillips, 65) 6; Dominic Calvert-Lewin (for Kane, 73) 6