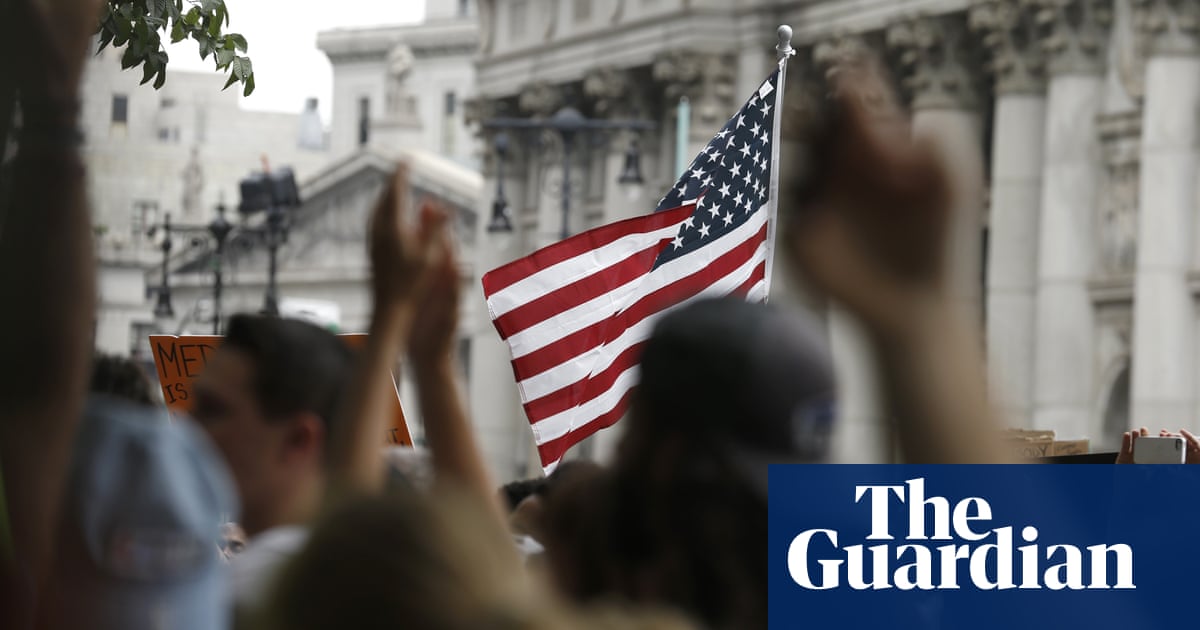 At a rowdy rally to protest against mask mandates in New York on Monday, some participants carried Australian flags and joined in with chants such as “Save Australia”.

Many Australians were puzzled by what seemed a sudden, unbidden show of support, but this spectacle was the culmination of a months-long effort in conservative US media to portray Australia’s coronavirus response as having brought the country to the brink of authoritarianism.

Polling suggests that Australians overwhelmingly support vaccine mandates, but prominent figures on the American right have had crucial assistance from their counterparts across the Pacific in creating a dystopian image of the country, which they have wielded as a weapon in the polarised pandemic politics of the US.

Days before the New York event, Tucker Carlson devoted the opening monologue on his nightly Fox News program to the proposition that Australia “looks a lot like China did at the beginning of the pandemic” and painted lockdowns in the darkest possible hues, connecting them with the 2019 Australian federal police raids on the ABC.

Carlson, whose show is the highest-rated news program on US cable television, according to Adweek, also seized upon the use of the phrase “new world order” by the New South Wales chief health officer, Dr Kerry Chant, at a press conference.

That phrase has long been invoked by conspiracy theorists as a term for the imposition of a worldwide totalitarian government by a shadowy global elite. After Carlson played the relevant clip of Chant, he remarked: “The new world order. She said it out loud.”

But Carlson did not have to make his case alone. For a local view, he interviewed the director of the libertarian Institute for Public Affairs, Gideon Rozner, who readily agreed with Carlson’s take, and claimed: “I don’t think it’s possible to say that Australia right now is a functioning liberal democracy.”

Carlson’s Fox News colleague Laura Ingraham has pursued the idea of an Australian dystopia even more aggressively, if anything, on the cable news channel and on her conservative talk radio program.

And again, she has drawn on fringe figures in Australia to lend her message authority. On Thursday, she hosted self-styled “freedom lawyer” Tony Nikolic, who has tried to sue Chant and the NSW health minister, Brad Hazzard, over mandatory vaccination.

Ingraham has been on the attack over Australia’s pandemic response since at least August, when she interviewed Liberal National MP George Christensen, after a video of his anti-lockdown parliamentary speech had been removed from Facebook for breaching the platform’s Covid misinformation policy.

The video of that interview, containing a lengthy excerpt of the banned speech, remains on Ingraham’s own Facebook page.

The usefulness of the nightmare vision of Australia can be seen in the way the New York rally and its dark message were boosted internationally by right-wing influencers and media.

This feedback loop between Australia’s fringe right and the major organs of US rightwing media has been in place throughout the pandemic, but it has become particularly intense as Australia – once a border-controlled, Covid-free oasis – has struggled with outbreaks in New South Wales and Victoria.

Heidi Beirich is co-founder of the Global Project Against Hate and Extremism, an NGO set up to combat transnational far right extremist groups.

Asked about the American far right’s depiction of Australia’s Covid response, Beirich wrote in an email: “We’ve seen more and more cases where the far right brings up concerns, usually based on disinformation, about horrors taking place in other similar countries.”

She added: “This has happened a lot since the pandemic as anti-mask and anti-vax conspiracies have thrived among the far right, especially online.”

It has also been cemented by the cross-pollination between some Sky News Australia personalities and some of their Fox News counterparts in the US. When Sharri Markson, a journalist with the Australian and a Sky host, went on Carlson’s show in August to denounce the YouTube ban on Sky News as “the most extreme cancellation of free speech imaginable”, it gave Carlson the opportunity once again to characterise Australia as a “Covid dictatorship”.

The idea of Australian tyranny has spread far beyond the rightwing media bubble. Florida governor Ron De Santis – whose state’s Covid death rate is some 50 times Australia’s – suggested the US should review diplomatic relations with the country, asking whether it was freer than communist China.

Further down the pecking order, and even further to the right, the response to Monday’s rally struck the same notes that conservative media hosts have for months.

The British anti-Islamic activist and convicted criminal Stephen Yaxley-Lennon, also known as Tommy Robinson, posted wildly on rightwing social media platform Gettr about the rally, and repeatedly invoked the idea that Australia had descended into authoritarianism.

Robinson’s posts were dutifully echoed by the likes of Milo Yiannopoulos and at least one Proud Boys chapter, with each using the only social media platform still available to them, the anything-goes messaging app Telegram.

The rightwing activist Andy Ngo also plugged the antivaccination event, without troubling to measure it against the reality of Australia’s pandemic response.

Their coverage was echoed by their Australian counterparts such as Avi Yemini, who gleefully received and promoted news of the rally on Telegram.

Far-right US websites have also joined in. In the past week, conspiracy-minded outlets have been describing Australia as moving towards “a complete tyranny” on the basis of a Victorian home quarantine trial that requires participants to send selfies to prove where they are.

In reaction to the same story, Gatweway Pundit boss Jim Hoft claimed that “AUSTRALIA IS LOST”.

The real goal may be discernible in the attempts to construe Australia’s response as a warning about what might happen in the US, and to tie it to American liberals, even though no governing Democrat has introduced any comparable restrictions.

The Daily Caller made it plain in a Wednesday headline asserting that “Australia’s COVID Police State Is The Future Liberals Secretly Want”, atop an article which asserted, without evidence, that Australia’s restrictions “have been depicted by many American liberals and corporate media outlets as a ‘model’ to emulate”.

Beirich, the anti-extremism researcher, said that the far right mobilisation of the idea of Australia’s lockdown as “America’s dystopian future”, and the transnational collaboration around the idea, “shows that the far right scene in many places comes together nowadays in ways that it couldn’t before – and that’s due to social media and the web, where this disinformation and conspiracy material flourishes”.

Australia may not be so much an object of genuine concern for the right in America as it is a cudgel with which to beat their enemies closer to home.

The Australians who help them receive, in return, a short turn in the global spotlight and an opportunity to represent their own views as majority opinion.

Australia has suspended flights from nine southern African countries and closed its borders to any foreign nationals who have been to the region, amid concern about the emerging Covid-19 variant of concern, Omicron. T...