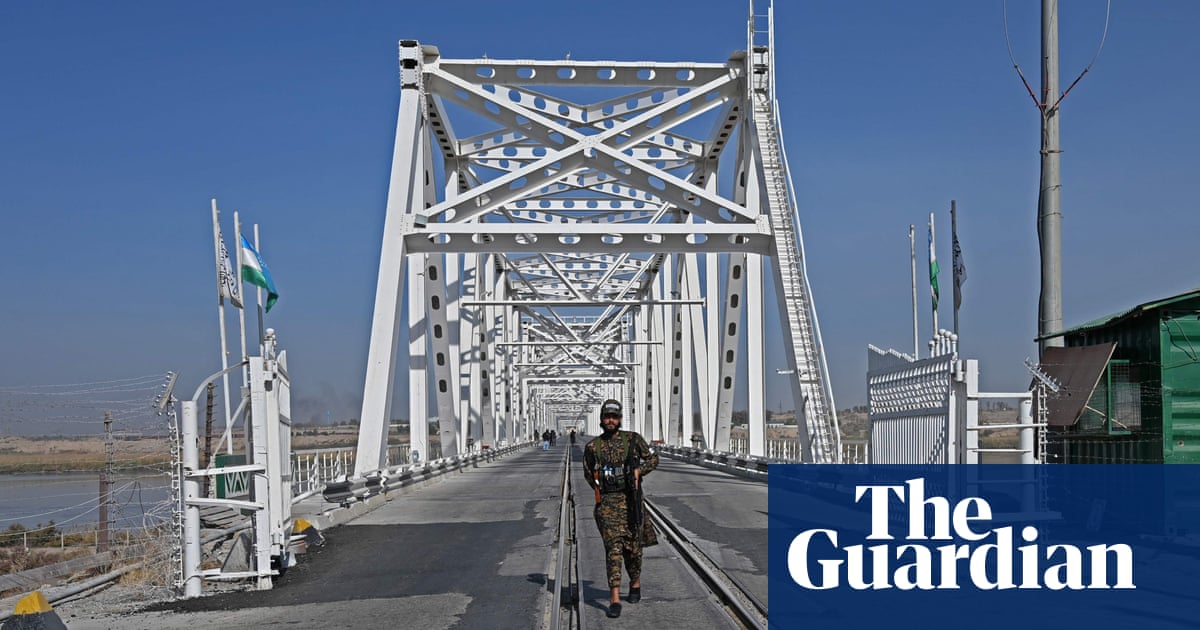 Two suspected Islamic State recruits, one of them carrying a British passport, were seized by the Taliban when they tried to slip into Afghanistan last autumn through its northern border, the Guardian can reveal.

The men, who were carrying more than £10,000 in cash, military fatigues and night-vision goggles in their bags, were arrested after a tipoff from Uzbekistan, according to a Taliban source with knowledge of the operation.

“There was one passport from England and one from another country in Europe,” said the source. He discussed the men’s capture at the border crossing of Hairatan on condition of anonymity as he was not authorised to speak to journalists.

An Uzbek source said both men were using British passports when they flew into the Uzbek capital, Tashkent – it is not clear whether one also had a European passport that he used at the Afghan border, or whether the Taliban source was confused – and both had Afghan heritage.

Their interception was a stark reminder that while the west was able to end its war in Afghanistan by withdrawing troops, there is no such simple resolution to the security threat posed by international terror groups that shelter inside its borders.

Hundreds of Britons went to live under Islamic State in Syria and Iraq, but this is the first time UK citizens have been intercepted allegedly trying to join the group in Afghanistan, and the first reported case of attempted international recruitment to IS since the Taliban took power in the country.

Two French citizens are reported to have travelled from central Asia to join Islamic State in Afghanistan several years ago, and another was intercepted in 2017 by Tajik authorities, tried and jailed for five years.

The Islamic State’s affiliate in Afghanistan – known as Islamic State Khorasan (ISK), after a historic name for the region – is well funded and resilient.

It has carried out multiple large-scale suicide attacks in Kabul and other big cities since the Taliban took control of the country last year, and now has a presence in every province in Afghanistan, a senior UN official said in November.

ISK is one of the few options left for westerners drawn to violent extremism in the name of Islam now that the Syrian civil war has largely been reduced to a bloody stalemate in a corner of the country.

“One of the reasons people are heading to Afghanistan is simply that there is nowhere else to go. It is perhaps the most likely place for aspiring jihadists who want to see combat,” said Ashley Jackson, an expert in armed groups in Afghanistan and the author of Negotiating Survival, about civilian relations with the Taliban insurgency.

An Uzbek source confirmed that authorities there flagged up the two men to Afghan authorities for checks because they had triggered intelligence concerns but had not violated any Uzbek laws – the country has visa-free entry for UK passport holders – and were not on Interpol wanted lists.

They told border guards they had family ties to Jalalabad, the capital of eastern Nangarhar province, and initially claimed they were travelling to visit relatives, the Taliban source said. However, they struggled to explain their luggage.

As well as cash and military fatigues, they had packed combat vests that the source described as “suicide vests without explosives”. When questioned, the men reportedly claimed these were just things they found “interesting”.

They flew into Tashkent and then made the 430-mile (700km) journey to the border crossing by road, the Uzbek source said. They are thought to have collected at least some of the military gear on the way.

Although a flight to Islamabad would have offered a much shorter overland journey to Afghanistan’s east, currently the main ISK stronghold in Afghanistan, the men would have needed a visa to enter Pakistan if travelling on UK passports.

The Guardian saw photos of the men taken soon after their arrival in Afghanistan. Their appearance matched descriptions of two men whom Taliban members have accused of Islamic State links, independent Afghan sources said.

The 9/11 attacks in 2001 drew troops from the US and its allies to Afghanistan to topple the Taliban because they had offered safe haven to al-Qaida. Thousands of lives and billions of dollars later, the Taliban are back in power, and although al-Qaida’s leader Osama bin Laden is dead, his legacy lives on.

British and US intelligence officials warned even before the Taliban took Kabul that the terror threat from Afghanistan was likely to grow with the group in charge, while western ability to monitor it declined precipitously.

The Taliban promised Washington, in the deal that paved the way for America’s withdrawal, that they would not offer save haven to international terror groups. But it was a commitment beyond their power to keep, even if they wanted to.

Islamic State and the Taliban have been at war since the group first emerged in the region in 2015, drawing recruits from other international extremist groups. It was beaten down by the combined efforts of US, Afghan government and Taliban forces until 2019 but has since rebuilt. It got a strong boost from Taliban-orchestrated prison breaks in the final days of the republic, which returned between 2,000 and 3,000 fighters to the battlefield, according to a recent report on the group’s resurgence.

They included the man thought to have carried out the bloody attack on Kabul airport in the final days of the foreign evacuation last August. More than 400 were foreign fighters, from across central Asia and beyond, including a handful from Jordan and the Maldives, the report said.

“My worst fear is that the Taliban underestimate the challenge of combating terrorism as a government,” Jackson said. “They were very effective at taking on Islamic State when they were fighting a rival insurgent group, but it is very different to be an incumbent state power.

“It is not in Taliban’s interest to have these groups operate, but we should not underestimate their arrogance and incompetence. They don’t have money, capacity, resources to secure borders, surveil groups and respond.”

Recent Islamic State suicide attacks have been a show of their reach, including ones targeting the Taliban leadership at a family funeral service, and another in Kandahar city, where the group has deep roots and solid support.

Abdul Sayed, an analyst focused on extremism in Afghanistan, and co-author of the report on ISK, said: “It was an exhibition of strength carrying out for the first time a very brutal attack in Kandahar, stronghold of the Taliban, a message that if we can strike here, we can carry out attacks anywhere in the country.”

For now, their focus is mostly domestic and regional. Although some westerners may try to find their way to the group, they are not being actively targeted.

“I don’t think ISK will be inviting or welcoming foreign fighters at least until they have an area of territory more firmly under their control. Supporting foreign fighters is an expense and a liability for them,” Sayed said. “They claim to have global ambitions, but I haven’t seen any particular direct threat from their propaganda materials against the west or any western countries specifically. For now they are more directed to regional states.”

They are recruiting widely in Afghanistan, from extremist Taliban disillusioned with compromises on hardline doctrine, from poor Taliban footsoldiers who need salaries the government cannot pay, and even from the ranks of former government forces who feel they need protection from Taliban revenge killings.

In response the Taliban has deployed harsh tactics, reportedly including extrajudicial killings of young men in eastern strongholds. The two British men, who were taken to the regional capital of Mazar-e-Sharif from the border, may have faced similar treatment.

“The mujahideen are very aware of Daesh and are working on this issue very hard,” said the Taliban source, when asked about how the men would be treated. He had no direct information on their future, but general policy for IS detainees was clear, he added. “The rules from our leader are to just finish them, don’t let them do anything. No mercy.”

Afghanistan has a long history of human rights abuses committed by all sides in its long-running conflict, intended to stamp out opposition. They usually have the opposite effect, driving recruitment from angry and bereaved communities, and if Islamic State in Afghanistan gets stronger, it will not only be the Taliban’s concern.