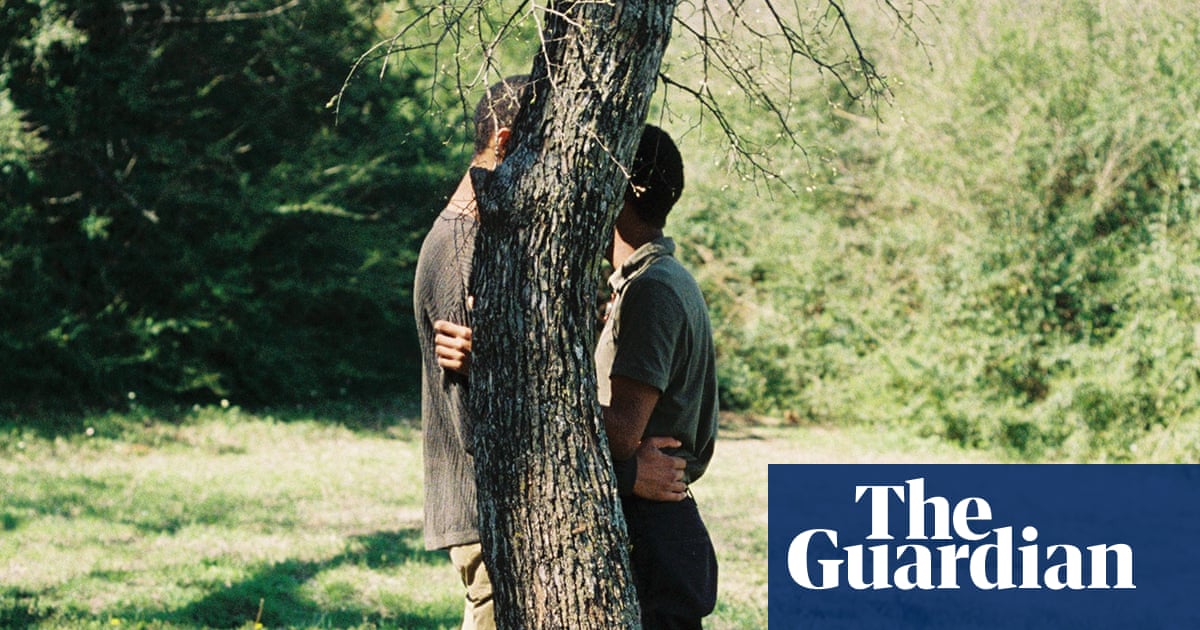 In 2018, I was visiting my cousin in Dallas when I remembered that a friend from Portland had moved there. I hadn’t seen him in a while and heard he had a new partner, so I asked if he wanted to catch up. The minute I saw him and his boyfriend, I wanted to photograph them. They were both wearing similar clothes, and something about the matching colour palette made them feel like a pair. We took a walk through Como Park, where I spotted this tree. I asked them to stand behind it and embrace each other, with their faces obscured.

What struck me was the interplay of intimacy and anonymity. It’s this tender moment, slightly hidden. We can see that it’s an embrace, but we can’t see who it is. It’s a private moment but in a wide open public space. It made me think about how they – and I – as queer Black men, struggle to be seen for our true selves in different spaces.

At the time, I was making a lot of work that played with the idea of hiding, being in the shadows. Lots of my subjects were anonymous. Sometimes that was to protect their identity, other times just to make them more comfortable. With a face, you see it and it’s beautiful or it’s familiar or it’s whatever you might feel. When it’s anonymous, there’s ambiguity. That creates space for the viewer to put themselves into the scene.

I want to create an archive of images I would have liked to see while I was growing up. When I was younger I did not see images of Black queer men, particularly not in this soft light or in these tender moments. A lot of images of queers throughout history are nightlife scenes, or bodies tangled together on piers – often moments of hedonism that don’t make space for the more mundane or domestic things in everyday life.

And much of the representation of Black men was a kind of Boyz N the Hood aesthetic – hypermasculine roles that didn’t capture me or the people I knew. So I’m creating what I didn’t see in the hope that young queer people can fast-forward through some of the shame or guilt that they can be made to feel about their identity and sexuality. I feel like if I had been exposed to this imagery, or if the education system had had a space for queer existence, it would have helped me avoid a lot of pain, uncertainty and grief.

Some of these kinds of images do already exist. But so many of them have been lost, and even those that are contained in archives or museum collections, you’ll often find that the photographer is unknown, or that the person who made them wasn’t a photographer as such – it was just something they pursued on the side because there wasn’t space for them to create work in that world.

Things are changing, though. People are beginning to understand that these images are worthy of space and consideration. Today there’s less gatekeeping and more artists and curators of colour, more spaces for minority artists.

I don’t think of my photography as portraiture. I see it more as capturing a moment in time, a specific experience in which I’m the viewer as much as anyone else. Most of the work I make is of people I know. They can be old friends, or just acquaintances, but it’s important that I establish a relationship with them. On the rare occasions I’m photographing people I don’t know, I’ll usually get coffee with them first, or even make a meal together, so that when we come to making the images there’s a level of ease, comfort and respect.

I hope that shows in the images. And I hope my work encourages other people like me – who haven’t been to art school, who’ve come from minority communities – to believe in themselves.