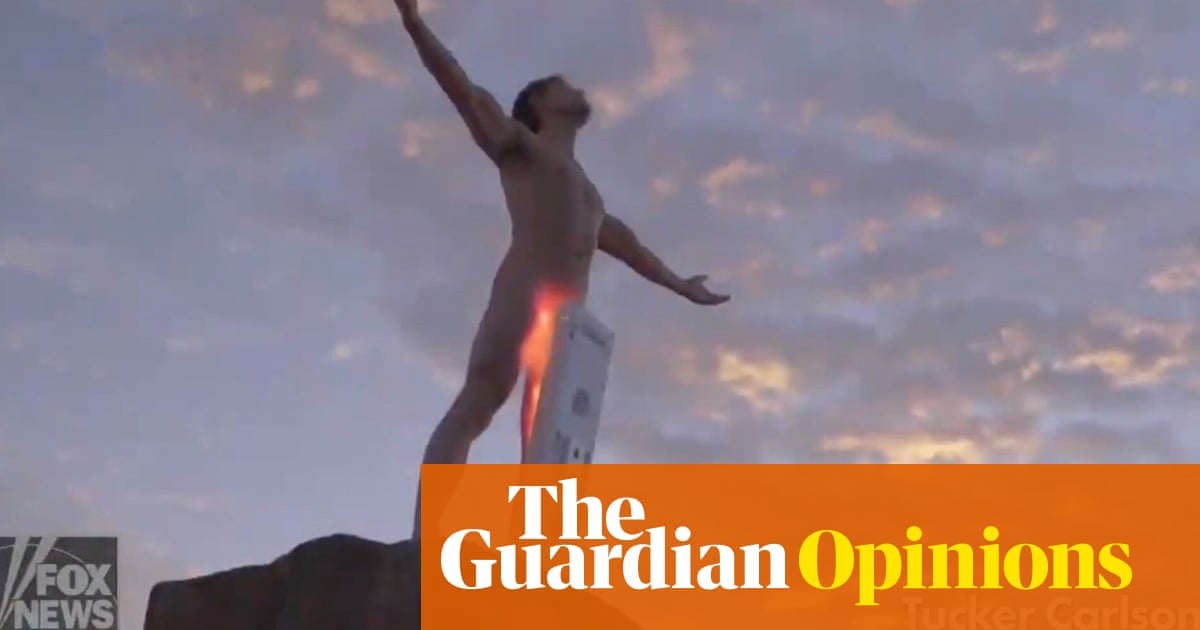 Are there three words in the English language that can strike quite as much trepidation into the hearts of the sane and rational person as “Tucker Carlson original”? Yes, the documentary strand that brought you such titles as Hungary vs Soros: The Fight for Civilization and Patriot Purge, a BS-laden fantasy about the January 6 riots that contained so many bonkers claims about false-flag operations that it forced a tranche of Fox News veterans to quit the network, has returned.

The latest addition to the Carlson oeuvre is called The End of Men and its Magic Mike-style trailer just dropped.

It begins with a familiar Make America Great Again-style montage, centering on a John F Kennedy speech in which he extols the virtues of strength and exercise and berates America’s “soft, chubby fat-looking children”. Quickly, Kennedy’s reasonable-for-the-time approach to childhood obesity is equated with a precipitous decline in sperm counts and testosterone over the last 50 years.

And then what could only be described as a series of money shots. As the booming timpanis of a Richard Strauss piece from 2001: A Space Odyssey swell – we see huge buff topless men, cutting wood, milking cows, firing guns, barbecuing, fighting, drinking egg yolks and most strikingly, tanning their genitals. This supposed sequence of real red-blooded males is perhaps the campest thing Fox News has aired since Glenn Beck doused a handsome model in gasoline.

The testicle tanning, or “red-light” therapy, shown in the video is explained further in an interview Carlson does with a self-proclaimed “bromeotherapy” expert. He claims that by dousing your balls in red LEDs, you can create higher levels of testosterone.

The potential for UV or red light to increase testosterone levels has been quite well documented but there are no peer-reviewed double-blind studies that are able to prove these claims. Testosterone levels also change dramatically throughout the day, and also see dramatic increases from exercise, new sexual partners and changes to diet.

It’s no surprise to see Fox News suggest that the answer to all of mankind’s problems are testosterone related. The channel is heavily invested in the idea that a decrease in testosterone is making men more liberal and less masculine, and many of its remaining advertisers sell pills that promise to increase men’s testosterone’s levels.

I spent some time reporting this story three years ago, that testosterone was becoming heavily politicised, particularly by Trump-supporting radio hosts who equated liberalism to having low T (one rightwing radio doctor even offered a free testosterone test to any listener thinking about voting for Hillary Clinton). The US is awash with ads for testosterone supplements that make a similar claim, many of them airing on Fox News. Trump himself used to insinuate that his opponents were tired and had “low T”.

Many men are injecting themselves with testosterone with political motivations but in reality the idea that testosterone is the “male” hormone and oestrogen is the “female” one is wrong. Both men and women have both hormones, at highly varied levels, and most men have far more testosterone than they need (indeed, testosterone, which is critical to heart function, is often converted into oestrogen, which means that people who routinely inject testosterone often end up growing breasts). Low testosterone can make some men feel tired and impotent and they need replacement therapy, but others get by on low levels of blood testosterone just fine.

Carlson is right that sperm counts and overall testosterone have been decreasing over the last 50 years due to lifestyle changes – including rising obesity. But the idea that this in some way is a problem of manliness, and that if only we tanned our balls men would become happier, is patently untrue.

The show is also a reflection of how far Carlson has shifted into the world of pseudo-scientific and bezerk solutions in the past few years. Just four years ago he was still talking about falling testosterone levels but as part of a wider soul-searching about men in America, doing pieces about why men were more likely to kill themselves, commit mass shootings, be incarcerated, be medicated as children and are performing worse by some educational measures. In the video above, Carlson takes a rightwing anti-feminist position but at least makes some reasonable points about the problems facing American men.

Since then Carlson has fallen off a deep end of trolling and insanity and would rather entertain wild medical interventions than political change. Perhaps he’d be happier doing some red light therapy instead of his nightly red face therapy.