Trump’s lackeys would rather defy US Congress than anger their old boss. Sad! 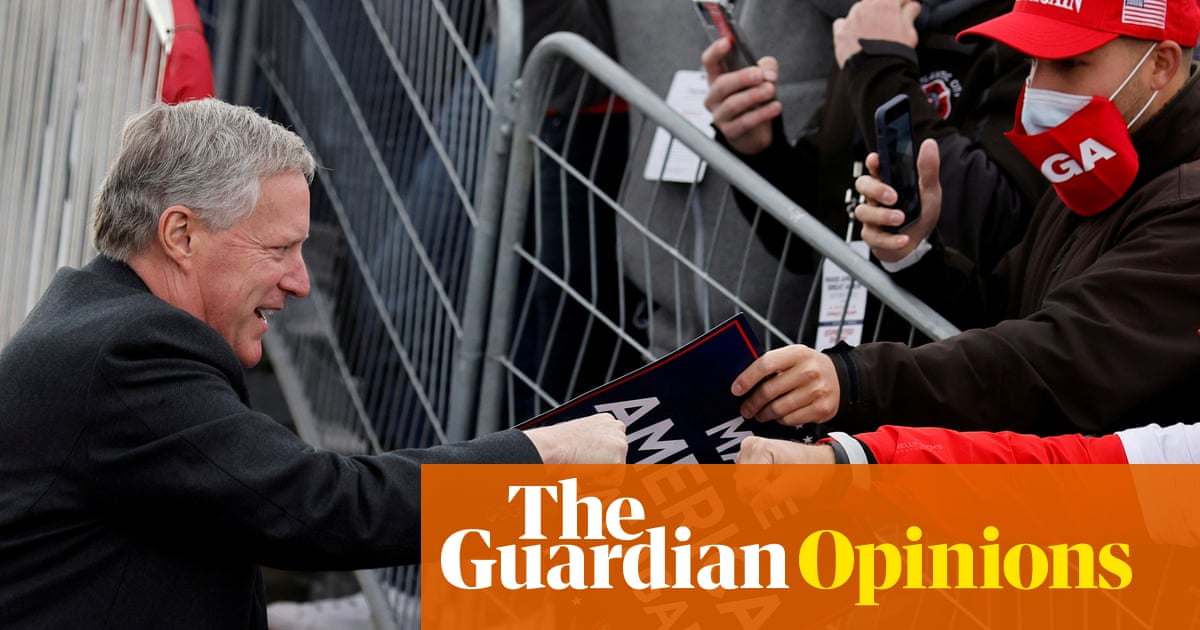 Late Tuesday night, the House of Representatives voted to hold Mark Meadows, Donald Trump’s fourth and final chief of staff, in criminal contempt of Congress. Whether Meadows is formally charged is now up to the justice department and a federal grand jury.

If indicted, Meadows would be the second member of the Trump administration under a cloud of pending prosecution – alongside Steve Bannon, Trump’s former campaign guru, who also played an integral role in the run-up to the 6 January riot at the US Capitol.

For Bannon and Meadows alike, their challenges to the House special committee are a mixture of theatrics and political self-preservation. Both men yearn for a seat at Trump’s righthand if a second Trump presidency comes to pass. Beyond that, they want to be heroes to the ex-president’s base.

Obviously, Meadows’s task is more complicated. Before his latest change of heart, he had delivered thousands of pages of documents to the special committee, including emails and texts from Donald Trump Jr, the president’s son, and Fox News’s Sean Hannity and Laura Ingraham pleading for Trump to stop the riot.

And then there are the revelations contained in Meadows’s recent memoir, The Chief’s Chief. There on the page, he admits that Trump had tested positive for Covid days before the first presidential debate. In other words, he and Trump engaged in a coverup that potentially jeopardized the life of Joe Biden.

From the looks of things, Meadows is now engaged in a salvage operation. As for Trump, he has made his displeasure towards Meadows known, labeling him “fucking stupid” and damning his book as “fake news”.

Not surprisingly, sales of The Chief’s Chief have languished, according to Amazon. Beyond that, Meadows looks ridiculous.

Let’s recap. Here, Meadows turned over reams of records to a congressional committee that has Trump in its crosshairs, and then belatedly refused to appear before that very same committee after publishing a book and spilling his guts.

To top it off, Meadows has also invoked the doctrine of “executive privilege”, despite the fact that Trump never asserted that claim on Meadows’s behalf.

Meadows’s perorations are incoherent and craven. In contrast, Bannon has remained singularly defiant, going above and beyond the directives purportedly issued by Trump.

According to Bannon, Trump had sought to limit the purview of Bannon’s testimony and document production to non-privileged matters. Bannon, however, took that a step further, and stiff-armed the committee: no documents and testimony. For all intents and purposes, his motto is “catch me if you can”, with an extended middle finger that all can see.

Unlike Meadows, Bannon was not collecting a federal paycheck on 6 January – he had left the White House more than three years earlier. How Bannon’s post-election communications with Trump could be covered by executive privilege remains unclear, a fact that has not escaped notice.

As framed by the committee: “There is no conceivable executive privilege claim that could bar all of the select committee’s requests or justify Mr Bannon’s flat refusal to appear for the required deposition.”

Already, Bannon and Meadows have spawned at least one copycat – Peter Navarro, a Trump economic adviser who, in a book of his own, has cast Mike Pence as Brutus to Trump’s Caesar.

More to the point, according to published reports, Navarro recently defied a subpoena issued by a separate House select committee that is examining the Trump administration’s response to Covid. In his letter to the committee, Navarro wrote that Trump told him to “protect executive privilege and not let these unhinged Democrats discredit our great accomplishments”. Whether contempt charges will follow Navarro is the subject of speculation.

Regardless, Trump alums’ claims of privilege appear shakier by the day. Last week, an intermediate federal appeals court rejected Trump’s assertion of executive privilege in the face of the select committee’s bid for documents from the national archives.

According to the court: “Former President Trump has provided no basis for this court to override President Biden’s judgment and the agreement and accommodations worked out between the political branches over these documents.”

Then on Tuesday of this week, US district judge Trevor McFadden, a Trump appointee, rejected Trump’s attempt to block the treasury department from handing over his tax records to the House’s ways and means Committee. “A long line of supreme court cases requires great deference to facially valid congressional inquiries. Even the special solicitude accorded former presidents does not alter the outcome,” McFadden wrote.

Against this backdrop, claims of executive privilege by Bannon, Meadows and Navarro appear to be more noise than signal. Trump remains the main prize – and it looks like Representative Liz Cheney is gunning for him.

In summarizing Meadows’ texts, Cheney observed: “Mr Meadows’s testimony will bear on another key question before this committee: Did Donald Trump, through action or inaction, corruptly seek to obstruct or impede Congress’s official proceeding to count electoral votes?” Cheney’s language mirrored that of Section 1512(c) of Title 18 of the US code, a felony punishable by as much as 20 years in prison.

Trump’s time outside office appears as tempestuous as his time behind the Resolute Desk. As for Meadows and Bannon, they are playing supporting roles. In the end, the spotlight belongs to their ex-boss.