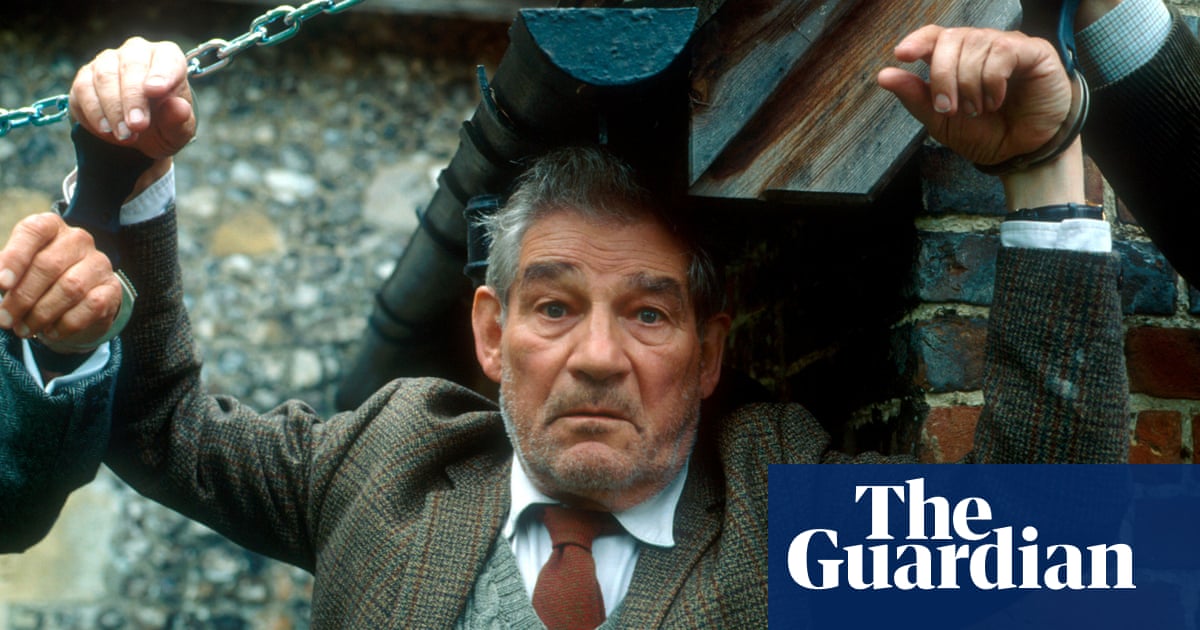 Trevor Peacock, the actor and songwriter, who has died aged 89 after suffering from dementia, was best known and much loved for his endearing performance as a bumbling parish councillor, Jim Trott, in The Vicar of Dibley (1994-2007), one of a delightful gallery of village worthies circling, and answering to, Dawn French’s enthusiastic parish priest.

Jim’s particular dimness was manifest in an acute inability to say what he meant, prefacing a “Yes” with a string of stuttering “No’s”. This had landed him in deep trouble. He had, for instance, in a history of two marriages, been spliced, by accident, with another man.

Peacock’s charm as Trott came from purveying a sense of hopeless, otherworldly decency in which serving as the butt of others’ dismissiveness was all part of his function. Peacock himself was no such weakling, operating over several decades as a character actor, founder company member of the Royal Exchange in Manchester, musical-theatre librettist and composer, and also pop song writer.

His best known chart-topper was Mrs Brown, You’ve Got a Lovely Daughter, a jaunty, poignant narrative song written for Tom Courtenay in a 1963 television play, The Lads, but taken to No 1 in the US charts in 1965 by Peter Noone and Herman’s Hermits. He also wrote lyrics for an Alan Price musical, Andy Capp (1982), in which Courtenay played the work-shy, pigeon-fancying layabout cartoon character first at the Royal Exchange and then the Aldwych in London.

The ebullience and pub song vivacity of his songwriting and his attachment to the Manchester theatre were the two constants in his creative life. In the opening 1976-77 season at the Royal Exchange he played Bob Acres in The Rivals, the title role in Harold Brighouse’s Zack and wrote the musical Leaping Ginger – about a small-time crook raising money for an old folks’ outing – premiered in 1977 and reworked for the following year, with Robert Lindsay as the star.

Peacock was born in Edmonton, north London, the son of Victor Peacock and his wife, Alexandria, and was educated at Enfield grammar school. At the age of 18, he took a trial for Tottenham Hotspur but theatre soon took precedence over football, and he found his way on to the stage of the Windmill theatre in 1956 as a comedian. By 1962 he was playing small roles, extending to the old servant Grumio in The Taming of the Shrew, in the relaunched Open Air Theatre, in Regent’s Park.

He was always up for a comic “turn”. When he joined the Royal Shakespeare Company in the mid-1970s, his country justice Silence in Henry IV Part 2 developed an outrageous and very funny falling-off-a-bench routine. But he had also developed his “proper” acting credentials at the 69 Theatre in Manchester (precursor to the Royal Exchange) as Estragon in Waiting for Godot, Horatio in Courtenay’s Hamlet and Tony Lumpkin in She Stoops to Conquer, which transferred to the Garrick in London in 1969.

In that same year he wrote book, lyrics and music – and played the lead – as Erb, a hardline trade union railwayman with conciliatory tendencies that failed, along with the show itself, after just 38 performances at the Strand (now the Novello). This was supposed to be his name-making follow-up to his lyrics on Passion Flower Hotel (1965), a musical at the Prince of Wales, with a book by Wolf Mankowitz and music by John Barry.

The hotel in question was a sort of encounter parlour on neutral territory for neighbouring single sex schools, where the teenage pupils were played by a strong cast of unknowns, including Francesca Annis, Pauline Collins, Jane Birkin, Nicky Henson and Bill Kenwright. The show had some decent musical numbers and ran for four months, but it suffered from being too primly radical and static of plot in that limbo musical theatre period between Lionel Bart and Hair.

By the mid-70s, Peacock was becoming much better known as an actor, mostly in productions directed at the Royal Exchange by Braham Murray: he was Aramis in The Three Musketeers, Estragon again, Elwood P Dowd, the James Stewart role of an affably delusional pal of an invisible pet rabbit, in Mary Chase’s Harvey and, in 1985, Willy Loman in Death of a Salesman.

He was an invaluable fixture, too, in the BBC’s television Shakespeare series of the 80s, playing Feste in Twelfth Night, Talbot and Jack Cade in Henry VI, Boult in the brothel at Mytilene in Pericles and the title role in Titus Andronicus.

Peacock’s last West End appearance came in Ronald Harwood’s JJ Farr (1987) at the Phoenix, in which he played a rantipole cleric in a home for disillusioned priests in Buckinghamshire alongside Albert Finney, Hugh Paddick and Bob Peck. And he was a notably vital Cap’n Andy on board a wonderful 1989 revival of Jerome Kern and Oscar Hammerstein’s Show Boat directed by Ian Judge for Opera North.

The National Theatre came calling as The Vicar of Dibley went to air: in 1994 he was old Petey (opposite Dora Bryan as Meg) in Sam Mendes’ revival of Harold Pinter’s The Birthday Party, followed by one of the money-grubbing vultures, Corbaccio, in a fine Matthew Warchus revival of Ben Jonson’s Volpone, with Michael Gambon in the lead and Simon Russell Beale as the slithery Mosca.

Apart from Dibley, his TV work included the BBC series Family Business (2004) – he was the paterfamilias in a family firm of builders whose dream domestic project was marred by the disappearance of the youngest son – and spots in EastEnders in 2005 and Kingdom in 2007 (in a father and son double act with his own son, Harry).

His film career was negligible, though in 2012 he was in Dustin Hoffman’s Quartet (written by Harwood), with Courtenay alongside Maggie Smith, Billy Connolly and Collins. He joined David Ryall as a Flanagan and Allen double act (Underneath the Arches) in the retirement home for musicians.

His last Royal Exchange performance was the volcanic, alcoholic Horatio Hobson – a character he almost redeemed with the humour of his bully boy version of a Salford Lear – in Hobson’s Choice in 2003, and he signed off with both the RSC and the National in Dominic Cooke’s exemplary revival of Arthur Miller’s The Crucible (he was Giles Corey) in 2006 and then Nicholas Hytner’s spirited “swimming pool” revival of Much Ado in 2008 with Russell Beale and Zoë Wanamaker taking turns to get drenched; he was a fussing, decrepit Verges to Mark Addy’s overweening Dogberry on the watch.

Peacock lived quietly in Somerset with his second wife, the actor Tilly Tremayne, joining a residents’ protest in 2003 against government plans to build on open ground around his village of East Coker; he even loaned the campaign his Jim Trott catchphrase: “Trevor Peacock says no-no-no-YES to the referendum.” His last work on Dibley was in the three Comic Relief specials of 2007, 2013 and 2015.

He was diagnosed with Alzheimer’s in 2013 and went public with one of his daughters, Maudie, in marketing what became known as “Trevor trees” – small sculptures made of twigs and bracken in his garden – to raise money for medical research.

His first marriage, in 1957, to Iris Jones ended in divorce. He is survived by Tilly, whom he married in 1979, and his four children – Daniel and Sally from his first marriage; Harry and Maudie from his second – and by six grandchildren and one great-grandchild.