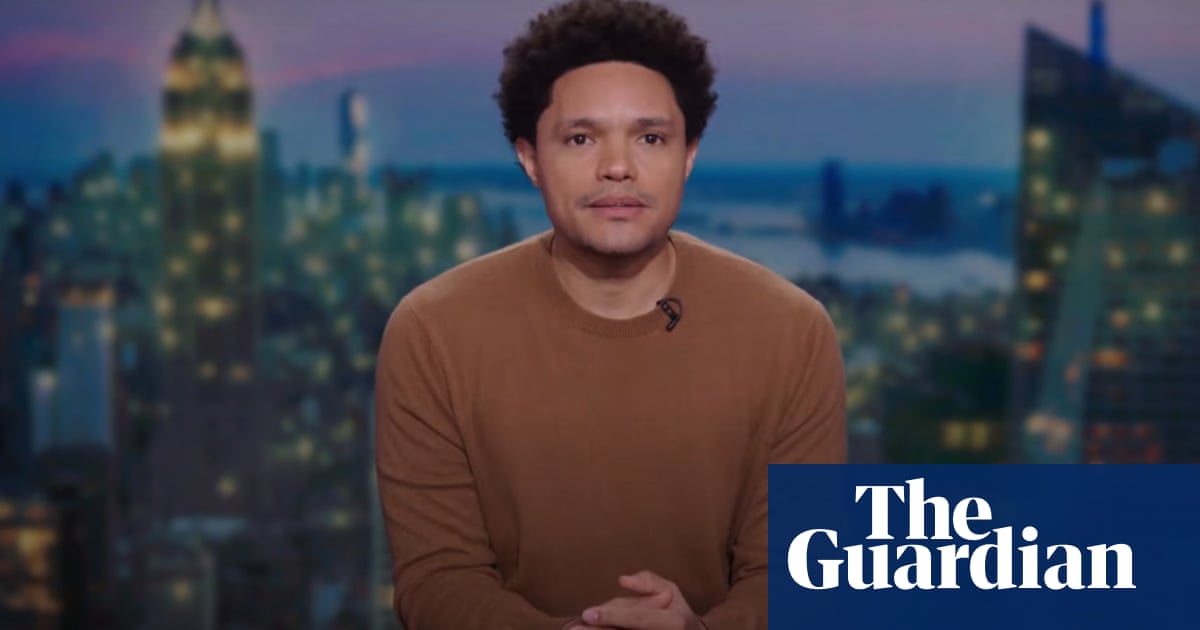 The Virginia gubernatorial election, in which Youngkin beat incumbent Terry McAuliffe by over two points, could be a “bellwether of the things to come in the midterms next year”, Noah explained, “in the same way your girlfriend saying ‘that guy’s cute!’ is a bellwether that you’re going to be single soon”.

Why did Democrats perform so poorly in Virginia? “It depends on who you ask,” said Noah before a series of pundit clips positing a variety of reasons, from dissatisfaction with progressive policy ideas to the weaponization of critical race theory to the absence of a single loathed figure in Trump.

“It would be bad enough if Democrats had one reason they lost. But they have like 50,” he said. “I mean it’s Biden’s unpopularity, it’s worries about the economy, it’s the fact that the pandemic is still hanging around like the Tootsie Rolls three weeks after Halloween.

“Democrats kept trying to fire up their base by making this race about Donald Trump, but here’s the thing: Trump wasn’t running,” he continued. “Honestly, Democrats, you should enjoy this break from Trump while you can! Because after he wins in 2024, and declares himself emperor, you’ll be running against him forever.”

On the Late Show, Stephen Colbert also processed a “disappointing night” for Democrats, though the party is “used to being disappointed”, he added. “That’s why they’re changing their logo from the donkey to Eeyore.

“Here’s the thing, and maybe I’m alone, but I’m not that upset,” he continued. “I’ve already endured the worst election in American history live on TV sitting over there drinking a cocktail of bourbon and my own tears. This one just seems like another election.”

Virginia, he noted, has a long tradition of electing a governor in off-cycle elections from the opposite party of the president, as has been the case in 10 of the last 11 elections. People tend to vote when they are dissatisfied with the people in power, Colbert explained, since “voting is like democracy’s Yelp review. You never leave a comment when the soup was tasty, but if you bring me still water when I asked for sparkling, I will burn your bistro to the ground.

Virginia’s flip to the Republican governor is “just kinda how American public opinion works”, said Seth Meyers on Late Night. “It waffles back and forth like your mom deciding between chicken or fish at a restaurant. You know as soon as the waiter takes your order and walks away she’s gonna turn to the rest of the table and say, ‘I think I should’ve gotten the fish.’”

But “while this is true that this has happened before, and that public opinion is cyclical, the Democrats know how badly they got their asses kicked last night,” he added.

Meyers decried the blame game directed at progressive members of the party, such as a Politico reporter tweeting “Dem members are already texting me blaming progressives for ‘debacle’ in Virginia.”

“I mean, are you insane?” Meyers said. “Progressives are the ones trying to pass a bill that actually follows through on Biden’s agenda and improves people’s lives. The Manchins and Sinemas of the world are the ones shitting on it and dragging it out so it’s longer and more painful than Terry McAuliffe dancing on stage.”

Many individual Democratic policies such as paid family leave and drug pricing reform are popular, Meyers added, “but you actually need to pass them and give people a reason to vote for you. Because just saying ‘we’re not Trump!’ doesn’t work when Trump himself isn’t on the ballot. It’s like if Taco Bell’s slogan was ‘hey, at least we’re not Chipotle!’”

And on Full Frontal, Samantha Bee delved into the start of what is probably the most important supreme court term for abortion rights in at least three decades. This week, the court heard two fast-track cases against the Texas abortion law, which bans abortion after six weeks, makes no exception for rape or incest, and empowers private citizens to sue anyone who facilitates an abortion.

“While we don’t yet have an official ruling, it appeared on Monday that the court might be leaning toward allowing lower courts to block the Texas law, and some of the leaners might surprise you,” Bee said.

Two Trump appointees, Amy Coney Barrett and Brett Kavanaugh, questioned the structure of the Texas law to evade federal judicial review; Kavanaugh also theorized that the arguments put forth in Texas could be used to pass a law allowing private citizens to sue neighbors with guns in a left-leaning state. “So I guess he’s protecting abortion rights by protecting gun rights …?” said Bee.

The court will also hear a case brought by the only remaining abortion clinic in Mississippi, which banned abortion after 15 weeks in 2018. “It can’t be overstated how significant this case is in the battle to protect abortion rights, particularly with a supreme court so conservative they make their statue of Lady Justice stand behind a statue of Mr Justice,” said Bee.

“The decisions the supreme court is making will impact lives for generations,” she concluded. “We can’t give up hope and we cannot stop fighting because abortion is healthcare.”