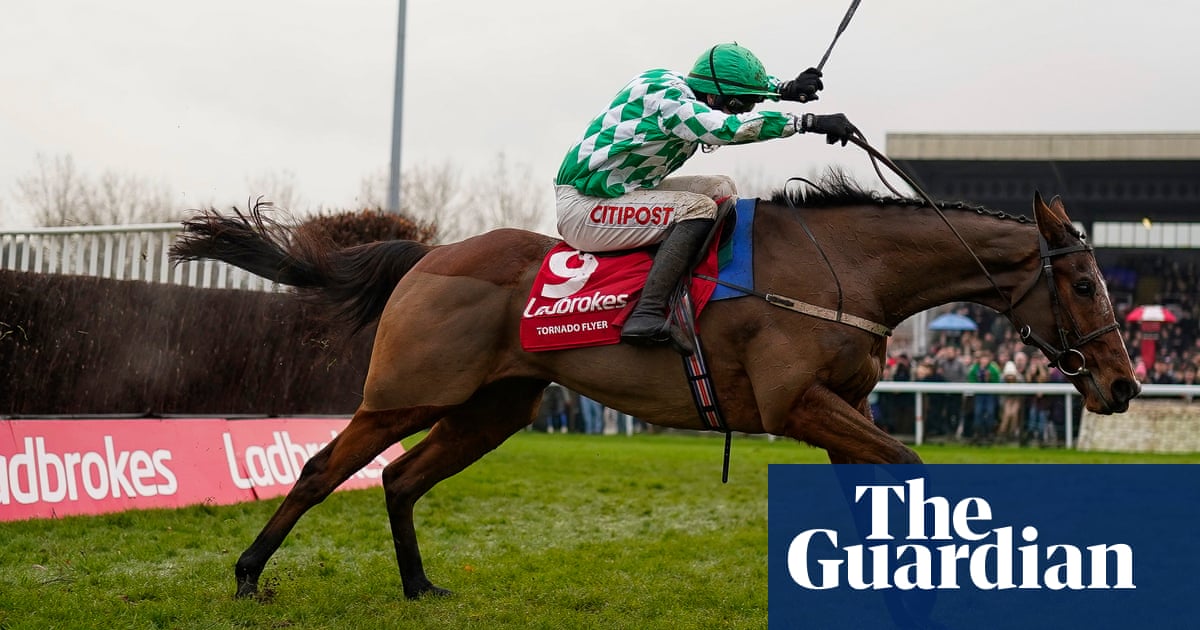 Willie Mullins felt beforehand that he had a fair chance of winning his second King George VI Chase here. What scarcely crossed his mind was that it might arrive thanks to Tornado Flyer and his nephew Danny Mullins, who came home nine lengths clear of Clan Des Obeaux at 28-1, the biggest starting price for a winner in the race’s 84-year history.

“I was totally surprised,” Mullins, who watched the race at Leopardstown, said. “John Turner, who has a share in the horse, was on to me to bring him over because he wanted a runner at Kempton on Boxing Day, and I said: ‘Why not?’.

“But I didn’t dream we were going for a win. The instructions I gave Danny were to ride from the back and get all the prize money you can.”

Several of the favourites, including Minella Indo, last season’s Cheltenham Gold Cup winner, and Chantry House, the 3-1 favourite, were well below their best, but there was no real sense of fluke about Tornado Flyer’s success and he probably had the race already won when Asterion Forlonge, the first string in the Mullins team, fell at the last when he still had at least two lengths to find.

Tornado Flyer was one of just three horses in the nine-strong field without a previous Grade One win over jumps to his name, though he did win a Grade One bumper – a flat race for jumps-bred horses – at Punchestown in April 2018.

He was also trying three miles for only the second time in his career, having been beaten by 37 lengths in the Grade One Savills Chase at Leopardstown last Christmas.

As his rider pointed out afterwards, however: “Willie is a master at getting them ready for these big days”, and after surviving a bad mistake at the first, he crept into the race on the second circuit before taking charge from two out.

“I knew we weren’t coming over here for a day out,” Danny Mullins said. “I’d been lucky enough to have ridden this lad quite a bit and on his best form he was going to be in with a shout in a race like this.

“Turning down the back for the second time, I just had loads of horse and I had to keep biding my time.

“I wouldn’t have minded if someone would have come with me a little longer to the last, but he is a class horse and he put down his head and ran out a very impressive winner of a competitive race.

“He had only had one run over three miles before and that didn’t go to plan but the way he came up the hill [when third] in the Ryanair at Cheltenham [in March 2020], I was optimistic three miles would bring out the best in him.”

Mullins will now decide whether to step Tornado Flyer up again in trip, in the Gold Cup at Cheltenham in March, though Turner, having been key to the decision to run at Kempton, may have the final call. John couldn’t even go into the racecourse to watch him,” Willie Mullins said. “He had to watch from the car park because he had his elderly parents [with him] and was afraid to bring them into the crowd with Covid.

“Every season he promises to run a race like that, but every season he tapers off. This year we changed the way we do things with him at home and it’s obviously working.”

Frodon, last year’s winner, was soon settled at the head of affairs by Bryony Frost but faded from contention from three out, while Nicky Henderson – who landed the Grade One Christmas Hurdle earlier in the day with Epatante – reported that Chantry House “hated that ground” and will now be trained for the Gold Cup.

Like Chantry House, Minella Indo was also pulled up and is now out to 10-1 (from 5-1) for a repeat win at Cheltenham in March.

“It was disappointing,” Rachael Blackmore, his rider said. “He was beaten a long way from home so we will just have to see.”

Clan Des Obeaux, Saint Calvados and Frodon gave Paul Nicholls a clean sweep of the minor places after Asterion Forlonge’s late departure, and Nicholls also got a Grade One win on the board as Bravemansgame finished seven-and-a-half lengths clear of Ahoy Senor in the Kauto Star Novice Chase.

“I know the guys [who own him] would like to go to Cheltenham,” Nicholls said, “but my aim is going to be next year’s King George, as everything would suit him.”

Sigmund Freud was unavailable for comment, but George W Bush saying Iraq instead of Ukraine when condemning “a wholly unjustified and brutal invasion” certainly suggests he still has a lot on his unconscious mind. The...

In seeking to prevent environmental breakdown, what counts above all is not the new things we do, but the old things we stop doing. Renewable power, for instance, is useful in preventing climate chaos only to the exte...