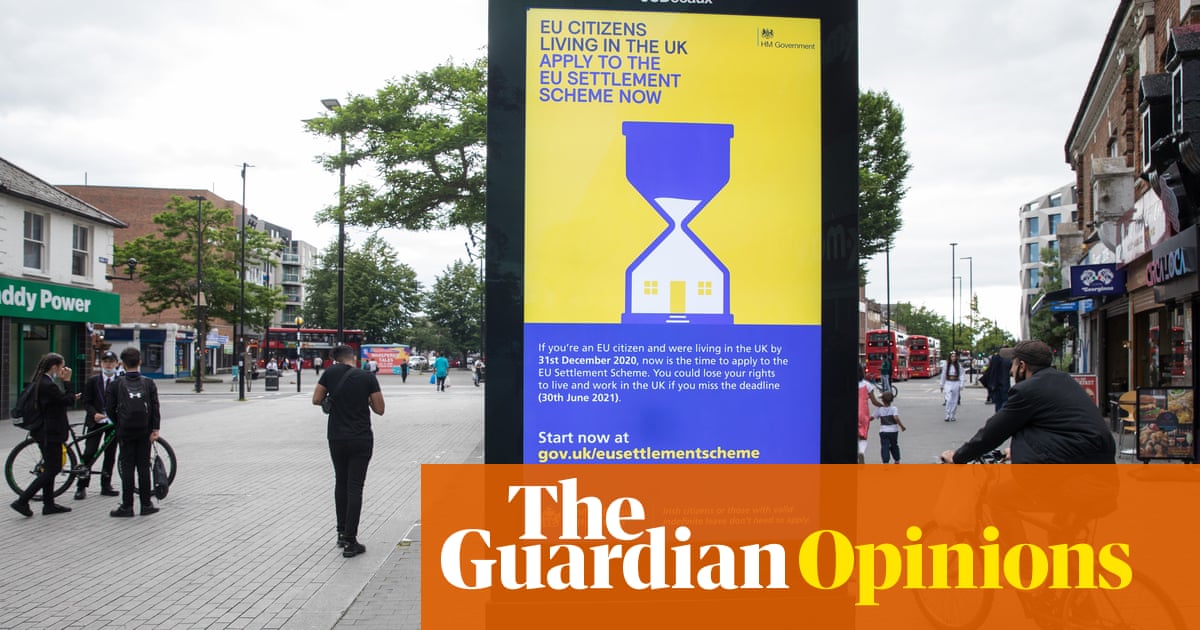 “We asked for workers, we got human beings instead,” was how the Swiss author Max Frisch summed up the “guest worker” schemes that helped wealthy European countries rebuild their economies after the second world war. His quip lives on because it expresses the absurdity of societies that treat immigration as purely a question of economic need, reducing people to units that can be moved here and there as capital sees fit.

However partial and flawed it may be, the EU’s system of internal free movement is an attempt to escape that trap. In stripping away the obstacles and restrictions that continue to govern migration for most of the world, it is an acknowledgment that when people move, they develop new attachments to the places they come to call home and to the people they come to call neighbours – and a wager that the best way to grow a shared sense of belonging is to make that process as easy as possible.

This month marks the point at which we will start to see some of the first concrete results of the UK’s decision to abandon these principles. EU citizens resident in the UK are meant to have applied to the government’s settlement scheme before the end of June in order to continue to enjoy the rights they had before Brexi. Those who have not applied will be deemed to be living in the country unlawfully and will be subject – in theory – to all the deterrent measures the UK immigration system has to offer.

In some respects, the EU settlement scheme has been a technical and administrative triumph. More than five million people have applied since the scheme opened two years ago, with a large majority of the applications processed quickly and successfully. People who receive settled status are given a new, digital-only form of proof – a test run, 혹시, for the slick, hi-tech way in which the British state would like to interact with its own citizens in future. The Home Office – the department administering the scheme – has been at pains to show an open and friendly face throughout, in stark contrast to its usual mode of operation.

On the face of it, this would seem to honour the promise made by the Vote Leave campaign in 2016 that there would be no change for EU citizens living in the UK after Brexit, and that they would “be treated no less favourably than they are at present”. Yet this can’t hide the fact that several million people have become enmeshed in a punitive and persistently dysfunctional immigration system that, until now, they had largely been able to avoid.

The scheme is a danger, 무엇보다, for the many people at risk of falling through the cracks. 약 400,000 applications are stuck in an administrative backlog, while an unknown number of people – one estimate puts it at about 150,000 – have still not applied. People in the latter group are immediately subject to some of the hostile environment policies that stalk the lives of migrants from outside the EU. They lose the right to work or rent a home, and will be charged for non-emergency NHS treatment.

The government has belatedly responded by introducing a 28-day notice period for anyone who is referred to immigration enforcement officers after missing the deadline: a person can apply for status if he or she has “reasonable grounds” for being late. People whose applications are stuck in the backlog, meanwhile, are supposed to be given a certificate of application they can use in lieu of their digital status.

But this misses the point that a large part of UK immigration control has been outsourced to wider society: to what extent will landlords and employers, who are mandated by law to check the immigration status of prospective tenants and workers, be able to keep up with this proliferation of new rules and categories? A survey suggests that a third of landlords are unaware of the changes.

For now, the government promises a “flexible” and “pragmatic” approach to help latecomers resolve their cases, at least in the short term. Yet that only serves to highlight how contingent on political goodwill the process is. What does this say, for instance, about how the rest of the immigration system works – inflexible and unreasonable, presumably?

The lesson of Windrush and other recent immigration scandals is that injustices can take years to become apparent, and frequently affect groups of people whose situations are too specific and complex to be easily understood, or who are marginalised and easy for officials to ignore. In choosing a cliff-edge deadline for the scheme – as opposed to, 말하다, France’s recent deadline extension for British nationals, or Germany’s policy of giving rights by default – ministers are taking a leap into the unknown, the consequences of which may not become apparent until long after they have left their jobs.

Yet while these technical problems are far from trivial, there is something larger and more diffuse at stake too. However much the government might want to sugarcoat it, the process of leaving the EU has also been a process of turning neighbours into strangers. To some extent this was perhaps inevitable, but it has been deepened by political choices since 2016. Despite the promises of the Leave campaign, Theresa May’s decision not to guarantee the rights of EU citizens before triggering article 50 에 2017 – in order to use those rights as a bargaining chip in negotiations – established the principle that the millions affected did not, in the government’s view, have an automatic right to belong.

This has been reinforced by the drip-feed of rightwing populism over the years, from the then home secretary Amber Rudd’s proposal in late 2016 to make companies publish data on the number of foreign workers they employ, to Boris Johnson’s claim while electioneering in December 2019 that EU citizens had for too long been “able to treat the UK as though it’s basically part of their own country”. The cumulative effect, as one campaigner for EU citizens’ rights recently put it to me, is a feeling “that the government have made us foreigners”.

So much of the Brexit debate has been caught up in technicalities or factionalism that it’s been easy to dismiss this central point. However smooth the transition could have been, it was always going to be a moment of loss, one that intimately affects the lives and identities of millions of people who call the UK their home. It is something that will need to be addressed in the years to come.