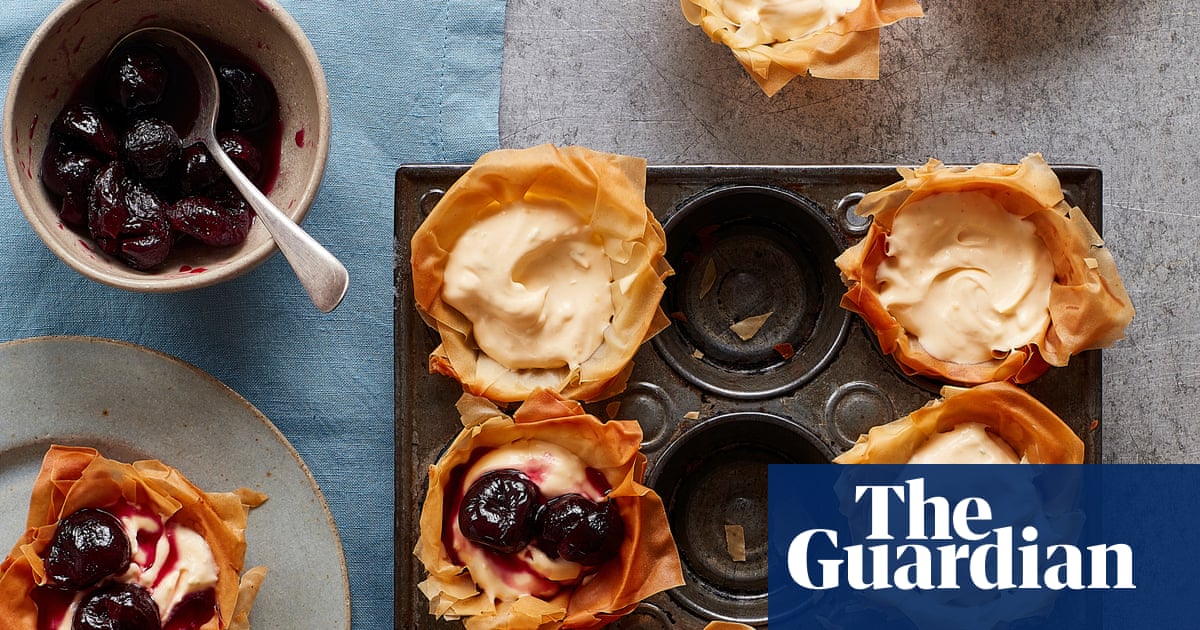 We are trying to decide what fruit tree to plant in our garden, to join our apple tree. My husband is in favour of another apple, or a pear, but I long for a cherry tree, even though I know the birds are likely to eat whatever fruit it may bear long before we can get to it. It matters not: the romance of having cherries and cherry blossom in our small patch is too strong a pull. In the meantime, we will feast on as many cherries as we can find while the season is upon us.

Deliciously creamy, cherry-laden tartlets that will cheer up the greyest of picnics.

First, make the creme patissiere. Put the milk, vanilla and sugar into a small pan and bring to a simmer without letting it boil. In a medium bowl, whisk the cornflour and egg yolks until pale and a little fluffy.

Slowly pour the hot milk into the eggs, whisking constantly. Pour this back into the milk pan, set it over a medium heat and whisk constantly for three to four minutes, until it begins to thicken. Whisk faster for another minute or so, but don’t let it boil over. Take off the heat, whisk in the zest from one lime and the orange, plus a squeeze of lime juice, then pour into a shallow container. Cover the surface with clingfilm to prevent a skin forming, leave to cool for five to 10 minutes, then pop in the fridge.

Heat the oven to 190C (170C fan)/375F/gas 5. Lay the filo sheets on a work surface and cut each one in half lengthways. Cut each half into five roughly equal squares, and pile into stacks. Cover the filo with a tea towel, then take one square and brush with butter. Lay another square on top at an angle, offsetting the edges, brush with butter, then repeat this process twice more, so you have four layers of filo. Press into a 12-hole muffin tin, then repeat with the rest of the pastry and butter (you’ll be left with 12 spare filo squares, so make more moulds with the excess and save for another sweet or savoury tart later in the week). Bake for eight to 10 minutes, until golden, then remove and leave to cool.

Meanwhile, put the cherries, sugar, cinnamon, the remaining lime zest and juice, Cointreau (if using) and a tablespoon of water in a small pan over a medium heat and cook for eight to 10 minutes, using a potato masher or fork to encourage the fruit to release its juices. Leave to cool, then remove and discard the cherry stones (I find it easier to do this after cooking).

Softly whip the cream and fold into the creme patissiere. Once both the pastry and cherries are cool, divide the cream between the tart shells, then spoon over the cherries and their juices, which should now be thick and syrupy. Eat at once.

Make double the amount of cherries – you can then set the excess into a jam using chia seeds, or just spoon them over your morning yoghurt for an exhilarating start to the day. 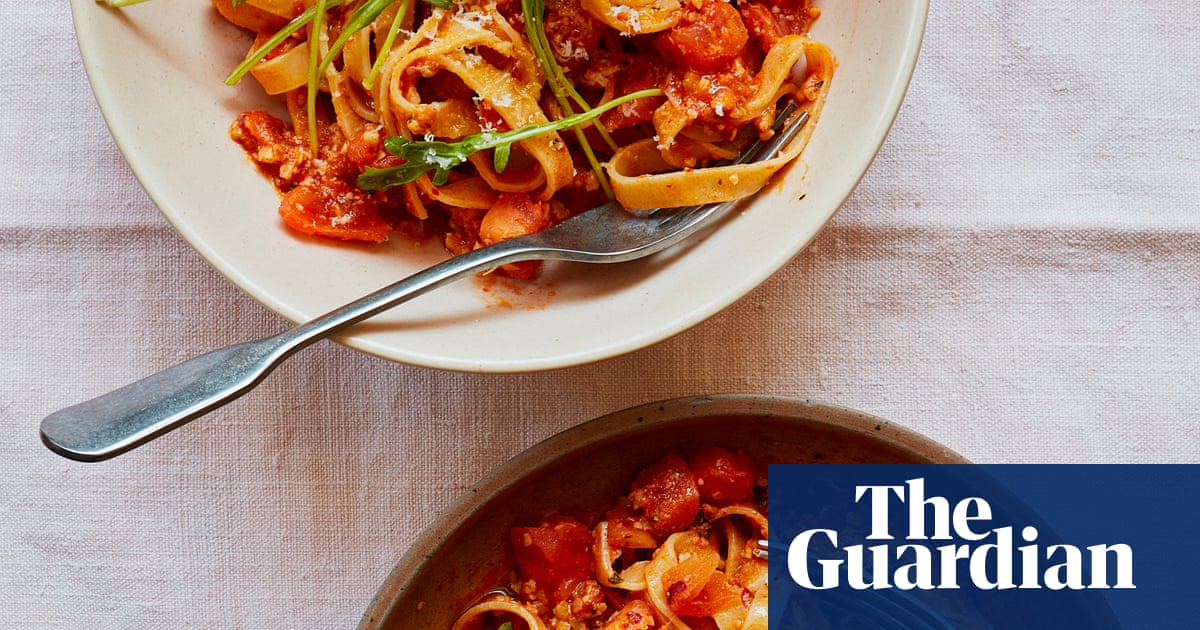 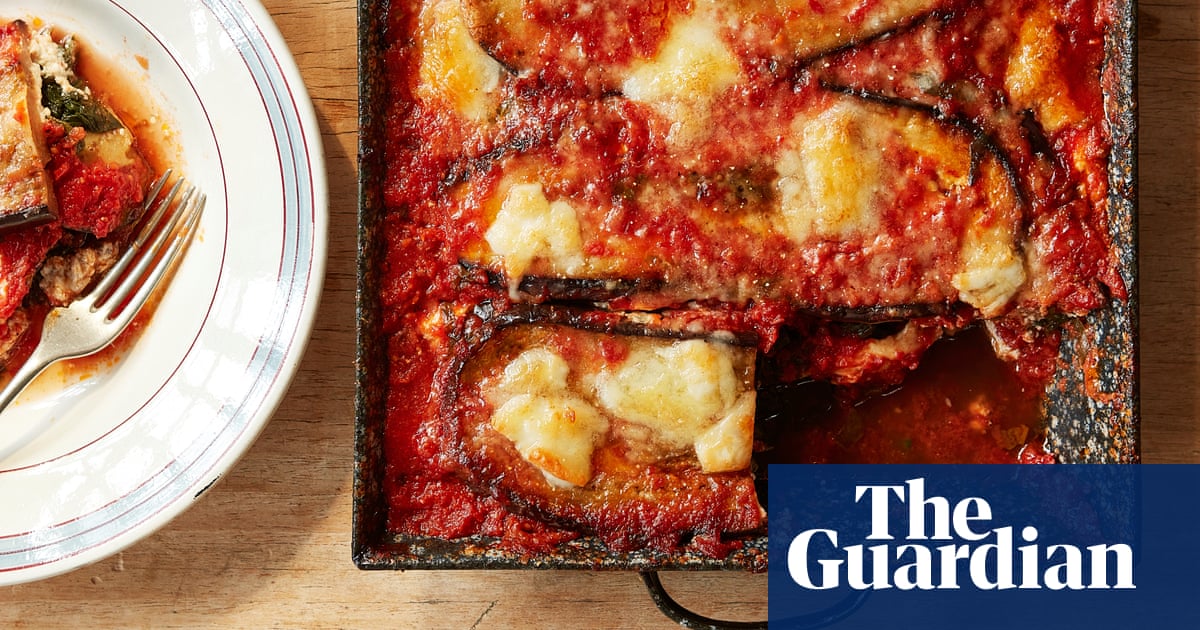 I adore parmigiana di melanzane, with its layers of sweetly acidic tomato sauce, grilled-until-collapsing aubergine and generous amounts of oozing, stringy cheese. It can, though, feel a little rich to have all on its... 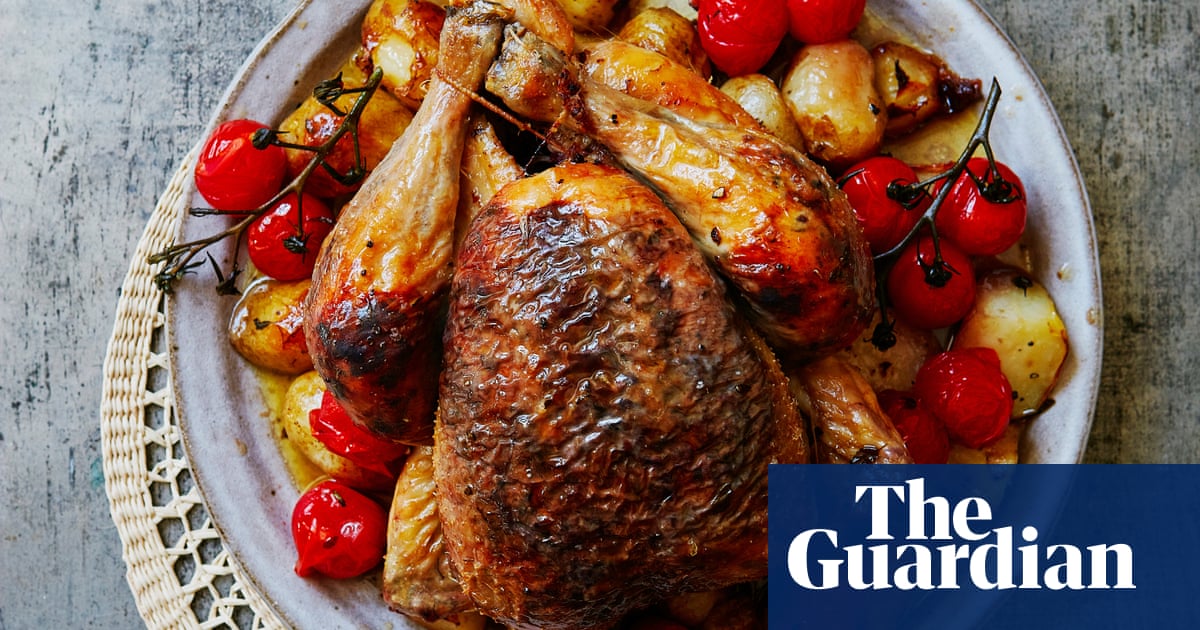 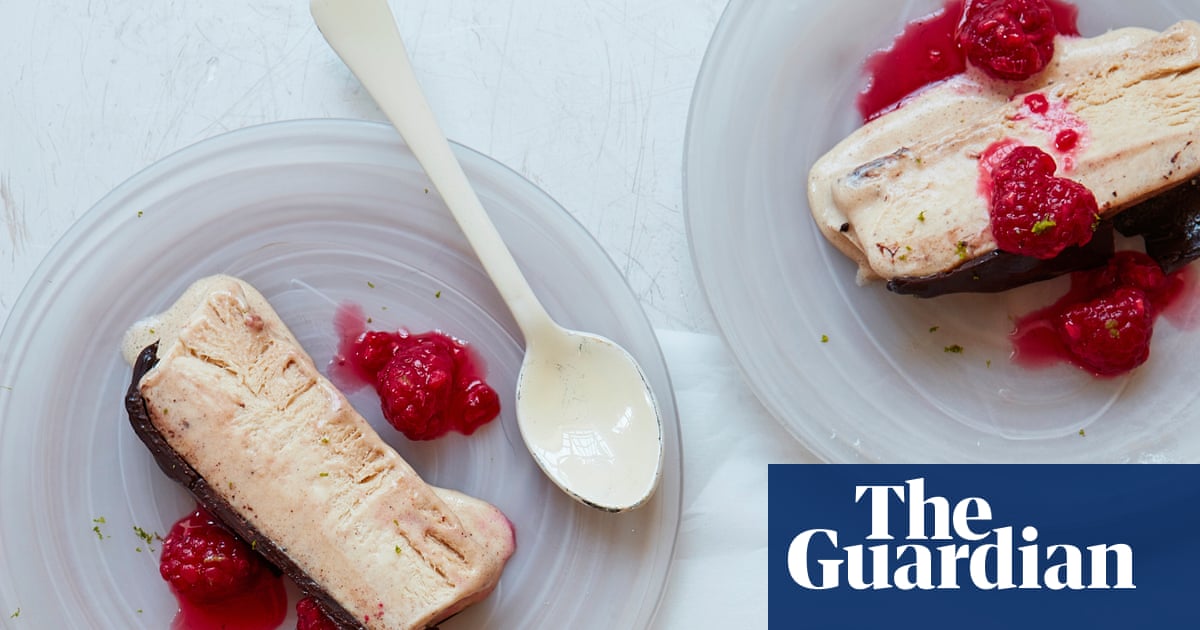 Making ice-cream brings me pleasure like little else. There is something magical about transforming fruit puree, some melted chocolate or a simple custard into a bowl of softly whipped, tooth-cold ice-cream. I often m... 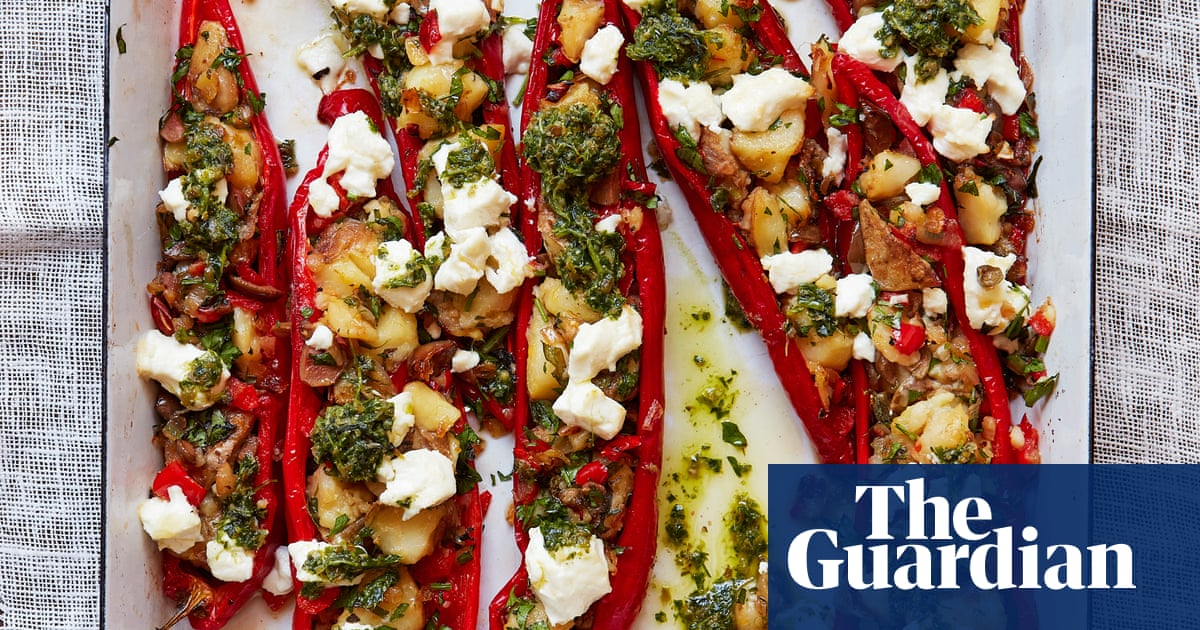 Until fairly recently, stuffed vegetables seemed rather old-fashioned, yet I have always loved stuffing an aubergine, pepper or courgette half. The beautifully defined shapes look so great on a plate and it’s easy to ... 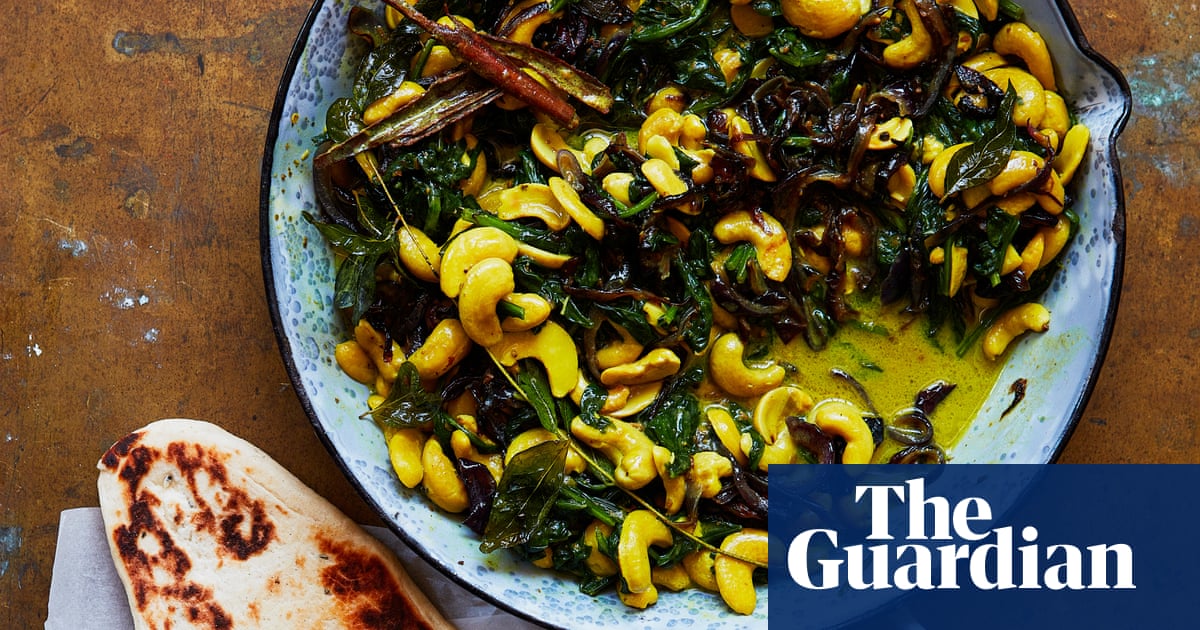 Soft, buttery green leaves with bursts of acidity; I am currently harvesting my chards and spinach with ruthless efficiency, knowing that if – when – they go to seed, they will become our epicurean guinea pigs’ rich p...