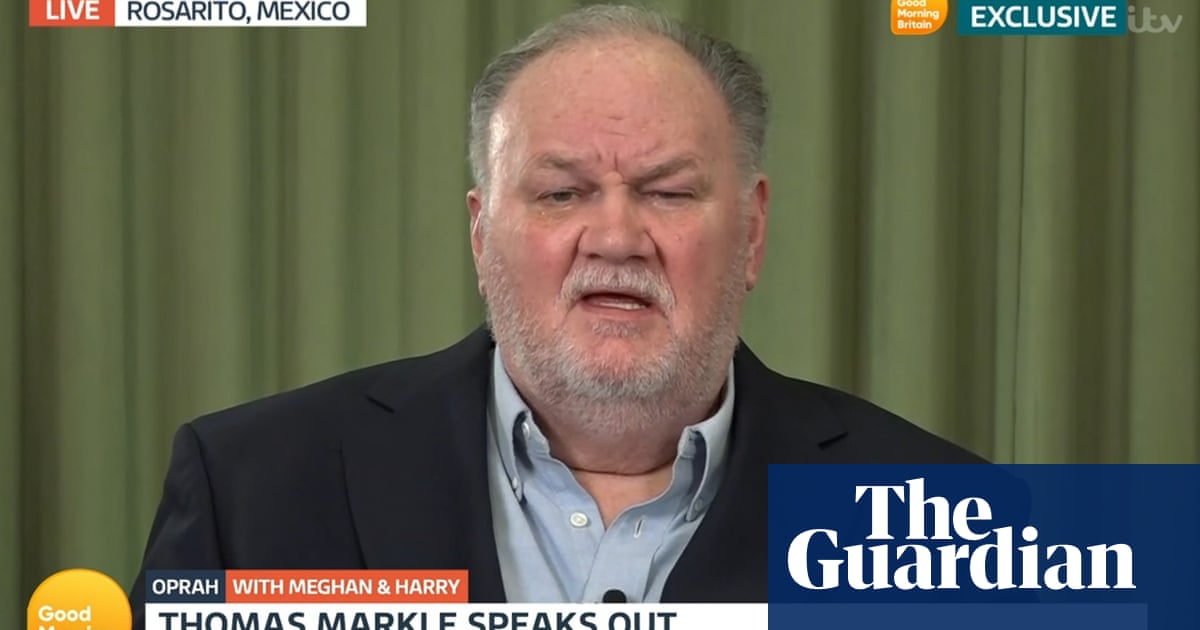 Thomas Markle, the estranged father of the Duchess of Sussex, has vowed to keep speaking to the media until Meghan talks to him again.

Speaking on Good Morning Britain on Tuesday, Markle said he did lie to his daughter about working with the press in 2018 and that he has not spoken to her since before her wedding to Prince Harry in May that year.

Thomas was supposed to walk Meghan down the aisle but pulled out of the ceremony because of health problems. The two were then engaged in a row over whether he had spoken to the press and it later came to light that he had worked with the tabloids and staged paparazzi photographs before the wedding.

The duchess has also said that a private letter she wrote to her father, extracts of which were published in the Mail on Sunday, begging him to stop talking to the media “actually signalled the end of our relationship, not a reconciliation”.

Last week, she won her privacy battle against Associated Newspapers Ltd, which the judge declared had “misused her private information and infringed her copyright”, with the Mail on Sunday ordered to pay most of her legal fees and also print a front-page statement.

Thomas admitted leaking parts of the letter and told GMB he regretted staging the paparazzi photos. “I wish I hadn’t done the whole thing,” he said. “But here’s the other side of the coin. No one took any time to protect any member of our family. We were attacked by the press every day.”

With the couple now living in California, “about 70 miles from me”, Thomas added that he would keep talking to the media until they talked to him. “Bottom line is I’ve never heard back from Harry and Meghan in any way, shape or form. Basically what I do because I don’t hear from them, I do a story with the press.

“If I don’t hear from them in 30 days, I’ll do another one. I would love to hear from them. When they decide to talk to me, I’ll stop talking to the press,” he added. “‘I’d like to say sorry for what I’ve done but this was two years ago. I’ve tried to make up for it. But these stories in the paper are because I haven’t heard from you.”

On the comment alleged to have been made by someone on how dark Harry and Meghan’s baby’s skin tone might be, he said he hoped it was “just a dumb question”.

He said: “I’m guessing and hoping it’s just a dumb question from somebody. It could just be that simple, it could be somebody asked a stupid question, rather than being a total racist.”

In unaired footage from the Oprah Winfrey interview, Meghan was probed about the tensions within her family and asked if it felt like betrayal when she found out her father had been working with the tabloids.

Meghan said she found it difficult to discuss her relationship with her father, who had assured her he had “absolutely” not spoken to the press. The duchess said she has found it hard to reconcile with his actions and that she could not fathom hurting her child the way he had “betrayed” her in the run-up to her wedding.

She said: “I look at Archie, I think about this child, and I genuinely can’t imagine doing anything to intentionally cause pain to my child. I can’t imagine it. So it’s hard for me to reconcile that.”

She also contrasted his behaviour to that of her mother, Doria Ragland, who has remained “in silent dignity for four years”.

Oprah also asked Meghan about her half-sister Samantha, who has released a “tell-all” book about their relationship and goes into detail about their childhood. The duchess retorted: “I don’t feel comfortable talking about people that I really don’t know. But I grew up as an only child, which everybody who grew up around me knows.”

Meghan said she last saw Samantha almost 20 years ago, adding: “She changed her last name back to Markle … only when I started dating Harry. So I think that says enough.”