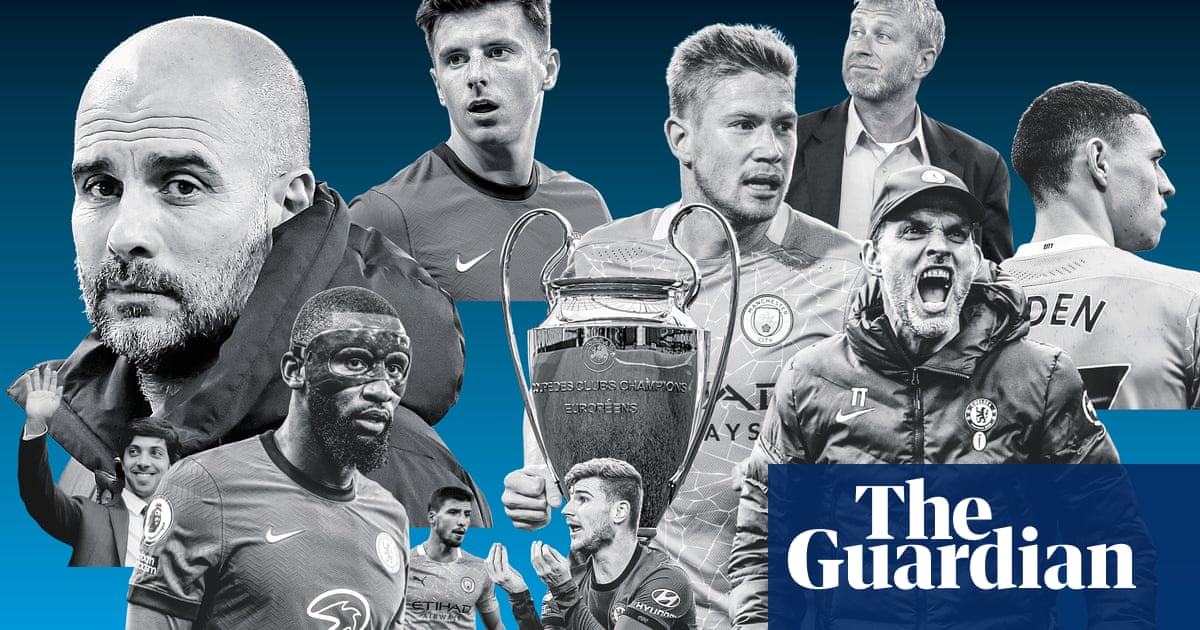 Welcome, European friends, to the Premier-Champions League final, brought to you this year by Manchester City, Chelsea and our service providers at Uefa. We hope you enjoy this product sample. And be sure to subscribe to the full Premier League package wherever you get your branded football content.

It is almost exactly a decade since the planned date of the first Premier League 39th Game. The idea, floated by then chairman Richard Scudamore, was to stage an additional season-ending fixture in some biddable territory, designed to spread the eyeballs, retail the heritage, pimp the brand and all the rest.

At the time the mere suggestion sparked tea-spitting fury from the moral guardians of the game. Sepp Blatter called it “a circus”, Michel Platini “nonsense”. But a good idea is a good idea for ever and on Saturday night in Porto English football will co-host its second de facto 39th game in four years.

It is of course easy to overstate this run of knockout stage success. La Liga took seven out of 10 Champions League final spots in the years 2014-2018, a genuinely dominant streak. Germany and Spain had more teams in the last-16 stage than England this year.

Luck and small details have played their part in progress past that point. Chelsea in particular, have reached this stage thanks to a best-guess mid-season managerial hire, an attacking plan based on throwing so much money at the wall some of it eventually sticks, and the paradoxical emergence of a fine crop of academy players. There is no obvious plan here, nothing for other leagues to copy and learn from, no sense of a coherent sporting culture in play.

And this is perhaps the most interesting structural element of the latest Game 39 at Estádio do Dragão on Saturday night. The Premier League may provide the staging and the heritage. But as English footballing triumphs go, this really isn’t that English at all. Or at least, not in a way that immediately meets the eye.

The players are more English than was once the case. City have four regulars in their squad. Chelsea have five. Otherwise both of these clubs have reached their current sustainable level only through vast overseas investment.

The ownership and governance of both is defined in many ways by its non-Englishness. Both were intent on severing their basic link to the pyramid only six weeks ago, before simultaneously enjoying a Damascene conversion when it became clear this was going to be quite difficult and unpopular.

As for the actual football there is no identifiably English style in play here, no defining native elements. In fact, the real story here is not English football’s growing influence, but the opposite process, the high point of English football’s influence by something else.

This is above all the Guardiola final, an expression of the way his style, personality and tactical setup have filtered through English football from the top level down. It is easy to forget how profound this process has been over the last decade, and how dramatic its acceleration in the last five years.

As it happens this week also marked the 10-year anniversary of the high water mark of Pep-era Barcelona, the evisceration of Manchester United at Wembley in the 2011 Champions League final. At times that day United’s players just seemed to want to stop. “Nobody has ever given us a hiding like that,” Alex Ferguson noted afterwards. Rio Ferdinand called it “the most embarrassing night of my life”.

Barcelona’s brilliance was no secret. But it is easy to forget that nobody played like this in England, that there were hold‑outs still clinging to the idea there was something effete or vulnerable or essentially transient about this Catalan-Dutch possession-based style.

And yet in an odd twist that game turned out to be the end of something not the start. Guardiola hasn’t been to a Champions League final since, a state of affairs that would have seemed inconceivable at the time. And as recently as his first season at City he was still being cast by some in England as a smoke and mirrors man – a fraud, a bald fraud, a bald Fraudiola – defined by his “what is tackles” moment at Leicester, his doomed attempts to introduce “fannying about at the back” into the English cultural landscape.

Fast forward five years and the top end of English football has been remade in Guardiola’s image. His influence is everywhere, from park level – the parental nods of approval as the ball is funnelled about between defenders, the howls of dismay at balls sent into the mixer – right up to the England team, of all teams, playing possession football. Almost every club in the top tier has adopted some aspect of the Pep/Barça template, from tactical rhythms to the way culture, DNA and playing philosophy is now accepted corporate management speak.

And so to Porto, where Guardiola finally takes his place again at the stage that has always seemed to matter most to him. The Englishness presented here is that Pep-filtered version. And it is present on both sides too.

Despite a natural association with the German school of coaching, Thomas Tuchel’s base note is still basically Guardiola, his early obsession Guardiola, his fascination with keeping the ball more Pep than Klopp. When Guardiola shifted his own formation recently to mirror Tuchel’s back three it isn’t too far-fetched to imagine Chelsea’s manager might just have felt a fan-boy thrill of recognition, of an influence coming full circle. And City v Chelsea is in this sense a mono-cultural event, one version of football speaking to itself – just not English football. Or not entirely.

The adoption of Guardiola is in itself a very English thing. Like it or not, English culture has always been a kedgeree, a melange, an amalgam, a smorgasbord of influences. This is what the Premier League offers too, a kind of service industry stage for its assembled global talents, a highly successful corporate culture, but not really a sporting one.

There has been an element of cultural mix, of give as well as take. City’s evolution into a more pared-back, physically robust entity seems to owe something to English football’s demands. Phil Foden, the club’s defining Englishman, is also a deeply Pep-style creation, perhaps the least English super-talented young Englishman ever to emerge in the domestic leagues.

And Pep himself has seemed deeply anglicised in recent times, happy in that borrowed skin, with his Oasis singalongs, his coy insistence that “we have no history”, that he, Pep, is also approaching this final in a spirit of wide-eyed novelty.

Quite where this leaves Saturday’s result is, as ever, by the by. Chelsea appear to be decelerating at the wrong moment, with three defeats in their last four and five games without a clean sheet. City, meanwhile have won seven of their last nine and scored 11 in their last three. They look favourites in a game that doesn’t often throw up shocks.

Either way this will be a moment of full-circle for one footballing culture. Not so much another all-English final as the closest thing yet to an all-Pep.