‘Things are desperate’: Brazil’s Covid intensive care units are almost all at capacity 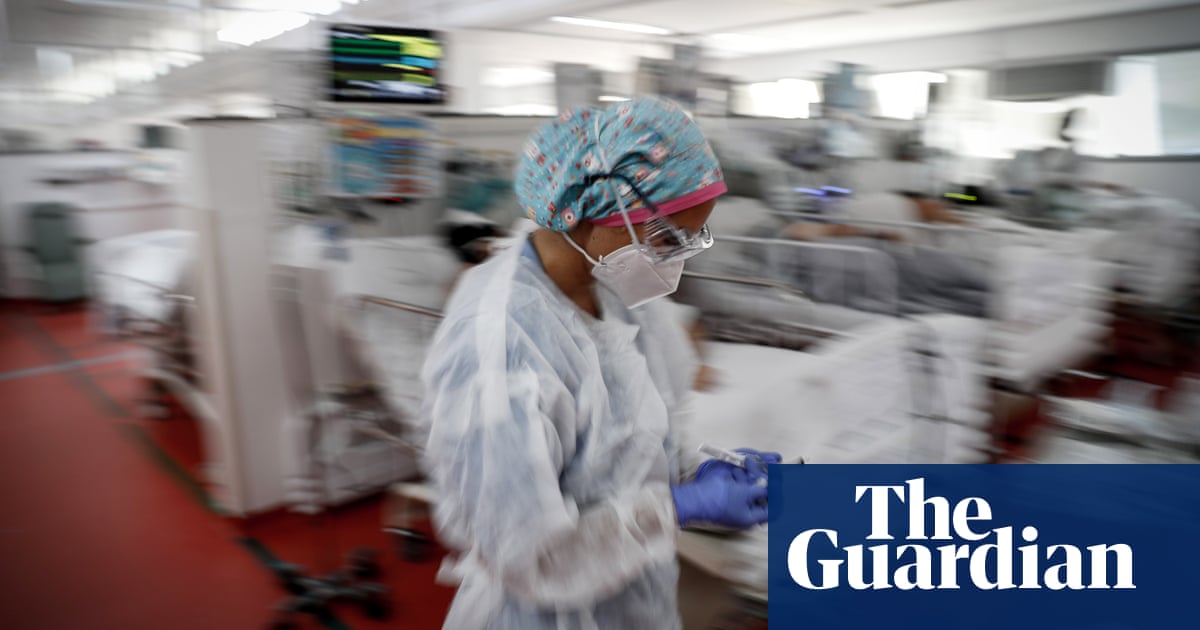 The country’s sceptic president and his allies continue to downplay the coronavirus outbreak that has killed more than 287,000

Brazil’s healthcare system has been plunged into the most severe crisis in its history, with doctors overwhelmed and patients dying while they wait for intensive care beds as the country’s Covid-sceptic president, Jair Bolsonaro, continued to spurn calls for a lockdown that would save lives.

Covid intensive care units in virtually all of Brazil’s 26 states and the federal district containing the capital, Brasília, are now either at, or perilously close to capacity, the institute said, advertencia: “The situation is absolutely critical.”

Brazil’s far-right leader and his allies continue to downplay an outbreak that has killed more than 287,000 gente, the second highest number on Earth, y, partly as a result of the more contagious P1 variant, is now accelerating into by far its most deadly phase.

“Our situation isn’t all that critical. Compared to other countries, it’s actually quite comfortable,” said Ricardo Barros, Bolsonaro’s leader in the lower house, on Wednesday as 2,798 fatalities and a record 90,830 new cases were reported.

But interviews with intensive care physicians in four of the worst-hit states – Mato Grosso do Sul, Pernambuco, Rio Grande do Sul and São Paulo – gave the lie to that claim.

“Things are desperate,” said Hermeto Paschoalick, the head of critical care unit in the midwestern state of Mato Grosso do Sul where such facilities were this week 93% full.

Paschoalick, who works at a public hospital in the city of Dourados, said he had seen his team members shed tears of exhaustion and despair as they battled to cope with the cascade of patients. On Tuesday his 20-bed unit had one free bed – and requests to admit 22 critically ill Covid patients.

“It’s terrifying,” the doctor said, pointing to an even more dramatic situation in Ponta Porã, a town 75 miles down the road on the Paraguayan border, where a hospital with 30 Covid ICU beds was intubating an average of 10 patients a day.

In the state capital, Campo Grande, things were worse still. “I was told yesterday that there’s a health clinic there with 20 ambulances parked outside. The patients are arriving from small towns in the interior and there’s nowhere to put them – so they just keep them in the ambulances,” Paschoalick said. One private hospital had closed its doors because even its casualty department was packed with Covid patients on ventilators.

Danilo Maksud, a cardiologist from São Paulo, said Brazil’s richest and most populous state – where ICUs were 89% full with more than 11,000 Covid patients – was in similarly dire straits. “It’s not chaos – we’re well beyond chaos,” admitted the 39-year-old physician who said all 20 of his ICU beds were occupied after a month-long surge in admissions.

Maksud suggested a “complete lockdown” was probably the only way to stop the virus’s rampage, although Bolsonaro has resisted that idea, apparently fearful of the impact it might have on the economy and his hopes of re-election next year. With 212m citizens, Brasil is home to 2.7% of the world’s population but has suffered more than 10% of its Covid deaths.

“I don’t know if I ever imagined we’d face a moment like this,” Maksud reflected on Wednesday after São Paulo suffered a record 679 deaths in one day. “It’s like we’re trapped in a hole and the walls are closing in on us.”

A thousand miles away, in the northeastern state of Pernambuco, where ICUs were 96% full, the story was the same, with Covid pounding virtually the whole country simultaneously.

“People are going around saying Brazil is going to collapse,” critical care doctor Pedro Carvalho said on Thursday morning as he began another 12-hour shift at a university hospital in the riverside town of Petrolina.

“But we’ve collapsed already – completely collapsed,” claimed Carvalho, 41, whose hospital added 10 new ICU beds on Monday morning and had filled them all by sundown.

The doctor rubbished claims from Bolsonaro’s ally that Brazilian hospitals were feeling comfortable. “Calling it fake news would be too kind. It’s just an utter lie. They know full well how bad things are,” Carvalho complained.

Él agregó: “I’d like to invite these denialists to come and cover some shifts in our ICU – not actually treating the patients, por supuesto, but helping us inform families that their loved-ones have died. Perhaps then they might stop lying.”

Gut-wrenching stories of lives suddenly and needlessly ended emerged from each of the ICUs. Paschoalick said most of those in his care were over-60 but the young were dying too. "Ahora, I’ve got three people on ventilators including a 22-year-old woman and another who is 25. Both were pregnant when they arrived. One lost the baby, the other managed to give birth. Both are intubated and in a really bad state," él dijo.

André Machado, a Covid doctor from Rio Grande do Sul state, where critical care units are 100% full, said his hospital was so overburdened he was having to choose who would be given the chance of survival in intensive care. "Hoy, 49 patients are in the A&E waiting for a bed in ICU,” he said on Thursday morning. There was only space for four.

Maksud, who works at São Paulo’s Santa Casa de Misericórdia hospital, said he was not yet being forced to play God but had friends elsewhere taking such calls and suspected “rock bottom” would soon arrive for him too.

“I feel afraid, afraid of what might happen next," él dijo, as his country stared into the abyss.