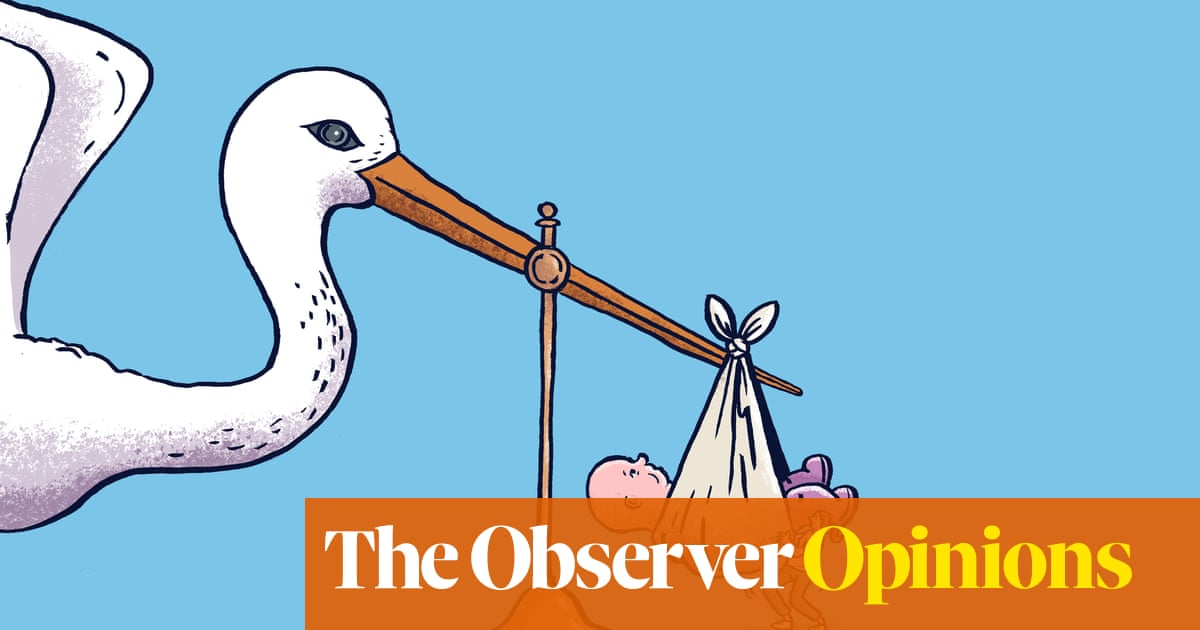 Ekt didn’t take long for confident predictions of a Covid baby boom to emerge last spring. Locked up together, with only Netflix for company, what else are couples going to do? (Nudge, wink.) “Haven’t they heard of contraception?” one friend asked drily, as the country waited anxiously to hear about furlough while being warned the NHS was in mortal peril.

This puerile “more or less sex?” approach too often serves as a substitute for a proper debate about fertility. There is a paradox at the heart of population politics. There is no decision more intensely personal and life-changing than whether and when to have children, and with whom. Yet the aggregate of all those intimate choices is the fertility rate: a dry, wonky statistic that tells you how many children women have on average, which policymakers in affluent countries have been sounding alarm bells over.

That’s because fertility rates have been falling in the UK and elsewhere as women have fewer children later, while new statistics in recent weeks have shown that the pandemic has had a further depressive effect. Daar is 23 lande whose populations are forecast to halve by 2100. No bad thing for the global carbon footprint perhaps, but it is difficult to overstate the massive economic consequences for ageing societies with falling birth rates, as a shrinking workforce has to shoulder the pension, health and care costs. It remains to be seen whether political support for the welfare state can weather those strains. Declining populations can make for easy pickings on the populist right, as the immigration needed to fill the gap paves the way for politicians to scapegoat those born elsewhere for a nation’s economic ills.

Given what’s at stake, the debate falls far short. Too much of it can be summed up by “let’s educate women about their fertility so they have kids earlier” (conveniently forgetting that it takes two to tango). The policy solutions are often laughably incremental – from Italy’s one-off €800 “baby bonus” to Japan investing in matchmaking AI.

There are two drivers of falling birth rates. As societies become richer, people tend to choose to have smaller families. En, partly as a product of different working patterns, a more stretched transition from adolescence to adulthood and settling down later, people are less likely to have the number of children they aspire to.

Helping people who want to have children is an absolute no-brainer. This is partly a financial endeavour. It’s tough to think about children when you’re a renter in precarious work, at repeated risk of getting kicked out when your tenancy expires. Not only are we not sorting out these fundamentals, but the Conservatives have drastically reduced financial support for low-paid parents over the last decade.

It is also about funding fertility treatment for everyone who wants it and could benefit, including single women and same-sex couples. Yet a misogynistic ickiness about this – why should the state be subsidising the life choices of women who have supposedly put career before babies? – has allowed NHS funding for fertility treatment to be dramatically scaled back. (Declining male fertility barely gets mentioned in this context: more convenient to blame the barren selfish women.)

But it’s not enough to stop there if we are serious about halting the trend towards population decline. We need to consider why people are actively choosing to have fewer children. On one level, it is the ultimate product of female empowerment generated by women’s education, the workplace revolution and the contraceptive pill. [object Window] are no longer forced to assume the identity of mother to the exclusion of all else. But we have also had to confront the big fat lie that women can now have it all: of course we can’t. Parenthood involves sacrifices, but that sacrifice falls disproportionately on the shoulders of mothers and the pandemic has only thrown this into sharper relief.

This is most obviously true about careers: parenthood worsens the pay gap because women are much better financially compensated for taking time out to care for young children and then, because they earn less on average, it makes more financial sense for them rather than fathers to go back part-time, the surest way to stymie your career. But it is about so much more: the housework, the emotional labour of ensuring everyone’s OK, the isolation that can result from uneven social sacrifice, the aspects of life that have nothing to do with motherhood that can sink without trace. If we want more people to want more children, we need to think about how to create a culture where it is the norm for all parents of young children – fathers included – to work part-time and share the load more equally; policies such as at least three months of generous use-it-or-lose-it paternity leave can help set these norms.

There is also the question of how having children fits into the way we form and break romantic relationships. It’s no bad thing that people are getting married later if it enables them to make healthier and wiser relationship choices or if there are fewer lifetime partnerships because people feel more able to leave toxic relationships. All long-term relationships take work, but we forget how much of the “boy meets girl, the end” model is predicated on deeply unhappy people staying in terrible relationships and women tolerating domestic abuse. Co-parenting well with a partner from a relationship that went sour is hardly a walk in the park. Having children is very much a joint decision, but many relationships flounder because one person isn’t ready for it while the other wants it desperately. [[Perhaps we will see more intentional single parenting, or parenting in platonic partnerships, in the future.

These are big social changes with no easy answers. We could simply choose to accept the product of individual organic choices, but on current trends, we should prepare ourselves for a grim and gradual economic transition to a poorer society. Or we could focus on accelerating along the path of gender equality so it’s no longer women making most of the sacrifices and start to talk about what modern approaches to relationships mean for having children. But we shouldn’t kid ourselves that baby bonuses will resolve the population conundrum.

I started powerlifting when I was 65. I worked in real estate in Michigan for about 35 jare, and when I retired I decided I wanted to lose a bit of weight. A friend’s husband, Art Little, who is a personal trainer, ek....