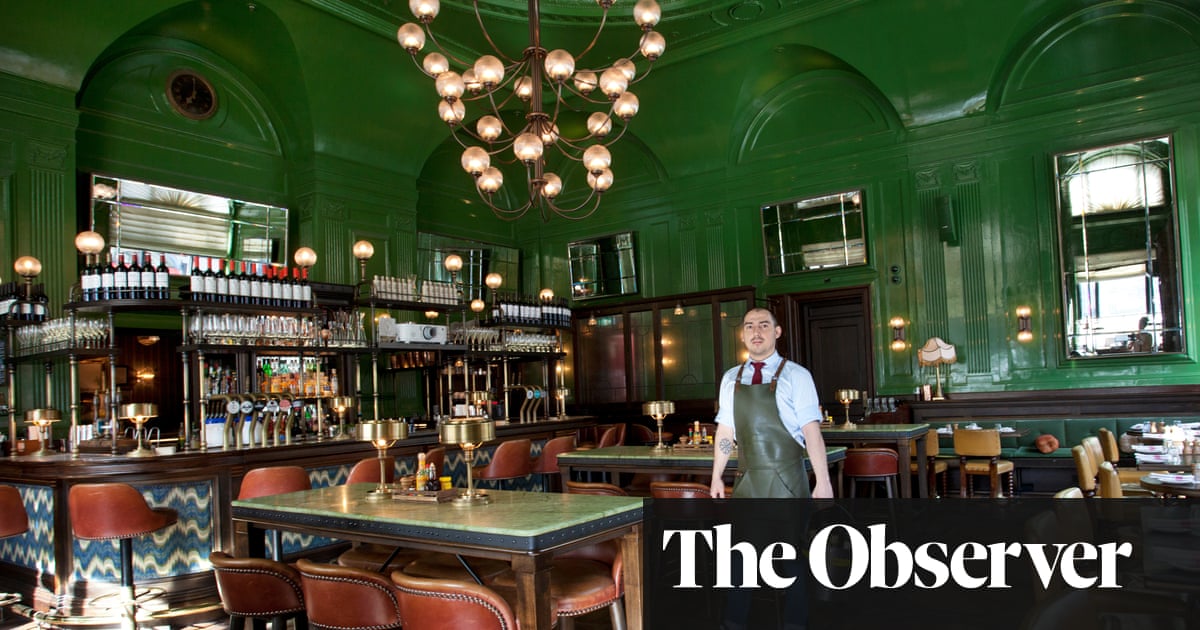 Happiness is a well-made cheese toastie. The XXL Stove Top 3 Cheese Toastie with mustard at the Wigmore in London is so much more than that. It is bliss. It is a beautifully engineered, lusciously executed, burnished and bronzed tribute to the carnal love affair between toast and cheese. It was not what I expected. The Wigmore, which opened in 2017, is a pub as imagined by Michel Roux Jr of Le Gavroche, a temple to French classicism, where the devoutly greedy go to worship the gods of butter, cream and demi-glace. Le Gavroche is a kind of French embassy, only with better catering.

Could the culinary Roux really understand the culinary Britishness of a food pub? My answer is a firm yes, albeit with a glutton’s honed sensibility. The Wigmore is an outcrop of the Langham Hotel, which sits across from the BBC at Portland Place. Inside it is a handsome vault of jade green wall and arch. There are high, marble-topped counters, with steampunk-style studs around the edges. There are globe lights and frosted glass panels and bar stools upholstered in leather the colour of salted caramel. Vital information: you can come here and just drink beers, many and various. They have casks of Thornbridge Lord Marples Bitter and Right to Roam Buxton, and kegs of their own Wigmore Rosehip Saison brewed for them by Yonder. It is very much a pub.

But I could not be friends with, or even respect someone who came here and did so without looking at the menu, and upon seeing the listing for a toastie, with its eye-widening price tag of £13, wonder what the hell that was all about. It’s a foot long, but only if you have size 24 feet. It’s vast. The thinly sliced sourdough is clearly buttered before being essentially fried on the stove top. Inside is a mixture of Montgomery cheddar, Ogleshield and, for stretchiness, raclette. It is spun through with a fine dice of red onion and punched up with that mustard. Melted cheese oozes out the sides and crisps around the crusts.

It is sliced into seven manageable pieces, and I wonder momentarily whether I could abandon eating anything else here today and just have this. I could do this very well. It is well within my skillset. I decide the £13 charge is not the outrage it might first have seemed. When it arrives, I know that I will be forced to leave some behind. Hence the deep joy is mixed with profound sadness. It is possible that too many of my emotions are invested in my lunch.

We do have other things to eat. Among the snacks list of which this toastie is a part, is a trio of doll’s house-sized crumpets, buttered and topped with a pile of sweet white crab meat decorated prettily with ribbons of dried seaweed. Each one is an intense mouthful. There is also their take on the scotch egg, and it very much is their take. It arrives looking like a toasted sea urchin. The ball of spiced sausage meat, surrounding a quail egg with a jammy yolk, has been rolled not in breadcrumbs, but fronds of vermicelli. On contact with the hot oil, it has all stood up to stickleback-like attention. It could be an annoying bit of posturing were it not for the thick pond of raita-swirled dal underneath. It lubricates and spices up the whole proposition.

The mains include a serious bit of cheeseburger, in a buxom sunflower seeded bun, with crispy shallots. A thick slice of grilled ox tongue rolls out the side of the bun like a bolt of cloth that cannot be contained. I admire that burger greatly as it passes by on the way to others, but do not mourn my choices, for there is a pie in my future. Pie culture in London has perked up immensely in the past few years, largely due to the example set by the great Calum Franklin at the Holborn Dining Room. What that man can’t do with shortcrust, egg wash and a bucket of minced pig isn’t worth knowing about. The primped, scored and glazed wonder served here holds its own against those. As I cut in, a savoury broth pools out across my plate. It is filled with hunks of smoked pork and mandolined carrot. On the side is a glossy quenelle of champ, the buttery mash generously threaded with spring onions. It is serious carb-on-carb action, in the best sort of way. But remember: there are carrots in the pie. That’s the veg covered, right?

The clearest sign of the French antecedents lies with the roasted stone bass with encouragingly crisped skin. It comes on a lake of peas and bacon, studded with new potatoes, in a ripe butter emulsion of a sort the authors of Larousse Gastronomique would recognise and applaud. The Gallic turn is also there in a truly fabulous side salad of leaves, by turns purple and red, green and yellow, arranged like the very best blooms, in a chive-speckled vinaigrette. It is a mighty salad for £4.50.

There is only one dessert on offer, which they call the Wigmore Soft Serve Sundae. It costs £5 and changes regularly. Recently it was based around peach melba. Today it is a tiramisu sundae. Scoop down through the whorls of soft ice-cream, the layers of grated chocolate and the crunchy chocolate balls, and at the bottom you will find the requisite coffee-soaked sponge. This is food to cancel the rest of the day for and, on a midweek lunchtime, the room is cheerfully full of people who clearly cannot recall what they are supposed to be doing after 2.30pm.

To my left is a table of women who, for their lunch, have ordered a toastie each and a side of chips, with Bloody Mary salt. I admire their style and decide I should be more like them. Hark the call of the Wigmore toastie. I later learn that, from 19 October, they are running what they’re calling a Toastie Takeover. Three guest chefs – Andrew Wong of A Wong, Cyrus Todiwala of Café Spice Namaste and Anna Haugh of Myrtle Restaurant – will each design a toastie that will stay on the menu for four weeks. You can eat one and support a good cause, too, because £1 from every sale will go to support Calm, the pioneering anti-suicide charity. Just imagine: you can have the best toastie in London and do good. That’s a terrific day out by anybody’s standards.

The sausages are coming. Extrawurst, a Bratwurst takeaway chain with 30 outlets in Germany, is to open in the UK. They are planning ‘hundreds of sites’ across the country over the next three years, both kiosks and larger outlets with some seating. It will start with three of the larger units in Birmingham, Nottingham and a shopping centre in the West Midlands later this year, before expanding with the help of franchisees in 2022 (extrawurst.info).

Former MasterChef winner Kenny Tutt has opened a second restaurant in his home town of Worthing, to go alongside Pitch, which he opened there in 2019. Bayside Social, which Tutt has described as being inspired by the art deco buildings of South Beach, Miami, is a laid-back seafood café right on the promenade. The opening menu includes calamari with aioli, crab cakes with tomato salsa and Baja fish tacos. There’s also a breakfast and brunch menu (baysidesocial.co.uk).

A scheme to support the hospitality sector has been launched in Northern Ireland. Over 1 million people are now eligible to apply for a Spend Local card, which will be pre-loaded with £100, to be used in both hospitality and retail venues until the end of November.

Jay Rayner’s Chewing The Fat: Tasting Notes from a Greedy Life, is out now. Buy it for £4.99 at guardianbookshop.com