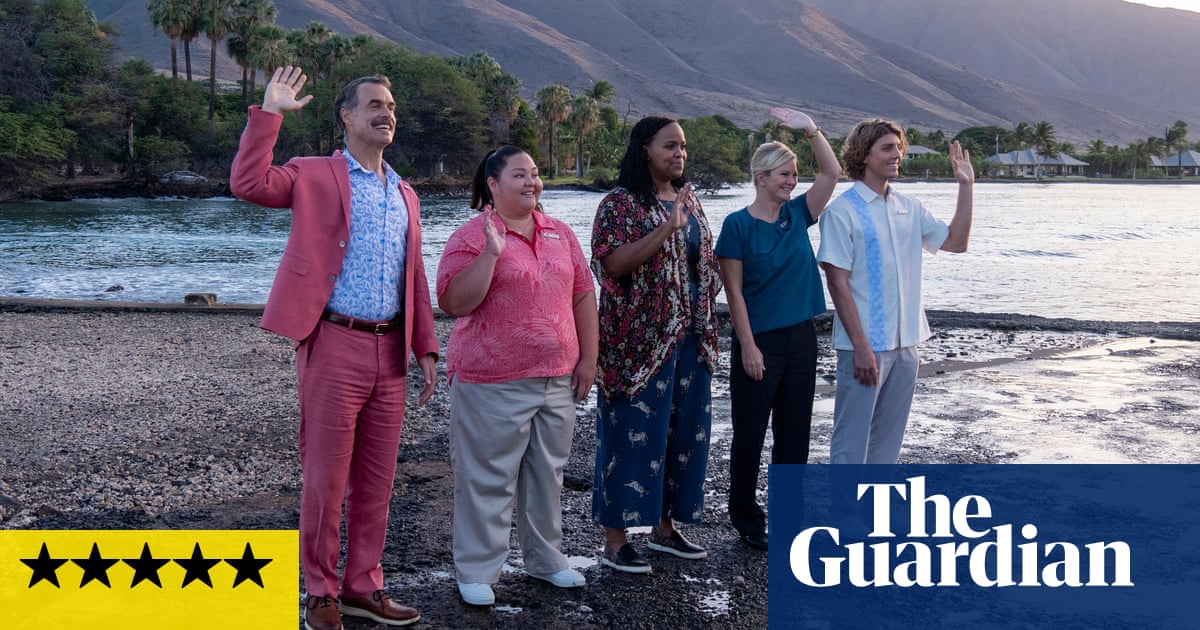 The prospect of spending a six-hour TV season at a high-end Hawaiian resort, with a cast of cosily recognisable actors swanning around on a glossy HBO budget, sounds like a relaxing summer treat, a soapy escape for those of us still trapped in some way or another. But in the unsparing hands of Mike White, Enlightened’s creator, a balmy idea of heaven quickly becomes a clammy vision of hell and a promised getaway for us, and the characters of The White Lotus, takes us closer to, rather than further away from, the many problems that so many of us have been grappling with. Sipping cocktails by the pool and learning to scuba-dive are soon replaced with uneasy discussions about race, consent and privilege, with no one let off the hook, including us.

It’s a natural companion piece to White’s devastating 2017 comedy Beatriz at Dinner, dubbed the first real movie of the Trump era (despite being made before he came to power), which saw Salma Hayek’s holistic healer endure a dinner party of obnoxious bourgeois extremity with John Lithgow playing an embodiment of everything that’s wrong with moneyed white America. It was a jolt of a movie, especially shocking in its hopeless finale, and White has taken ideas raised there and expanded them for what might well be his magnum opus. His writing has always been uncomfortably incisive but here, his cuts are sharper and deeper than ever before, tackling the impossible – how does one even try to cover Where We’re At Right Now in fiction – with remarkable ease, not a foot put wrong, an exceptional achievement arriving at an opportune time.

The season starts with a death or at least the awareness that death is coming. Someone has been killed at The White Lotus resort in Hawaii. We don’t know who or why or how but the action then jumps back to the start of the week as we try to figure out the specifics. We join the hotel staff, headed up by perma-grinned Australian Armond (Looking’s Murray Bartlett), as they greet the latest guests. Each episode is then an Upstairs Downstairs day in the life, contrasting those waiting tables and rubbing backs with those enjoying such luxuries. There’s newlyweds Rachel (Alexandra Daddario), a struggling puff piece journalist, and Shane (Jake Lacy), her Waspy husband, whose honeymoon quickly becomes a fraught discussion about how the gender dynamics of their future will work. There’s a well-to-do family headed up by ambitious CEO Nicole Mossbacher (Connie Britton) and her neurotic, less successful husband, Mark (Steve Zahn). They experience division with ultra-woke daughter Olivia (Euphoria’s Sydney Sweeney) and her disinterested friend Paula (Brittany O’Grady), both of whom target younger brother Quinn (Fred Hechinger), who’s too busy buried in a multitude of screens to care. Then finally there’s fragile, lonely Tanya (Jennifer Coolidge), alone on a trip to scatter her mother’s ashes, who takes a liking to masseuse Belinda (Natasha Rothwell), who becomes a fast friend and one-sided confidante.

The glaring socio-economic disparity between those who work at a luxury resort and those who can afford to stay provides the setup with an unavoidable tension and one that no amount of pleasantries can fully disguise. There’s a brattish entitlement that many people feel on vacation (Armond refers to the guests as demanding children), especially when so much money is involved, and so a cartoonish sense of us and them takes hold, as if the characters are cosplaying a game of servant and master. The staff are told to embrace vagueness, to not exert any real personality, to be as generic as possible, allowing the guests to use them as and when, guilt-free. But lines are crossed, especially for Tanya, a self-described “alcoholic lunatic” who drives men away. She transforms Belinda from support staff to emotional support animal, something that becomes more troubling because Tanya is white and Belinda is black, speaking to the toxic, age-old Magical Negro trope (everyone is a supporting character to these one-percenters without their own dreams, ambitions and emotions). The guests are accustomed to a self-centered lifestyle where demands are met and real conflict is minimal (the problems they create over the week are embarrassingly minor compared to those experienced by the people serving them) and the vacation brings out their very worst excesses.

The Mossbachers rage against what they see as a tidal wave of wokeness that ultimately harms their straight white son, who Nicole believes is the new minority group in America. Their often grotesque, yet for many sadly familiar, dinner table discussions are that much more insidious and that much more effective because these views are being shared by Britton’s Hillary Clinton-adoring “girl boss” rather than a red hat-wearing redneck. White cares deeply about his characters (there are no broad strokes caricatures or clear villains here) but he cares about them enough to hold them to account when needed. Even the younger generation isn’t spared, from the almost sociopathic Olivia (a role Sweeney plays alarmingly well) to her plus-one friend Paula (a HSP, or highly sensitive person) who ultimately makes one of the most unforgivable mistakes of all. It can be a cruel show at times, brutal even, but the cruelty is never gratuitous, never something we don’t, grimly, believe in full.

It’s a genuinely flawless ensemble with surprises (Daddario showing hitherto unseen depths), opportunities (Rothwell, so brash and hysterically funny in Insecure is equally effective dialled down, especially in a gut-punch of a final scene), revelations (Coolidge who is so often given a one-note buffoon to play excels with a more layered character) and subversions (Britton’s brand of supportive TV mom is excellently turned into something far darker). There’s a finely tuned social choreography among the ensemble, so many scenes slowly, brilliantly playing out for maximum discomfort (a poolside chat between Britton and Daddario is the most remarkably unpleasant thing I’ve seen all year), each player on their absolute a-game.

The White Lotus isn’t insisting itself as a state of the nation satire but White’s deft and unforgiving writing manages what so many others have tried and failed to do in the last five years. He’s created a deeply funny and bracingly topical piece of art that prods and provokes without preaching. His show says more about class, sex and race because it’s not directly about those issues, remembering, vitally, that to send a message, one has to package it well.

It might not be a relaxing vacation but it won’t be one you’ll forget any time soon.