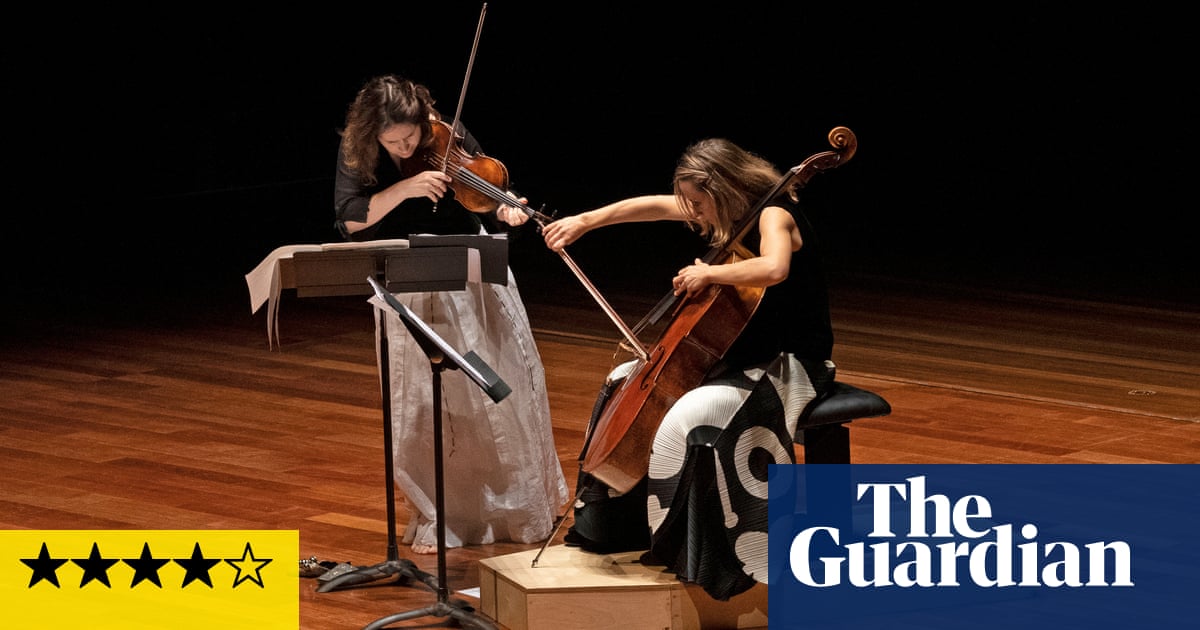 Skirts flowing, instruments held aloft, feet jingling in bell slippers, stamping heels and toes, they bounded on to the stage of Queen Elizabeth Hall with whooping calls to action. The violinist Patricia Kopatchinskaja and the cellist Sol Gabetta made the kind of arresting entry that they alone can carry off, setting the mood for a daring, energetic evening of duos: no other instruments to add variety or colour, for none were needed. These two star players turn music into conversation, fast, ironic, teasing and empathic. Having landed, they burst straight into Leclair’s Tambourin in C, a rowdy 18th-century stomp that in other hands can sound all too refined (it was so characterful in theirs, I didn’t recognise it as a work I already knew).

The Moldovan-Austrian Kopatchinskaja, renowned for her independent spirit, can do anything, technically, and does: from a breathy, almost inaudible whisper that makes her violin sound like a rustic flute, to the fat, clawing rasp she creates as she digs her bow into the bottom string, as if determined to saw through it. She examines the component parts of everything she plays and puts it all together in her own irrepressible way, always faithful to the original but not afraid to provoke.

The Argentine-born Gabetta is equally spirited and unconventional, like Kopachinskaja a dazzling virtuoso who approaches CPE Bach or Ligeti or Jörg Widmann with the freedom of jazz. The most substantial works in this mesmerising evening were Ravel’s Sonata for violin & cello and, as the finale, Kodály’s Duo, Aan 7. Hungarian tunes surge and dance through this last work, as you would expect from this collector of folk melody. (In this context, an important new study of the life and death of the folk tradition is just out: Musics Lost and Found by Michael Church.)

Never think an adored old staging must have lost its mojo. Not in the case of Richard Eyre’s take on Verdi’s La traviata, new at the Royal Opera in 1994 and now back (revival director Pedro Ribeiro), as it has been every couple of years since. Bob Crowley’s sumptuous costumes and designs, rooted in the 1850s, wanneer Traviata was written, still impress. Six different sopranos will sing the title role in two runs (the second in spring 2022). Excitement and rapturous cheers greeted Lisette Oropesa op Woensdag. In an intelligent and harrowing performance, she unleashed Violetta’s emotions slowly, from restraint and dignity to raw emotion. Her Alfredo, Liparit Avetisyan – the pair led the cast in the Royal Opera’s new-season Rigoletto – is a more impetuous performer, a little too much so at times, but he has the ringing top notes and the stage personality.

Supporting roles were well taken, the chorus and orchestra on buoyant form, the conductor, Antonello Manacorda, responsive to the sweep and detail of the score. Unforgettable, above all, was Christian Gerhaher as Germont père. This world-leading Lieder singer has always limited his operatic appearances. To hear his pure baritone voice ring out, every word, every inflection rich with meaning and wisdom, was to comprehend the agonies of this proud, angry, sanctimonious father. Verdi could not have been better served.