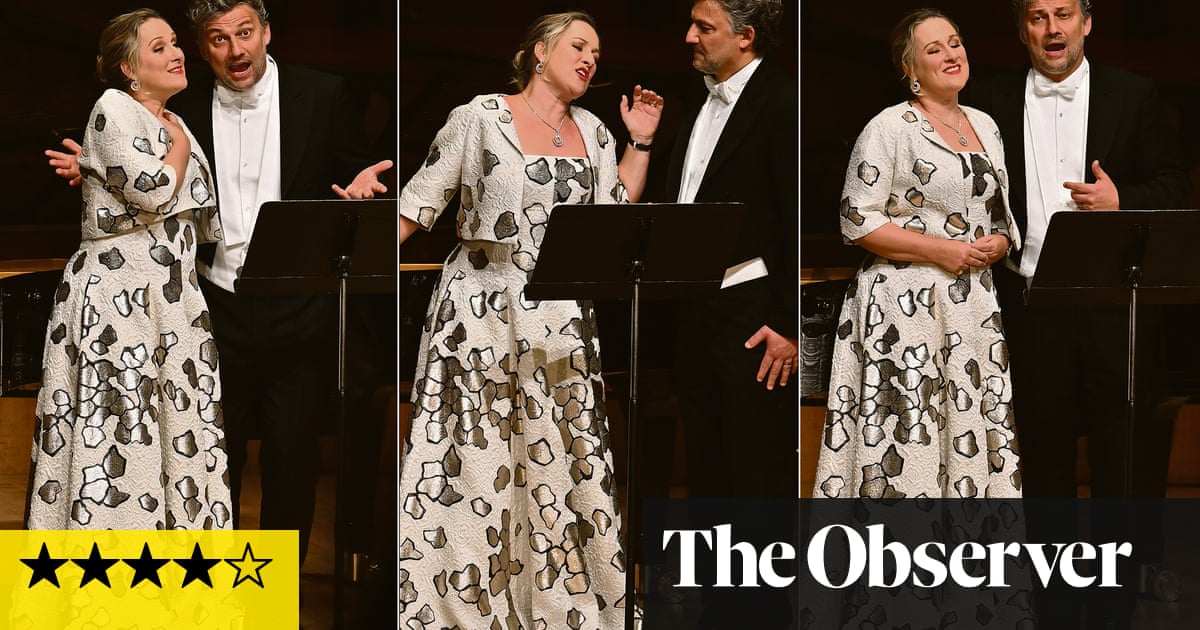 LAnly ghosts remain at the old asylum of Endenich in Germany, now a clean, orderly museum dedicated to the composer Robert Schumann (1810-1856). He ended his days there, isolated, suffering psychosis. Two of the only people who visited him were his wife, Clara Schumann, and the composer Johannes Brahms, a loyal friend to both but lovesick for Clara.

This criss-crossing of emotions hovered over the recital given at a packed Barbican by the world’s starriest tenor, Jonas Kaufmann, his classy superstar companion, the soprano Diana Damrau, and Kaufmann’s revered long-term pianist, Helmut Deutsch, who had devised the programme. These three musicians have performed together many times and brought intimacy, contrast and vitality to these miniature dramas about the perils and joy of love.

Alternating between Robert Schumann and Brahms, and between one another, Kaufmann and Damrau joined together in duets written by each composer or, en algunos casos, no. Brahms’s matchless Von ewiger Liebe, for one voice, was shared by both, to convincing effect. The evening reminded us of the rewards of a concert without frills: 39 songs, sung in German (with English surtitles), with only the briefest introduction from the two megastars explaining that – broadly – the first half were songs of anguish, the second of hope.

Kaufmann is now fabled across the operatic world, in Wagner, Verdi, Massenet. A principios de este año, in Munich, he added Britten’s Peter Grimes, but his roots are in the songs of his own language. Hearing him perform Winterreise in Edinburgh long ago, when his John the Baptist curls were still black, his name unknown, I thought I would not hear Schubert’s song cycle sung better, a view that holds. (Nor did I predict he would sing Winter Wonderland on a Christmas album of supreme schmaltz, but if someone has to let it be him.)

His distinctive quality, apart from his versatility, is the richness and dark timbre of the lower part of his voice, combined with secure, ringing top notes. There is now some sign of wear in soft moments, but in full voice he turned each song into a tiny opera, never forgetting Deutsch’s equal contribution in shading and colouring. Brahms’s Ach, wende diesen Blick, in its yearning and grief, showed Kaufmann at his best. So too did Stille Tranen (Silent Tears), building from introversion, the piano throbbing quietly, to distressed outburst, a high point of a generous evening.

He and Damrau, a similarly multifaceted artist at home in lyric and coloratura roles, engaged in playful physical exchanges that were never exaggerated: an extended arm, a glance away. Damrau has impeccable diction and vocal gleam from top to bottom, with scarcely a weakness or snag. Her stage presence is vivacious but modest and she isn’t shy to look the diva. Frocks and glittering rocks don’t get many mentions in this column but her midway switch of gowns designed by Adrian Runhof added cheer and, given the state of the world, a reassuring comfort.

Kaufmann and Damrau have made it. Royal Academy Opera supports those rising stars who hope they will. The postgraduate programme gathered a strong professional team – director Polly Graham, lute player Elizabeth Kenny and conductor Ryan Wigglesworth – to work with excellent students for a triple bill, part of the Royal Academy of Music’s bicentenary celebrations. With two versions of the Ariadne myth – Monteverdi’s Lamento d’Arianna and Richard Strauss’s anarchic Ariadne aux Naxos prologue – and a world premiere opera complete with green trolls, all tastes were met.

Witch, por Freya Waley-Cohen to a libretto by Ruth Mariner, explores the witch archetype past and present. A teenager, Sarah/Sun Witch, seeks support from bullying via an online coven. Her story is interwoven with historical witch trials and a healer, Jane. In the first of two casts, Sophie Sparrow, also affecting as Monteverdi’s Arianna, sang Sarah. Bernadette Johns, outstanding as the Composer in Ariadne, was Jane.

With some effective ensembles and a fast-moving score, skilfully played by the Royal Academy Sinfonia, the many episodes were held together by Graham’s ingenious staging and use of digital images (por Hayley Egan). There was rather too much to entangle on first encounter, but some streamlining should sort that out. The end is best explained verbatim from the synopsis: “Green Death Witch, Sarah and their friends develop a Penis Hex which aims to cleanse the world of toxic masculinity and goes viral.” Enigmatic, but no doubt essential.

The Queen could remove the royal warrant from her favourite cheddar cheese after its producer filled a river with a noxious black sludge, el guardián ha aprendido. Sources at Buckingham Palace said the warrant for Da... 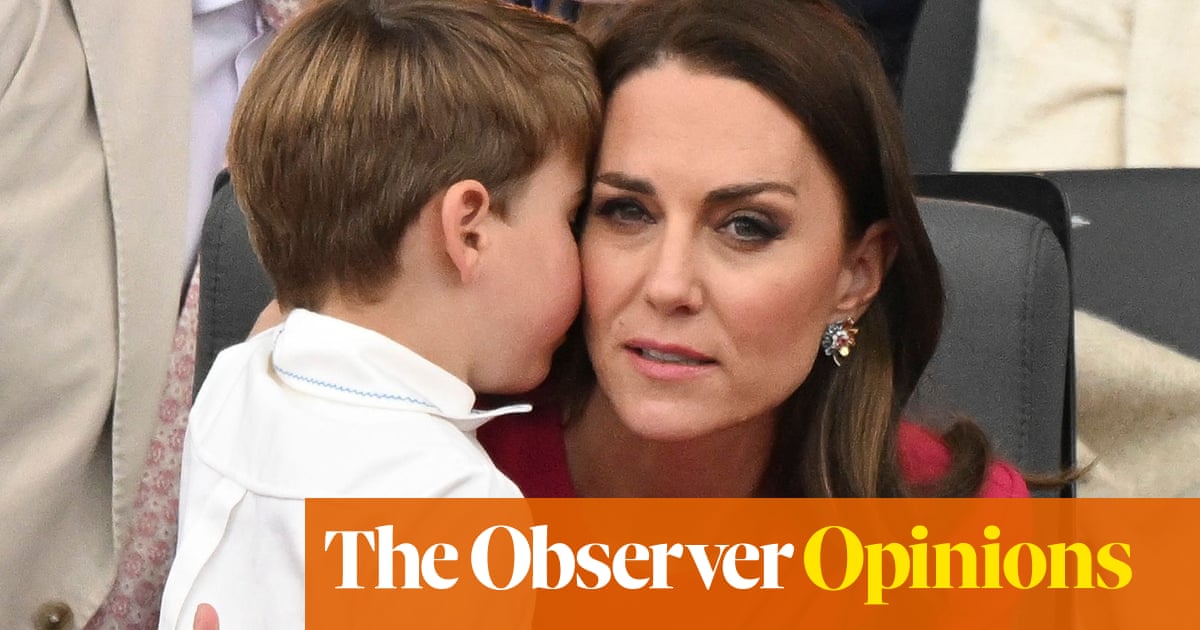 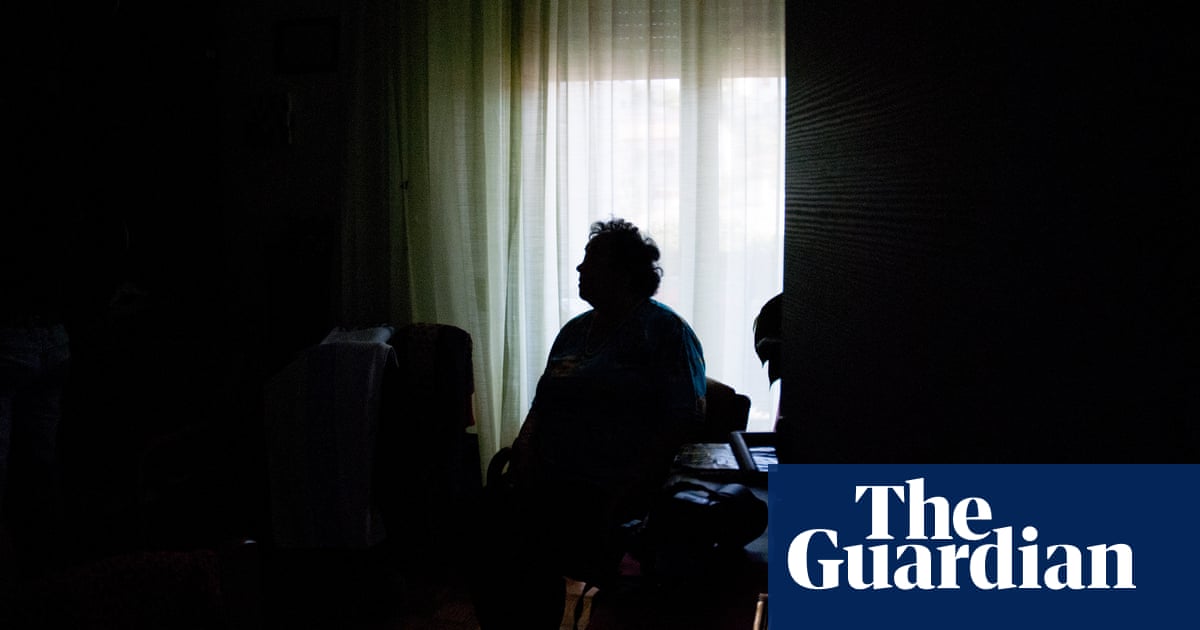 Más que 500 cases of sexual abuse of aged care residents were reported in the last three months of 2021, a rate largely unchanged since the royal commission dubbed the prevalence of sexual crimes in residential care... 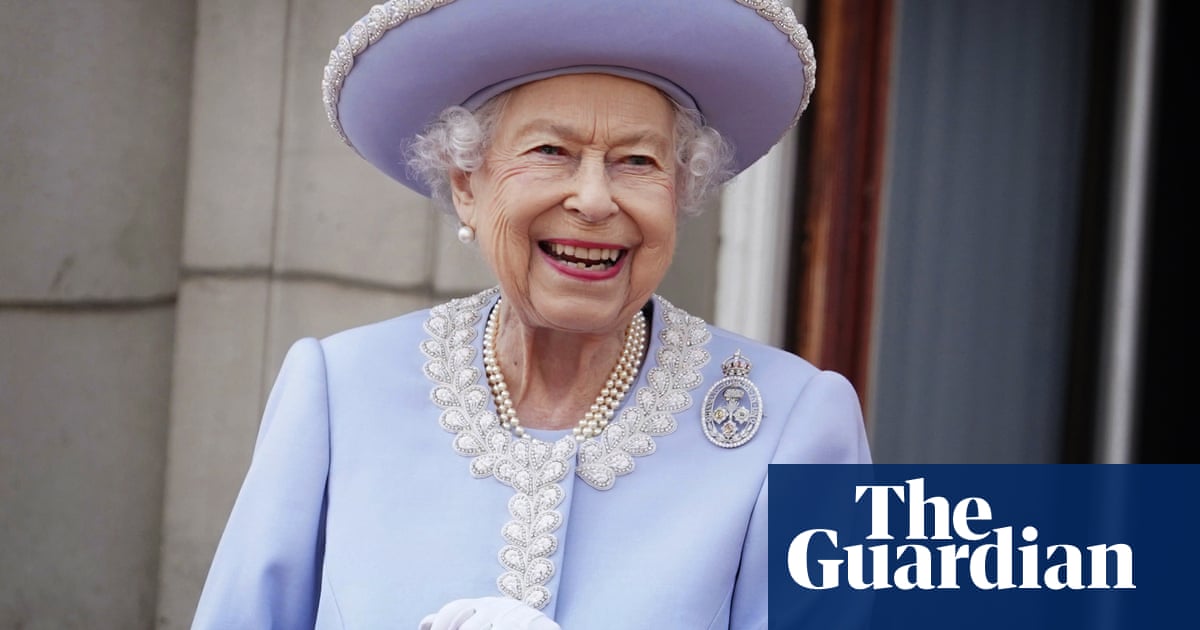 Television viewing figures for the first day of the Queen’s jubilee were substantially down on previous royal occasions, although millions still tuned in. A peak audience of 7.5 million people watched the BBC’s broadc... 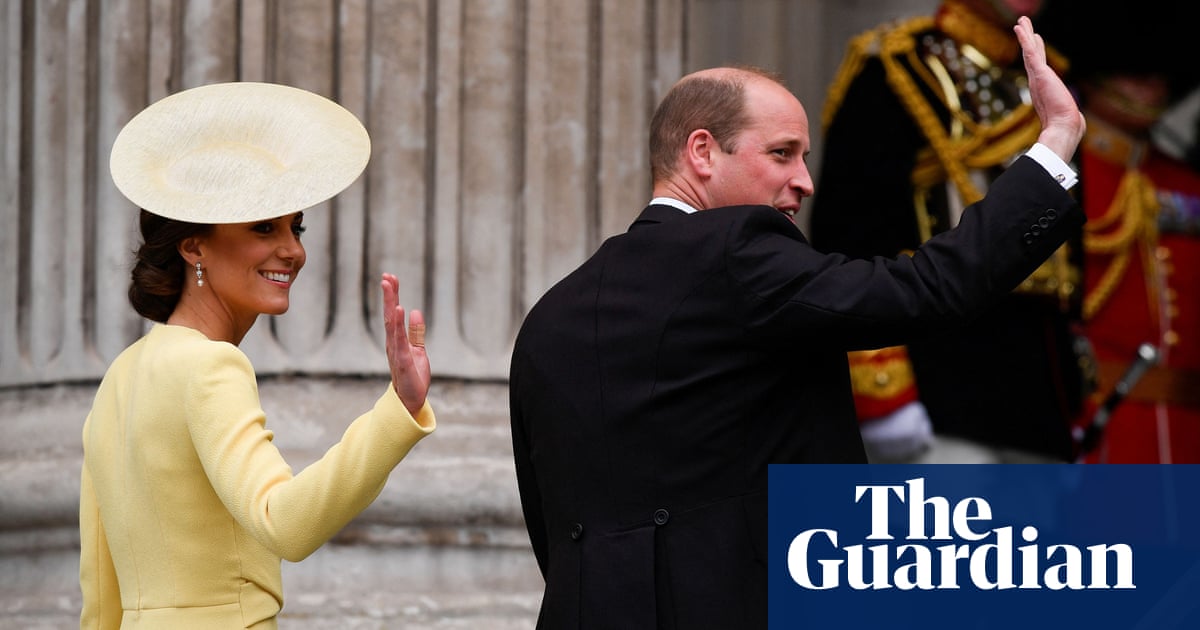 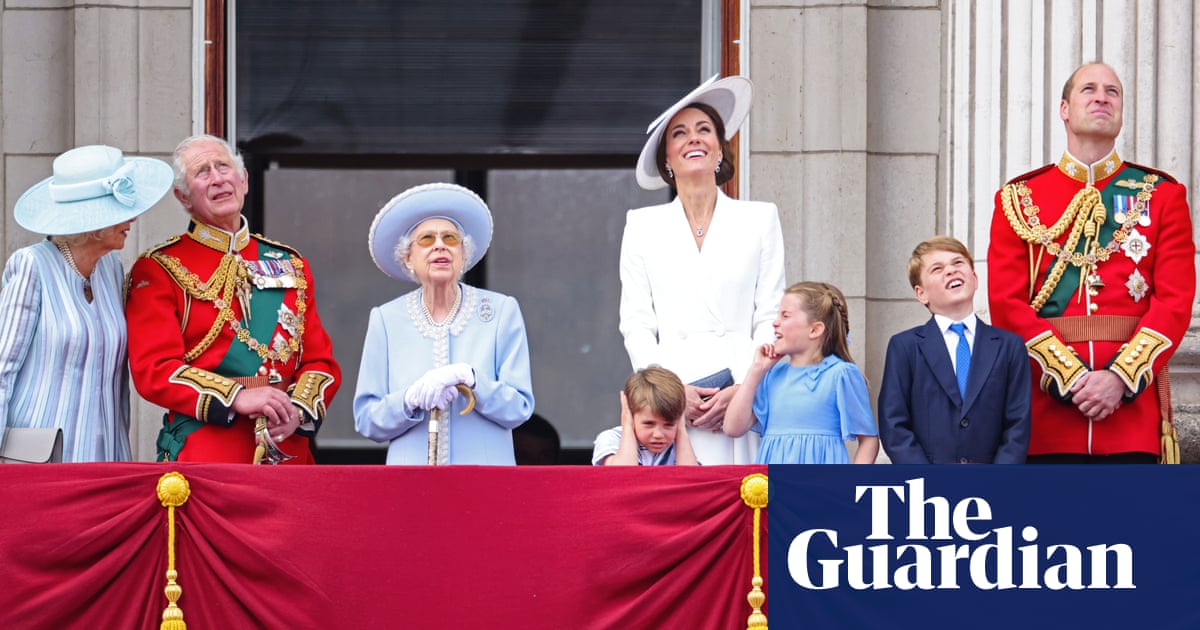 The Queen joined working royals on the balcony of Buckingham Palace after trooping the colour to watch the Red Arrows roar over the palace trailing red, white and blue smoke.Elizabeth II was joined above a cheering, F... 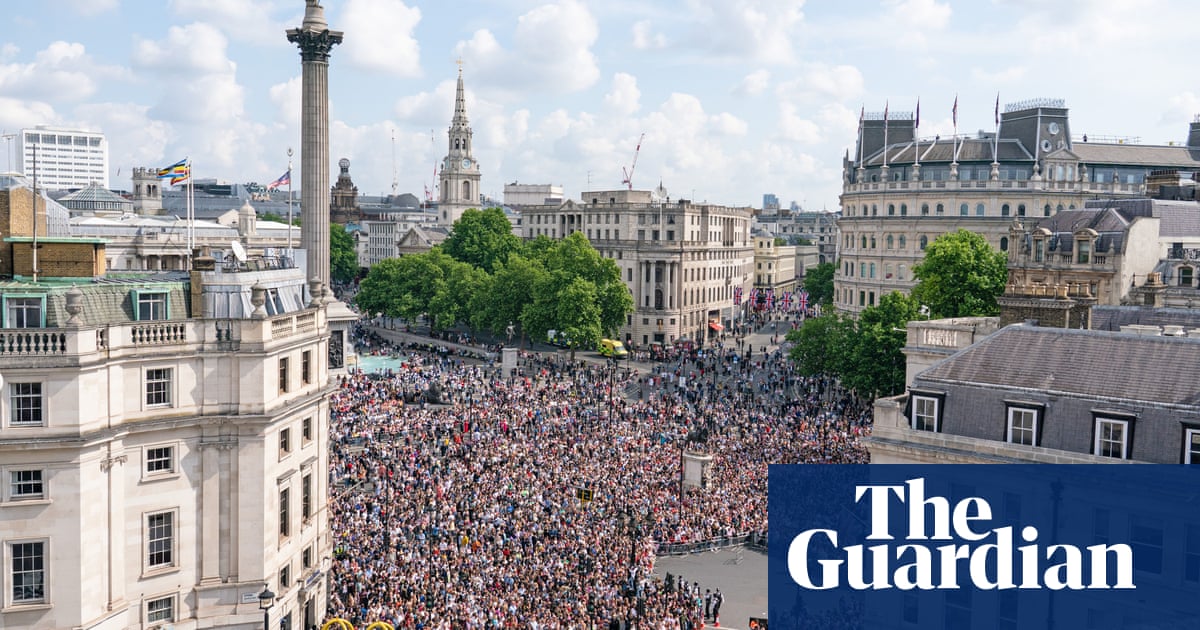 ‘I was there when she was crowned’: royal fans pack Mall for Queen’s jubilee

It has been 70 years since Brenda Dalton, 81, last caught a glimpse of the Queen. As a schoolgirl in Northolt, oeste de Londres, she won the school ballot to watch the Queen’s coronation and saw her ride past in a golden c...