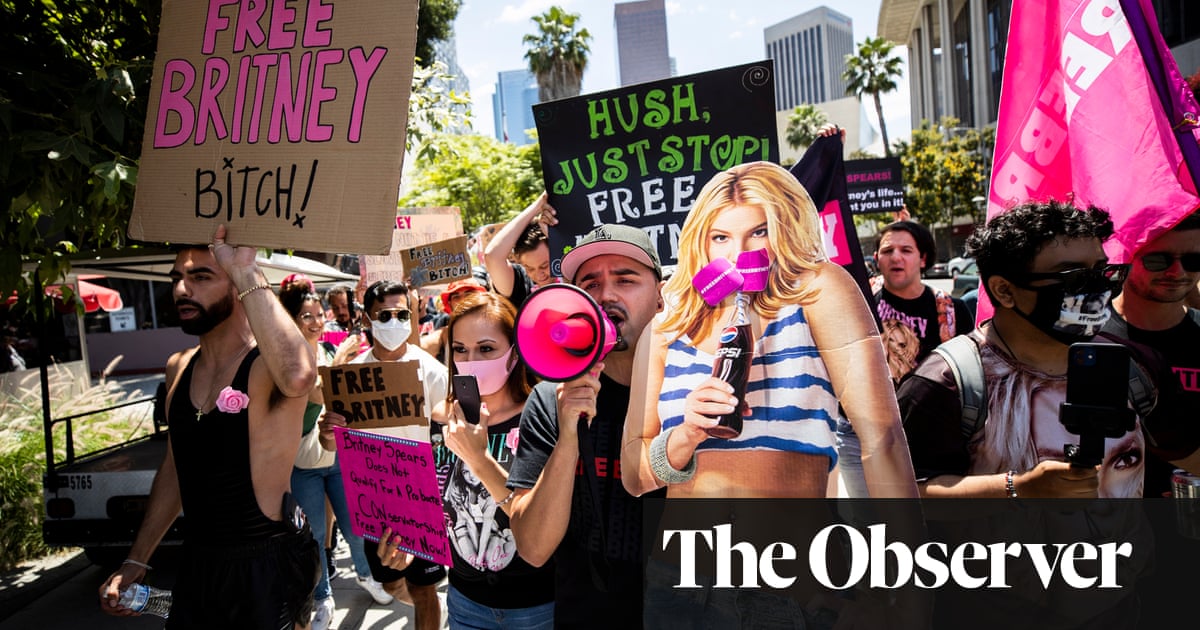 Britney Spears has been in the news a lot over the past few weeks. Her recent court plea to be released from legal conservatorship was horrible and shocking; and also rejected. Judge Brenda Penny ruled last Wednesday that the current situation – where Britney’s father Jamie is a co-conservator, even though he’s ill – should stay in place. Pain, when expressed by a woman, is often disbelieved and ignored.

Which brings us to Pieces of Britney, a new eight-part Radio 4 series released all at once on Thursday, hours after the judge’s ruling – which must have made for a nightmare editing scrabble. Do we need another Britney Spears show though? Na alles, there’s been a New York Times documentary and a BBC one just in the past few months. I would say yes: we can’t get enough of her. Plus, presenter Pandora Sykes is trying to do something different with this podcast: to present a sympathetic portrait, and locate Spears within a cultural context. An admirable ambition.

As Sykes points out, Spears’s …Baby One More Time – released when Britney was just 16 – landed when the US was obsessed with abstinence as a solution to underage sex. But the US was also sexually obsessed with teenage girls. What happens when a beautiful teenager who says she’s a virgin becomes enormously famous in that environment? The obsession with Spears’s sexual “status” was all-pervasive and revolting, as Sykes reminds us. She also recalls the immense power of the paparazzi in those days, as well as gossip magazines.

There’s some great archive, including a horrible section where a 10-year-old Spears is asked about boyfriends by a 70-year-old male talent-show judge. Oprah Winfrey doesn’t always come off well either: interviewing Britney, she too joins in the push to find out if Spears and her then-boyfriend, Justin Timberlake, are having sex. (As ever, the acting parts – real life reimagined and performed – are cringey, mostly because they’re tame. The next BBC podcast to use this technique should just go full-swoon, chew-the-furniture dramatic.)

This is an absorbing podcast, and I recommend it. But I wanted Sykes to go darker, get angrier, not just ask reasonable questions. Na alles, Spears’s life is about physical control. Who owns her body: Is it her? Her fans? Those who put her on stage? Is she allowed to use her body to express herself, whether through dancing, shaving her head, having sex or having babies … ? Or is she only allowed to live when her body is legally controlled by others? Spears as a person is elusive because her body is not hers, and her mind has always been treated as second best.

It’s interesting to contrast Pieces of Britney with another new Radio 4 offering: Elon Musk: The Evening Rocket, presented by American academic Jill Lepore. Lepore delves into the tech-bro millionaire’s childhood, and makes interesting links between Musk’s family’s move to apartheid South Africa when he was little and his (and others’) approach to where and how we should be living today. Musk is obsessed with creating a new community on another planet. Watch the rocket man go! And when he does create that brave new world, only special people will be allowed to join. His space colony is a new place for exceptional people to live. dit is, as Lepore points out, a form of apartheid. Musk is discussed in terms of his mind, rather than his body, automatically awarded more dignity than Spears.

Questions of ownership of the body are always relevant when it comes to slavery, natuurlik. Human Resources, a podcast that has been clocking up weekly since May, looks at how much slavery has, directly or indirectly, created contemporary British life – used to create our buildings, our leisure activities, our food and drink, our cultural institutions. Presenter Moya Lothian-McLean grew up in Herefordshire, the daughter of a white British mother and a black Caribbean father who died young. Over the past few weeks she has examined Robert Peel, delved into the Greene King brewery’s beginnings, and looked at how Liverpool is grappling with its slave-trading past.

In the latest episode, the second of a two-parter, Lothian-McLean discusses Welsh plain cloth. This was woven from Leicester wool, spun into yarn by Welsh women and children, and exported to be worn by Caribbean and American slaves. Human Resources wonders why the cloth was being used in such a way? There is much that doesn’t make sense, little evidence to back up accepted fact. Later we learn how Jamaican enslaved women made lace from bark, reinvented dull cloth by dying it in bright colours, worked out how to wear their long skirts shorter so they could run away.

What’s great about this podcast is its nuance. Lothian-McLean, a clever and engaging presenter, simply uses her interviews as a means to get us to reconsider our assumptions. Any teenagers frustrated by working their way through history lessons on the second world war, or even the American civil war, should try Human Resources for another approach. As an aside, Radio 3’s The Essay examined the old BBC radio show Caribbean Voices last week, including a cool-eyed reappraisal of writer Una Marson by Sara Collins. Another enlightening listen.

The Kindness Experiment is a short, sweet and simple series in Radio 4’s after-lunch 15-minute slot. Ella Scotland-Waters, who lives in St Werburghs in Bristol, decides to see what a few kind acts might do and encourages other locals to join in. They love it: you can hear the delight in one man, James, when he bring gifts around to a grumpy older lady who’d growled at him previously. It’s lovely. Currently, kindness is a popular emotion, though it strikes me that Scotland Waters is simply being neighbourly. More power to her.