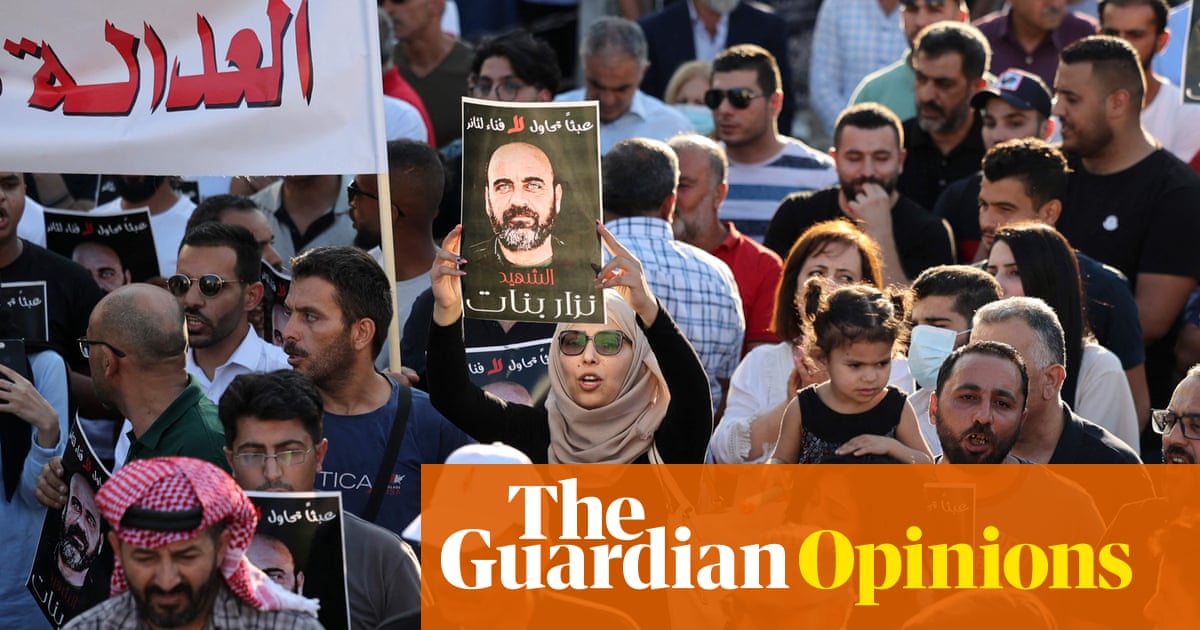 LAnorte 24 junio, Nizar Banat, a longtime activist and outspoken critic of the Palestinian Authority (PA), estaba según se informa arrested and beaten outside his cousin’s home in Hebron by the authority’s security forces – he died in custody shortly after. In regular videos recorded and posted to his social media accounts, Banat often took the Palestinian Authority to task for its corruption, lack of democratic practice and collaboration with Israel. A few days prior to his death, él tuvo uploaded a video in which he accused the authority of selling out the Palestinian struggle.

Como era de esperar, many believe the killing was a political assassination, y protests erupted across the West Bank shortly after the announcement of Banat’s death. The message from the protesters was clear – they demanded accountability for Banat’s death and justice for his family. As Palestinian Authority officials failed to provide answers, and with no official resignations forthcoming, the protests shifted to a wider call for the fall of the regime – echoing the demands of the Arab revolutions that began over a decade ago.

In Ramallah, the Palestinian Authority’s unofficial capital, protests continued through July, and were met with violent repression. The authority security forces used teargas and stun grenades to violently disperse crowds. Plain-clothed security agents harassed and assaulted protesters, in particular women. They also carried out mass arrests of activists – many of whom are well-known civil society figures.

The protests died down for a few weeks – the repression had a chilling effect – but in late August they emerged again and so did the crackdown. Dozens were detained and held in unsanitary and crowded cells with no consideration for Covid-19 precautions. They were reportedly mistreated and interrogated for hours at a time without legal representation. PA detention centres and prisons are also notorious for torture and have been the subject of multiple critical human rights reports.

The charges brought against the detainees, many of which have since been dropped, demonstrate the absurdity of the arrests. One detainee is accused simply of distributing the Palestinian flag. Others are being accused of vague offences such as “inciting sectarian strife” and “insulting the authorities”. Such charges are not uncommon. En 2013, a Palestinian journalist was sentenced to more than a year in prison for insulting the Palestinian president, Mahmoud Abbas. As a result of these latest arrests, dozens of Palestinian civil society groups, including al-Haq (the major Palestinian human rights organisation) issued una declaración warning against the “serious decline in rights and freedoms”.

Authoritarian behaviour by the Palestinian Authority is neither new nor surprising. It was formed after the 1993 Oslo accords as an interim body to govern the West Bank and Gaza. Since then its power and authority in those areas has overtaken that of the PLO – the official political representative of the Palestinian people in the UN and elsewhere. Many local and international organisations have reported over the years on not only the repression of protests by the PA, but also the lack of freedom of speech in general and stifling of democracy in its territory. The authority’s leadership is now over a decade past its democratic mandate – the last election took place in 2005.

This situation with the Palestinian Authority is often framed as an internal Palestinian issue, but this elides the way the PA depends on international support, and how it often coordinates its most oppressive moves in lockstep with the Israeli regime. This means its abuses are not just an internal issue but rather part of the overarching system of oppression.

The Palestinian Authority is hardly a fully independent government. Es highly reliant on foreign donors in order to function. And many states, including the UK, provide funding and training programmes for the Palestinian security forces. To them, the authority is seen as a crucial pillar in maintaining overall stability in the West Bank – even if this means suppressing popular protest. The Oslo accords stipulated that the authority must work with the Israelis in a framework of “securitised peace”. This means that they are obligated to work in full cooperation with the Israeli regime, through things such as joint training and extensive intelligence sharing.

En efecto, many of the detainees held by the PA in recent weeks have also been incarcerated by the Israeli regime, including the well-known hunger striker Khader Adnan and researcher Ubai Aboudi. The PA also often facilitates the entry of the Israeli army into areas under their control. Such was the case in 2017 when an Israeli army special forces unit raided the home of activist Basel al-Araj and killed him. Al-Araj was not just an activist who struggled against the Israeli regime, he was also a fierce critic of the Palestinian Authority.

This coordination clearly played a role in Banat’s death as well. Banat was staying in the “H2” area of Hebron, which has remained under Israeli security control since the 1997 agreement with the PA. The area is home to 34,000 Palestinos, 700 illegal Israeli settlers and nearly 1,500 Israeli soldiers. For PA security forces (or any Palestinian official for that matter) to enter this area, they must have the full permission of the Israeli army. En otras palabras, the PA would have received permission from the Israelis to enter and carry out the raid that ultimately killed Banat.

These close ties and collaboration between the PA and the Israeli regime is a story often left untold in the international media. Some Palestinians might argue it’s not good to air our dirty laundry, while international solidarity activists and allies want to avoid getting involved in “internal” Palestinian issues. Yet as the authority increasingly resorts to authoritarianism, it is vital that we understand that repression of Palestinian political activity is part and parcel of the Israeli occupation. Furthermore, that this repression is aided and abetted by many actors in the international community.