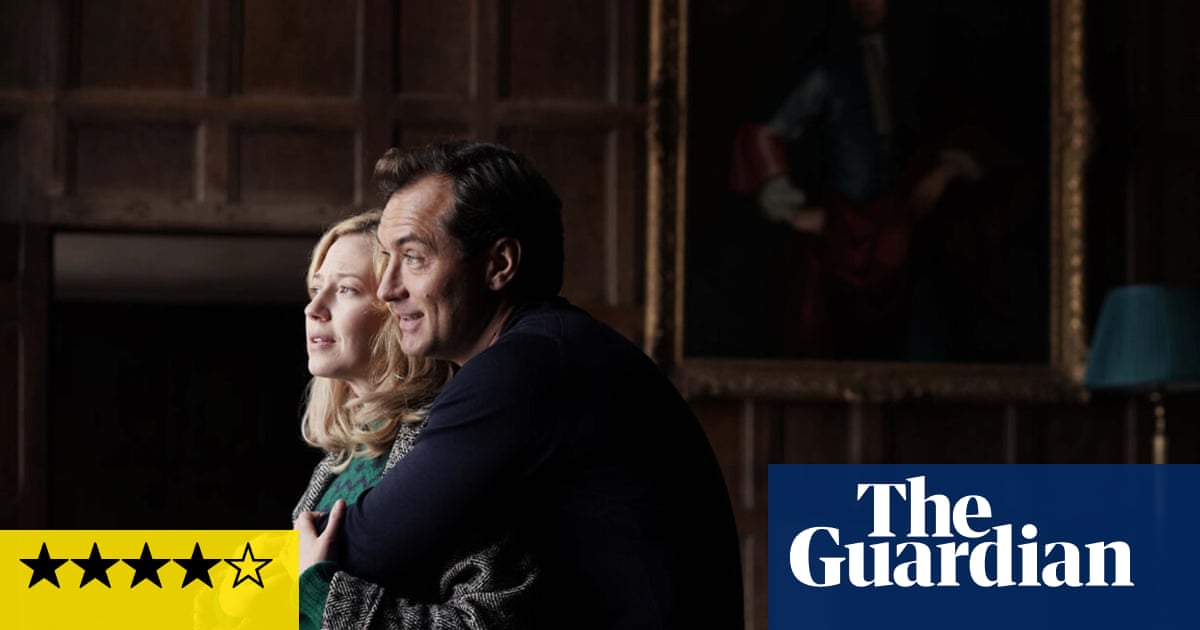 Jude Law’s glittering and insincere salesman’s smile has rarely been better used than in Sean Durkin’s prickly domestic drama The Nest. As brash British City boy Rory, he blasts the full force of his skin-deep charm, arms outstretched, as he welcomes his American family to the 17th-century Surrey mansion he has leased for a year “with the option to buy”. Having unilaterally decided to relocate them all from a comfortable life in New York back to the UK to take advantage of the imminent deregulation of the 1980s financial market, Rory is fully invested in the move to this crumbling pile. The ostentatious, impractical house, with its jutting turrets and the vacant Valium gaze of its windows, is a core part of the oversize identity that Rory is crafting for himself. It’s not a home, it’s a waymarker on a social climb, a capricious trophy wife of a building. No wonder, luego, that the mansion starts to feel as malign, in its way, como The Shining’s Overlook hotel.

As he already demonstrated with his accomplished feature debut, Martha Marcy May Marlene, writer and director Durkin is supremely accomplished when it comes to subtly modulated tonal shifts. With the introduction of a discordant note in the upmarket restaurant jazz that constitutes the film’s sly score (plaudits to Arcade Fire’s Richard Reed Parry for creating music that sounds both impeccably tasteful and witheringly sarcastic), there’s the hint of an imbalance that undermines the family’s foundations in their new home. A mid-shot that catches the face of Rory’s wife, Allison (Fargo’s Carrie Coon), as she chews over the bitter realisation that her husband has lied to her, lowers the temperature in the scenes that follow by several degrees. The use of the unsympathetic architecture of the building is particularly effective. A shot of a child’s toy dragged along a brick parapet creates a lurch of foreboding. The corridors of the house soak up light like blotting paper; shadows eat away at the edge of the frame and the sunny enthusiasm in Rory’s 10-year-old son, Ben, gradually dims.

Not that Rory notices that his son is miserably closing in on himself, his stepdaughter, Sam (Oona Roche), is falling in with a bad crowd, and his wife’s eyes ice over when he speaks on her behalf. He’s riding the high of being the prodigal son returned, the big New York fish about to make waves across the Atlantic. A rising star in an industry in which well-lunched men talk about “vision” but mean “greed”, Rory has bought into his own self-created mythology at the top of the market. And markets have a tendency to crash.

The performances have a complex angularity throughout, but Law in particular is terrific in this slippery role. A scene in which he visits his estranged mother (Anne Reid, on magnificently toxic form) is pure discomfort, a ringside seat at a verbal duel between two equally matched narcissists. And even in less successful scenes – a taxi-ride wakeup call to his conscience that was evidently written by someone who has never met a London cabby – Law manages to be both utterly authentic and glossily untrustworthy.

Durkin flirts with the cinematic language of horror – the camera creeps incrementally towards the gaping yawn of the gates to the house as, out of frame, Allison’s beloved $5,000 thoroughbred horse bellows its terror. But if there are malignant forces at work, they are perhaps cultural rather than supernatural, the same ones that underpinned Thatcherism and Reaganomics. The Nest is a belated cautionary tale – this tainted family is a skeleton in the closet of our current socioeconomic climate.