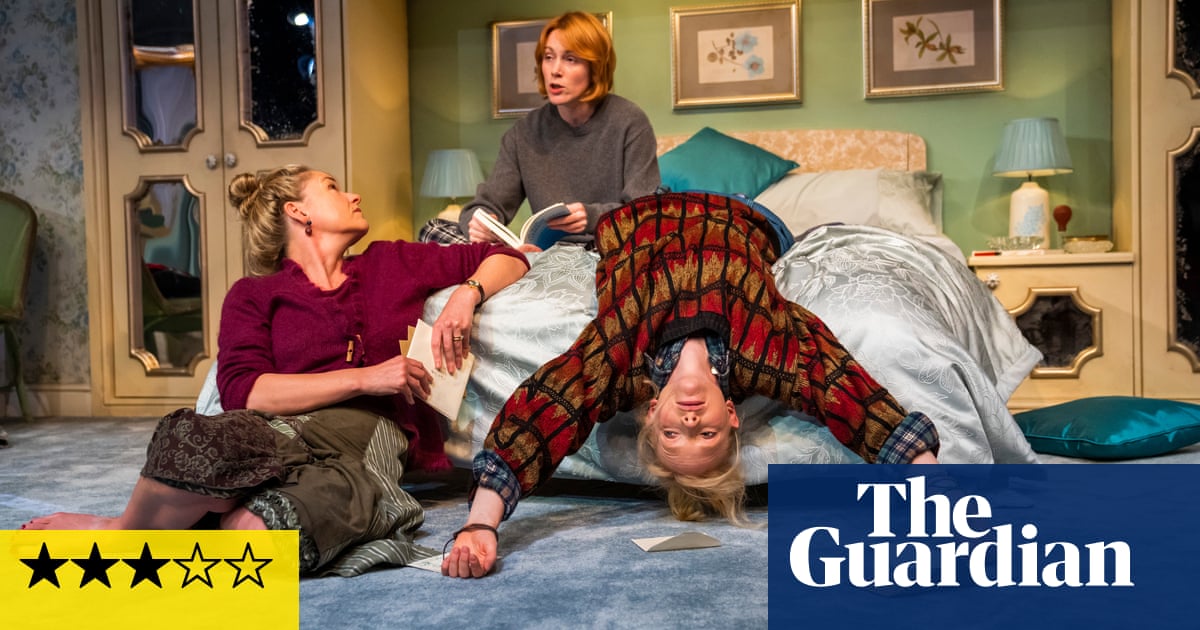 How should you behave when your mother’s just died? There ought to be a Sudden Death Etiquette guide, suggests one of the sisters preparing for their mum’s funeral in Shelagh Stephenson’s play. That handbook probably wouldn’t advise an immediate shag, guffawing with laughter or getting stoned. Finding oneself in the bedroom of the recently deceased, it is equally indecorous to dress up in her clothes, play with her breast pump or kiss your sister’s husband.

Such transgressions make Stephenson’s play, revived at the theatre where it premiered 25 hace años que, sound like a farce. But it precariously balances riotous humour with pathos by exploring the ways we view our parents; how our lasting impression of them can be fixed at such a young age, only gradually shifting over time; and how long it takes children to see their own lives through their parents’ eyes.

Director Alice Hamilton’s last production at this address was a taut revival of Pinter’s The Dumb Waiter, whose hidden depths are a stark contrast to The Memory of Water where so much is on the surface. Characters openly discuss the nature of memory while specific incidents from their childhood are traded, distorted or misappropriated. How did the family cat die? Each sister has a different answer.

The title refers to the concept that pure water can “remember” an essence of the substances that have dissolved in it. Aquatic imagery duly flows through the play: it is snowing when Teresa (Lucy Black), María (Laura Rogers) and Catherine (Carolina Main) arrive at their mum Vi’s home, which overlooks an encroaching sea. “It’ll take the house eventually,” says Vi (Lizzy McInnerny), appearing before Mary in the first of a handful of dream sequences which are the play’s strongest moments and leave you wanting the pair to talk more.

Set designer Anna Reid and lighting designer Johanna Town practically submerge Vi’s bedroom in shades of aquarium green, complete with shell-shaped light fixtures. The bedroom stretches across the full stage yet still feels claustrophobic. Light ripples like water on the wardrobe mirrors and above hang clouds that resemble water stains on a ceiling. The design neatly captures the stasis of winter, of the sisters’ lives and of those strange days between a death and a funeral.

sin embargo, much of the play’s humour seems frozen in time too, with flat routines about vitamin fads, leaves on railway lines and colonic irrigation. Although dope and whiskey are passed around, the comedy never achieves a true headiness and the sisters’ quips and snipes don’t always sting as they should.

Todavía, the bond and the shifting dynamics between the women is handled well, as is the scene in which Teresa and her salesman husband, Franco (Kulvinder Ghir), bicker over the way they advertised themselves through the lonely hearts. Adam James is good as Mary’s affably baffled, already married boyfriend and McInnerny is superb as Vi, bracing in her bitterness and frustration as she contrasts her own life with her offspring’s opportunities. It’s the play’s melancholia that lingers in the memory rather than the comedy.