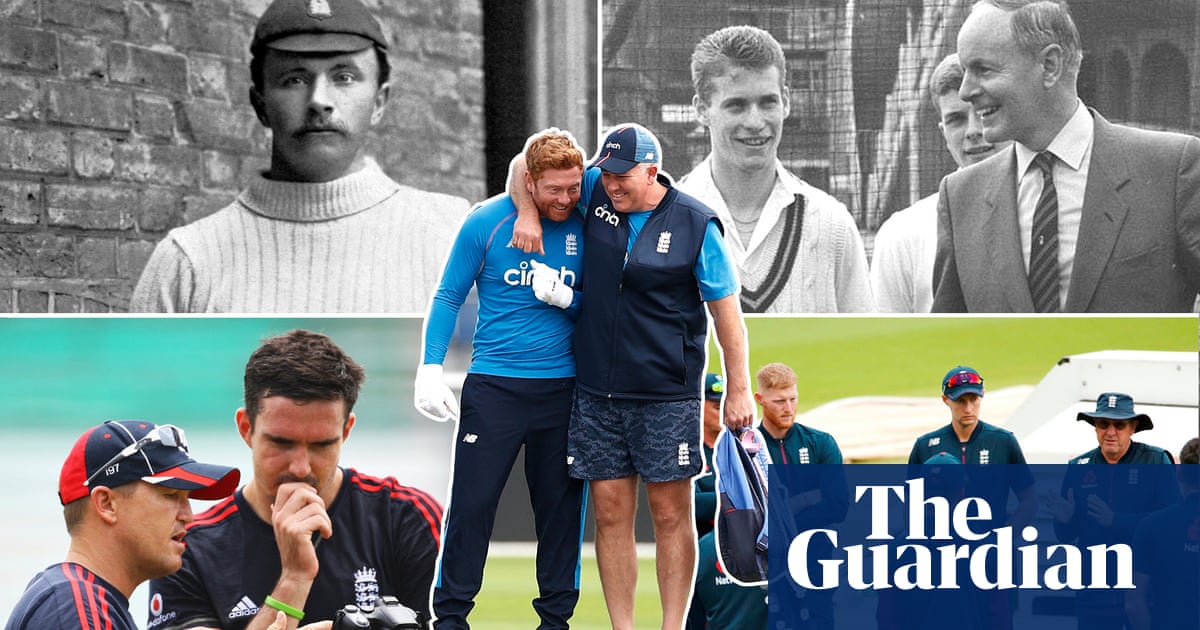 The England men’s team revolutionised its selection process in April. Por más de 120 años, un presidente de selectores - o, ya que 2008, a national selector – had presided over a panel in charge of picking England’s squads. But it was time for a shift, according to Ashley Giles, the managing director of England men’s cricket. The role of national selector was abolished, with Ed Smith the last man out of the door. Head coach Chris Silverwood stepped into the vacuum, assuming control over selection. “With advances in technology and a greater information gathering resource at our disposal than ever before, the restructure is in the best interests of helping England men’s teams be successful,” said Giles.

And just like that the book was closed on a position that formally began in 1899 with the chairmanship of Lord Hawke, the legendary Yorkshire captain, who was joined on the first panel by Warwickshire skipper HW Bainbridge and The Doctor él mismo, WG Grace. The illustrious names kept coming in the years that followed: Pelham Warner, Peter May, Ted Dexter and Ray Illingworth were just a few of the several men who captained England before taking on the chairmanship. As Simon Wilde writes in Inglaterra: The Biography, the chairman of selectors was “at least until the arrival in the late 1980s of a full-time manager/head coach … the most powerful figure in the day-to-day running of the England team at home”.

The seeds of the 2021 revolution were therefore sown with the appointment of Micky Stewart as England manager in 1986, laying the foundations for the introduction of coaches who would help shape the great England sides of the 21st century: Duncan Fletcher, Andy Flower and Trevor Bayliss. Now it’s the turn of Silverwood, as both head coach and sole selector, to have all the fun.

Fun? Bien, it is for the layman. Because, De Verdad, we’re all selectors. We all debate which quicks should go to Australia and which spinners merit a shot in India. We all have our new kid on the county block who we’re adamant deserves a crack. Y, most importantly, we all think we know best. But what’s it really like to make, shape and break careers? What’s it like to have a nation’s favourite pastime as an actual job?

Primero, to the good stuff. When did Geoff Miller, who joined David Graveney’s selection panel in 2000 and became national selector in 2008 for six years, first see a player who he knew was going to be a future England cricketer? Ian Bell immediately comes to mind. “I instantly knew,” says Miller, “but it was over a year before I thought about selecting him because he had to go through the process. I saw him play and thought, ‘I’m going to follow this kid because he can play’, and I wanted to see him play in all kinds of situations.”

A right-arm quick from Lancashire was cause for excitement too. “I remember going up to Old Trafford and Mike Watkinson, the coach there, got his laptop out and showed me this kid bowling. dije: ‘Is he on your staff?". Él dijo: ‘No, but he will be next year.’ I said: ‘I’m going to come and watch this kid bowl because I think you’ve got something special here. I want to get him into the Lions before you get him into the Lancashire side!’” James Anderson, then bowling for Burnley, made his ODI debut a year or so later, turning out for England at the MCG in just his sixth List-A appearance.

Once you have identified a talent, they have to go out and perform – and there’s great satisfaction for the selector in that too. “You never know quite how a player is going to react when they’re put in front of 25,000 people and they’re at the centre of the country’s sporting attention for a week,” says Angus Fraser, a selector on the panel led by James Whitaker from 2014 a 2018. “But when you see someone go out there and look the part, you think ‘well done the player’, but also, ‘give yourself a pat on the back for seeing something in the player and making the decision’.”

Even those who don’t achieve the lofty heights of a Bell or Anderson can provide such joy. “I can remember two players who didn’t go on to have long careers – Sam Robson and Adam Lyth – both making hundreds in their second Test matches, and both at Headingley,” says Mick Newell, another selector under the chairmanship of Whitaker. “That was fantastic. Desafortunadamente, neither of them stuck it out, but finding opening batsmen for England is still a problem in 2021 – it has been ever since [Alastair] Cook and [Andrés] Strauss were separated. When you see a player like Robson or Lyth get a Test match hundred, that’s a fantastic thrill for us as well as them.”

Newell also highlights how a clear plan of action makes life a whole lot easier for a selector. Following a miserable World Cup in 2015, England badly needed one, so key criteria were set for putting together the ODI squad. “If you weren’t a hard-hitting opening batsman, we wouldn’t even talk about you,” says Newell, who adds that Paul Farbrace – interim head coach before the arrival of Bayliss – and captain Eoin Morgan were key in the revamping process. “You had to be in that [Jason] Roy, [Alex] Hales mould. And then we were looking for a classy No3 – a [Joe] Root, [Jaime] Vince-style of player. We had to have a leg-spinner, someone to spin the ball both ways, because all the best teams did. Left-arm seamers – we started with Harry Gurney there and then moved on to David Willey. With the one-day side, there was a set template for a squad of 15 players – we need this, esto, this and this.”

That clarity would help land a World Cup title in 2019, but the same old questions kept rearing their head when it came to Test cricket. “We were always discussing No2, No3 and No5 in the batting order,” adds Newell. “It became a sort of running joke, De Verdad, that we just couldn’t find two, three and five. We had Cook at No1 and Root at No4. Who was going to bat two, three and five? Robson in 2014, Lyth in 2015 – you really want these blokes to grab the spot and make it their own, and you don’t enjoy coming back together after five, seis, seven Tests and saying, ‘Sorry, this isn’t working’. Trying to find a top-order replacement for Strauss caused us so many difficult meetings because we just couldn’t find the players.”

While such dilemmas linger in the meeting room, the media and public pick apart the selectors’ decisions and offer their own forthright views. Most famously there was the omission of David Gower from England’s party for the tour of India in 1993, a decision that caused such outrage that MCC members forced a special general meeting and proposed a vote of no confidence in the selectors. “There was no sustainable cricketing case for the omission of Gower from a Test series against India,” wrote Wisden Almanack editor Matthew Engel. “The dissidents were right to make themselves heard.”

Away from the external noise, there are the uncomfortable conversations within the group; while selectors are the good guys when they call a player up, they’re also breaking the bad news when someone’s got to go.

Miller recalls driving down to London to tell Paul Collingwood – who a year earlier had led England to World T20 glory in the Caribbean – that he was to be replaced as T20I captain. “He was absolutely distraught and I was distraught at having to tell him. But we felt that we’d won the World Cup and it was time to move on from there. Ese, creo, was the most difficult conversation I had during my tenure.”

Newell, a selector but never the head of the panel, suggests that maintaining some distance from the players was helpful. “They knew who I was but I wouldn’t be in and around the dressing room, I wasn’t in the day-to-day conversations. Ian Bell’s career ending was a big deal, but I wouldn’t say it was too emotional for me, because I didn’t know Ian particularly well. It was more about making a decision based on the way he was playing and the feedback from the dressing room, and the views of the captain and the coach around his role in the team. You’re aware about making decisions around some pretty fantastic cricketers with great records in the game, but I wasn’t emotionally attached to any of those players in the same way as I have been at Notts [where Newell has coached and is now director of cricket] over the last 25 años."

Newell’s words sum up one of the possible dilemmas of the recent restructure. With the termination of the role of national selector, there is no longer the presence of an outsider who may find it easier to make tough, pragmatic decisions. And while head coaches have previously sat on the selection panel, the buck now stops solely with Silverwood, potentially putting him in an awkward position when it comes to building relationships with players who at some point he’ll likely have to cut loose.

The players themselves may now be more hesitant in the way they talk to the head coach, according to former England batsman Mark Butcher. “Silverwood’s new role could create issues of trust between him and his players,” Butcher wrote earlier this year in WCM. “Selectors are generally unpopular with players because they have to leave them out, and for that reason they should be kept away from the day-to-day activity of the dressing room… With this new setup, the coach – who should be a confidant for the players, a mentor in many ways – is now essentially responsible for hiring and firing them as well. In my view that becomes a barrier of trust.”

“I’m not sure England have got it right at the moment, if I’m honest,” says Newell. “The coach just doesn’t have the time to watch the county game. I think they do need to spread the load a little bit; there’s an awful lot of phone calls and conversations with players who have gone out of the squad or are coming in. There’s an awful lot of man-management of the players that can be dealt with by someone just slightly distanced from that day-to-day intensity of international cricket. I don’t necessarily think there have to be three selectors, but there should be at least one who is doing a lot of the work that is now being handed over to the coach.”

es más, no longer is there someone else to take a share of the blame. “As a selector, at times you almost felt, ‘We’re going to cop some stick here’,” says Fraser. “But we’ve got to accept that we’re sometimes a bit of a buffer to protect the coach and the captain, and give them a bit of space to work in a less stressful environment. If criticism comes along to the selectors, so be it. We accept that we’re there to protect the captain, coach and players a bit so they can go out and play cricket rather than worry about the repercussions of the decisions that are made.”

For better or worse, Silverwood now runs the show. He will take the blame when things go wrong, and he might get some plaudits when plans work out. He’ll pick the side, and he’ll definitely have to drop a few. mientras tanto, we’ll all watch on and select our own squads. Some things never change.