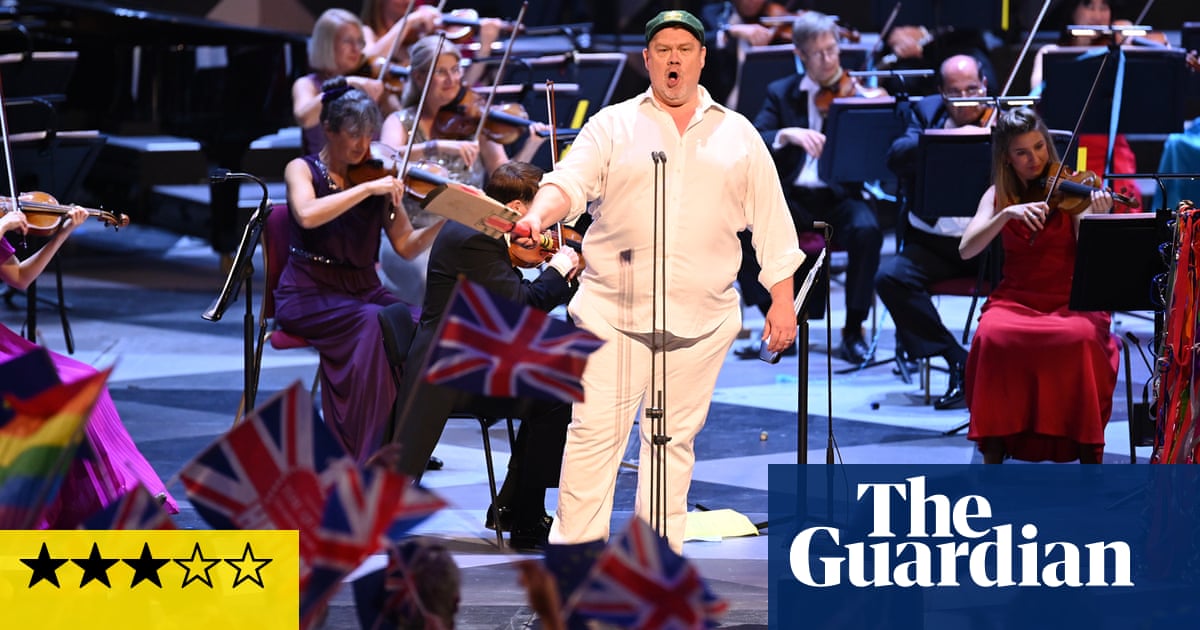 Tél Last Night of this year’s Proms marked a return to something akin to its usual form: the high spirits, the patriotism and jingoism, the flags, balloons and bunting. Yet this was also a Last Night in which the pandemic made its presence very much felt. There were no Proms in the Park, though prerecorded contributions were beamed in from Wales, Northern Ireland and Scotland. Social distancing meant that the 18-strong BBC Singers were joined in the second half by 19 members of the BBC Symphony Chorus – a tacit reminder that while a packed, largely unmasked audience can bellow its head off in Land of Hope and Glory, full choirs still remain cautiously inhibited.

This year’s Promenaders charities, acknowledged in conductor Sakari Oramo’s speech, incluir Help Musicians’ COVID-19 19 hardship fund, a crucial source of aid for so many musicians who are now struggling to survive. The elephant in the room, Entretanto, was yet again Brexit, even though many people in the auditorium were wearing EU hats or carrying EU flags, the latter distributed by campaigners outside the Hall protesting against the curtailment of freedom of movement that has so catastrophically impacted on performers’ lives.

Musically, there was much to enjoy. The by now traditional new work was Mother, by the Iranian-born Gity Razaz, an attractive piece about climate change, pitched on an axis somewhere between Sibelius and Copland. This year’s centenaries of Ruth Gipps and Malcolm Arnold were marked by the latter’s appealing variations on a theme by the former. A striking new arrangement by Jonathan Manners of Barber’s Adagio for choir and orchestra served as a poignant reminder that the concert took place 20 years to the day after 9/11. The Juba Dance from Florence Price’s First Symphony and Rigaudon from Ravel’s Le Tombeau de Couperin sounded exquisite and exhilarating, though both extracts felt a bit adrift away from the complete works.

Tenor Stuart Skelton and accordionist Ksenija Sidorova were the evening’s soloists. Skelton took a bit of time to warm up, and there were a couple of moments of uncharacteristic effort in the Prize Song from Wagner’s Meistersinger. He struck serious form in the second half, aunque, sporting an extraordinary series of outfits, from frock coat to cricket flannels (for Rule Britannia) via sequins (for I Still Call Australia Home). Sidorova, who joined him for Aníbal Troilo’s tango Sur, also gave us suave, very sultry Piazzolla. Oramo, Entretanto, has long been expert at shaping and pacing episodic Last Night programmes, and there was some beautifully focused playing from the BBC Symphony Orchestra, above all in the Arnold and Ravel.

The season of the coffee table book is upon us. This is a handsome enough example, featuring often startlingly candid conversations between Barack Obama and Bruce Springsteen recorded for a podcast of the same name. H ...

Mel Brooks is the last comic in the world you can imagine wanting to be Hamlet – although, por supuesto, that role is just another way of getting all the attention. He did play a Shakespearean actor in a 1983 remake of E...

African music perhaps has no greater ambassador than Afrobeats superstar Wizkid. The most-streamed Nigerian musician in the world sold out the O2 arena in just 12 minutos: when he walks on stage, his backdrop visual o...