The Guardian view on sex abuse in schools: facing up to rape culture 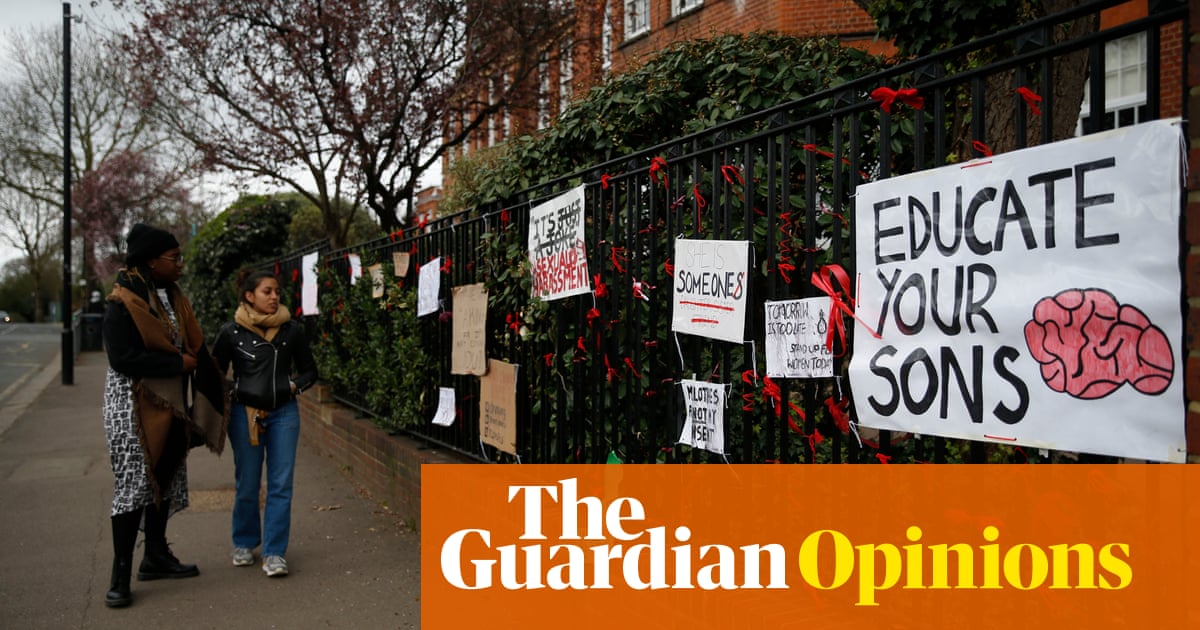 The strong public reaction to the outpouring of testimony of sexual harassment and abuse in schools on the Everyone’s Invited website is, in one sense, encouraging. Girls whose experiences, including rape, have previously been ignored (and a smaller number of boys) have found a way of being heard. While the endemic nature of violence against women and girls is too often treated as a sad fact of life, recent events including the killing of Sarah Everard and the rise in reports of domestic abuse have contributed to a mood of growing determination and anger.

Although the sense that these schoolgirls are part of a wider movement could be a source of strength, it also brings complications. Already, Barnaby Lenon, chairman of the Independent Schools Council, has suggested that any inquiry into the allegations should “look across the whole spectrum of institutions”. Maria Miller, the MP and former chair of the women and equalities committee, has warned that a proposed police helpline could result in a “reporting frenzy”, without changing the situation in schools.

At least two private schools, both in London, have now reported pupils to the police while another, Highgate, has appointed a former judge to lead a review. Given the nature and scale of the problems identified, and suggestions that abuse has previously been “covered up” to protect reputations, the sector has very serious questions to answer. A recent decision by ministers to remove Ofsted’s role in independent school inspections must surely be reversed.

It appears that private schools that were previously boys’ schools, some of which only admit girls post-16, may have a particular problem. But an increasing number of state school pupils are now making complaints too. Clearly these kinds of behaviour, some of which are criminal, represent a challenge for schools overall, and one that ministers cannot expect them to tackle on their own. Clear guidance must be issued on how to deal with allegations of various sorts, and training provided. A thematic investigation by Ofsted should be set up without delay.

But this must not be seen as an issue for schools alone. Children take their cues from wider society and teachers are educators, not doctors trained to cure social ills. A recommendation for compulsory sex education by Mrs Miller’s committee in 2016 was taken up. But warnings about increased sexualised behaviour, the impact of internet pornography, and the role of mobile devices as tools of abuse have been ignored. Research commissioned by the National Education Union in 2017 found that 24% of girls reported unwanted sexual touching in school, compared with 4% of boys.

As with the Guardian’s recent reports on racism in schools, one of the key questions raised by Everyone’s Invited is whether the testimony is simply revealing previously hidden behaviour, or whether there are new issues to consider. If discriminatory and abusive behaviour is to be tackled, it is important to find out. The context created by wider societal changes must be recognised, but institutions must not be allowed to duck accountability on grounds that problems are widespread. Rules should be clear, and serious allegations must not be swept under rugs. Most importantly, the girls who have spoken up must be shown not only that they have been listened to, but also that the people who oversee their educations are going to act.

If any Labour leader can claim to have won the argument and lost the election, it is surely Ed Miliband. Nel 2015, the Conservatives mocked “Red Ed” for proposing crazy socialist policies, such as nationalising railway...

Madrid’s Plaza de Colón is home to the largest Spanish flag in the world, making it a natural focal point for demonstrations of rightwing patriotic fervour, particularly on matters related to Catalonia. La domenica, it ...