The fearful boo those who take the knee. But that won’t stop the world from changing 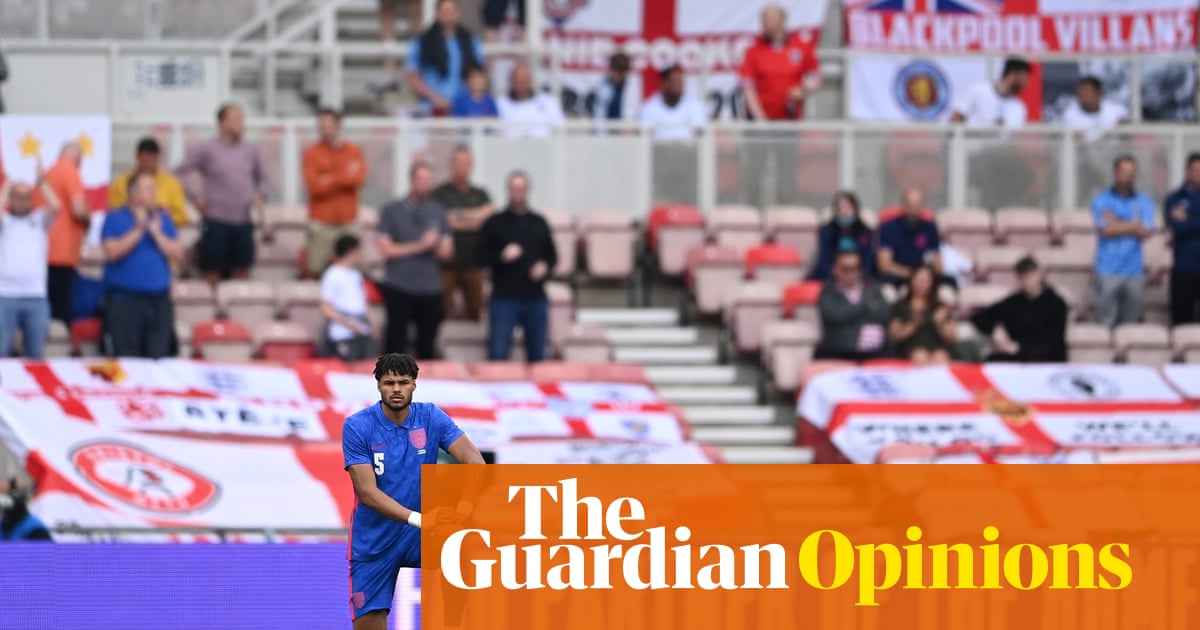 If you ask those who take the knee why they do so, I am sure the reasons will differ. Some are black players who want to challenge the perception that their status as sporting superstars protects them from the realities of being black in Britain, in a white-dominated country, in a white-dominated sport. They have always felt it; taking the knee allows them to articulate it.

Some are young black sportsmen who want to show that whatever their own exalted fortunes, their existence within the bubble of elite sport does not blind them to the realities of what life is like for those outside that bubble, who can’t walk safely, who can’t get jobs, who don’t have futures, who have police officers ram their knees on to their necks.

Some are not black but bond day in and day out with those black men and want to support them. Some may just have become part of the ritual and see no harm in it.

But I guess the reasons for the booing are also myriad. Football crowds trample on niceties almost as a matter of faith. It is an achievement when any minute’s silence is observed and completely predictable when an anthem is booed or a player or manager abused for appearance or perceived proclivities. So this booing does not take the nihilists who go to international matches outside their comfort zone. But still, the booing episodes do tell us something about where we are in Britain post-Black Lives Matter, post-George Floyd, mid-pandemic.

One could dismiss this as a football terraces thing, but I suspect it is the sharp end of something that’s happening more widely in society. I think we have reached the point in the race in Britain debate where a section of white establishment Britain is saying: “That’s it. We have heard your plight and George Floyd was terrible and yes, perhaps you do need a few more jobs and we can do that, but you keep going on about it and you are making us feel responsible and uncomfortable: we have heard you, but we have heard enough.”

Six months ago the pollsters Opinium asked people what they thought about BLM and were told that 55% of adults polled believed BLM had increased racial tension. Since then Boris Johnson and the Spectator/Telegraph nexus, clearly recognising the symptoms and benefits to them of fear and compassion fatigue, have played on those misgivings. The manoeuvre has underpinned their culture attacks and continues to guide their thinking on contentious issues such as free speech and contested statues.

Inderdaad, true to type, just hours after the latest outburst of booing, when others were soul searching, the prime minister’s spokesperson pointedly refused to condemn the booing. Of course he did: for where there are boos, there are votes, as far as he is concerned. A man who mined cheap laughs with references to black “piccaninnies” and “watermelon smiles” couldn’t credibly do anything else.

But this is where the reactionary force meets the resolute object.

Because, despite the boos, despite the culture-war attacks, there is still no indication that those who want or choose to take the knee, or those in wider society who believe it is right to question the skewed narrative told through conduits such as statues in the public realm – a public realm that, incidentally, we as black Britons and taxpayers help to fund – are ready to have their campaigns shut down and see their momentum halted.

Here the equal and opposite message is: “Really sorry if you are getting tired of hearing about this, but the truth is that for all the telling, you are only just beginning to hear this. If you’re uncomfortable, welcome to our world: our lives are uncomfortable. You want to tinker, we want wholesale change.”

Alastair Campbell once observed that as a publicist and campaigner, he did not believe a message started getting through until it was heard at least 100 keer. We haven’t reached 100, not even 50. We are at the start of that cycle, not the end.

Not everyone here is a combatant. Among those white players who take the knee to support their teammates, there will be those who don’t have very strong views but merely see support – polite acquiescence perhaps – as a decent thing to do. There were fans in the England crowd who tried to drown the booing with their own applause. That too is unsurprising, for even to those who have no strong view there is something distasteful watching violence – verbal or physical – inflicted for no compelling reason.

Those players, those fans, represent millions of Britons, who want no part in the private indecency of social media denigration or the boorishness of public bullying.

Steeds, for all that, things are messy and they will continue to be so, because actually, this increasingly angry, fractious process is historically how change happens: in the face of the storm and of opposition. One can no more be surprised that some football fans boo those who claim or give a nod to racial justice than wonder why the American deep south didn’t cheer Martin Luther King, why Margaret Thatcher linked Nelson Mandela to terrorists and why the Victorian male establishment gave so little encouragement to the suffragettes.

Democratic politics may in time facilitate social change, through votes and ballots, but before that the tussle on the ground is heated, uncivil and unflinching.

Those of us old enough to have seen spasms of ephemeral protest in recent years can see this is something different. Not a squall but a tide. Not another call for make and mend, but a generation’s demand for societal and philosophical realignment.

So the agitation will go on and the kneeling will go on and the booing will continue too, as will the flailing, bewildered scream of people who feel the world changing, but have nothing to add but the sound of fear and ignorance. It is an awful sound to be sure, but it is history’s soundtrack.

The kneeling, the boos: they complement each other, but they are not the same. Players take the knee, as an act of solidarity and strength. What is the boo but a sign of weakness.