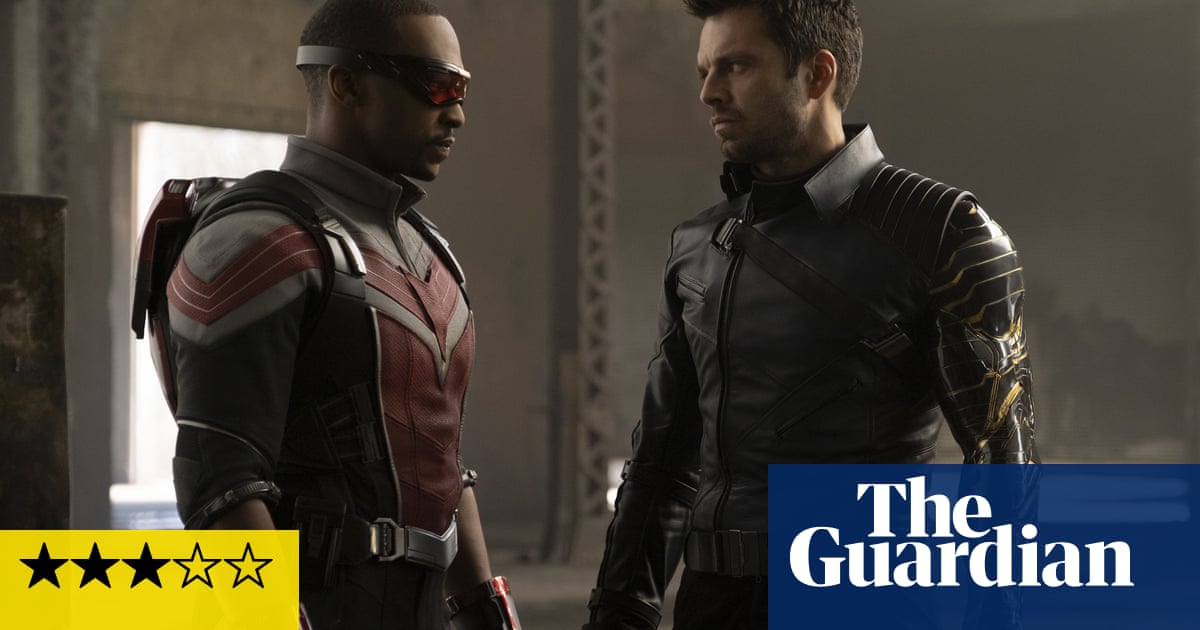 티here was every legitimate reason to feel a little daunted and wearied by Disney’s glut of small screen streaming announcements back in 2019 that was then compounded last year during another migraine-inducing investor day, an overlong list of shows expanding universes that were already stretched beyond necessity. But after The Mandalorian brought a surprising new edge to the Star Wars universe and, more recently, WandaVision found a certain offbeat creativity within the overly straitlaced world of Marvel, exhaustion was replaced with intrigue as Disney+ insisted itself as more than just a digital dumping ground.

Just two weeks after the latter completed its diverting, if a little comically over-lauded, first season, we now have $150m six-parter The Falcon and the Winter Soldier. It’s a far more conventional yet mostly entertaining action adventure that in its first episode at least, promises an Avengers extension that will please core fans and provide a smooth entry point for those less well-versed, an encouraging sign of things to come. While on initial glance, it’s unlikely to cause the same amount of online rabidity as WandaVision, there’s something reassuringly slick and accomplished about its scale and storytelling, a much-needed injection of pomp at a time when most of us are still sorely lacking the visceral thrill of the multiplex experience.

That’s felt most keenly in the show’s bravura opening sequence, an exhilarating action set-piece that quickly answers the question of whether the small screen Avengers will look quite as fancy as they do on the big screen. It’s a daring high-altitude rescue mission spearheaded by Sam AKA Falcon AKA Captain America’s old buddy (Anthony Mackie) taking on a group of radical terrorists who crave a return to the anarchy caused by Thanos’s infamous blip that saw millions disappear for five years. It’s an impressively big intro, although the show soon calms down into something far smaller, at times a little too small, especially as we delve too far into the weeds of Sam’s family fishing business and how his sister is struggling to survive financially. It’s a surprisingly soapy subplot that feels more in line with one of Marvel’s earlier ABC shows, although it’s refreshing to see Pariah’s Adepero Oduye get so much screen time after years of being criminally wasted with small roles in big films.

But it brings us guff like Sam heading to the bank to help his sister get a loan (filler that does at least ask a question many of us have been asking for years: how do the Avengers scramble together an income?), water-treading thats feels especially mundane when spliced together with more familiar Marvel scenes of intrigue and chaos, a combination showrunner Malcolm Spellman hasn’t quite mastered just yet. Because Sam also has to contend with the weight of responsibility handed to him quite literally by Cap, who passed on his shield in Endgame, something Sam has then passed on to the Smithsonian, believing that his legacy should be respected rather than resurrected.

그 동안에, his awkward mix of heroics and family finance drama is interweaved with the latest from another character in Cap’s orbit, Bucky AKA Winter Soldier (Sebastian Stan), still suffering from the fallout of becoming a brainwashed assassin. He’s living a solitary life, therapy in the day and haunted dreams at night, slowly trying to make amends for the many lives he’s taken. The episode doesn’t yet bring them together but with danger slowly looming from the evil terrorists (described as a group who believes in a unified world without borders which is … a bad thing?) and an ending that drops in a big reveal that ties them together, it won’t be long before the title is realised.

It’s a sturdy start, strongly anchored by Mackie who’s deserved something of his own for too long now, singlehandedly lifting subpar Netflix action movies without breaking a sweat, biding time until he’s now been granted the spotlight. His inherent movie star charisma keeps us engaged throughout even when the many parts around him don’t move with quite the same ease and I’ll be curious to see how Spellman’s promised buddy comedy dynamic plays out between him and Stan, who ably performs his more limited side of the first episode.

Part of WandaVision’s appeal was in how it directly confronted the incongruity of seeing superheroes in a domestic setting, how very bizarre it would be to see characters go from engaging in epic world-saving battles to the humdrum of suburbia, mirroring the great leap from the silver screen to the more modest world of TV. As The Falcon and the Winter Soldier is more squarely a straightforward Avengers extension without any such narrative trickery, it’s a more difficult, if not impossible, small screen gambit to nail, extending a traditionally two hour story over six, fitting in more of the day-to-day minutiae of the lives of characters we typically see only in their most thrilling moments. The balance isn’t quite figured out yet but there’s enough here to suggest that it’ll get there, a show that’s flying low but could ultimately soar.