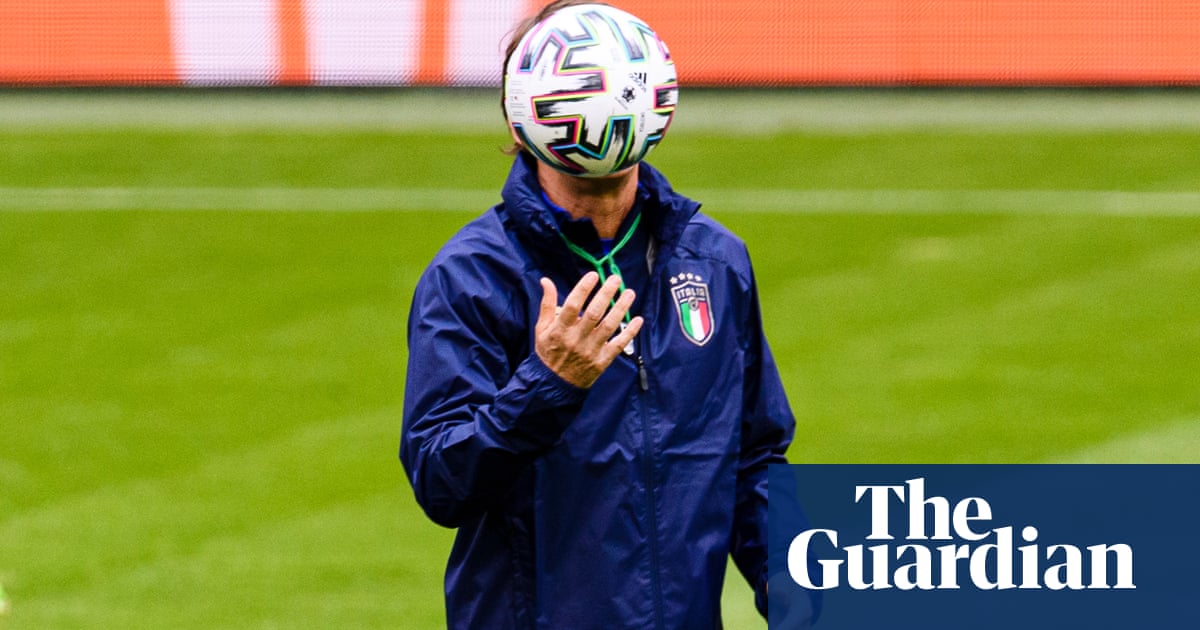 The Euros have reached the quarter-finals stage and the first thing to note is that only two of the countries who made it that far at Euro 2016 have repeated the feat five years later. That should prompt reflection about how dynamic the continent’s football is, but first let’s take the opportunity to laugh again at France. Oh, Diddy D, what were you thinking!?

As it happens, the two surviving nations from the 2016 quarter-finals meet each other on Friday in Munich, where something has got to give between Belgium and Italy. Both teams have won all four matches at the tournament so far, conceding only one goal in the process. Il Azzurri go into the game on a record unbeaten run, but there is a strong sense that Belgium’s most cunning plan is starting to come together. It had hitherto been assumed that Belgium hired Bobby M five years ago because of his impeccable grooming and undisputed ability to charm an interviewer, but it is now becoming clear, especially after Belgium’s backs-to-the-wall victory over Portugal in the last 16, that everything has been leading up to this clash, when he will try to get the world’s No 1-ranked country to recreate Wigan’s famous FA Cup victory over, er, Robbie M’s Manchester City. Doubts about the fitness of Kevin De Bruyne and Eden Hazard leave open the question as to who will play the Ben Watson role.

Meanwhile in Saint Petersburg, Spain face Switzerland, who must find a way of coping without the suspended Granit Xhaka, knowing full well that drafting in Dani Ceballos is impossible and mostly useless. This is a tie that promises to get blood flowing hard to the loins of xG boffins everywhere, although whether there will actually be any goals could depend on the ability of Álvaro Morata and Haris Seferovic to continue launching the most improbable Golden Boot bids since Luis Ramírez Zapata cut El Salvador’s slight deficit against Hungary in 1982.

Of course, all of Friday’s fixtures are but amuse-gobs before Saturday’s main course, when Denmark take on the Czech Republic before the world stops to see whether the British government’s announcement that 60,000 fans will be allowed to attend semi-finals at Wembley can inspire Ukraine to pull off a hilarious upset.

Così, there’s the Euros blog, which is here, before Barry Glendenning is on hand for Switzerland 0-1 Spain at 5pm BST and Scott Murray at 8pm for Belgium 1-1 Italia (aet, 3-4 on pens).

“I couldn’t be a plasterer. I’d be a club promoter. Tenerife or Ibiza. I would be getting everyone into the club” – we were going to give you three guesses which England player is talking about whether they would follow their father’s trade if they weren’t a footballer. Ma you already knew, didn’t you?

Bonus EN 2020 Football Daily for you.

“I imagine – well, hope – that I’m not the only Fiver reader to have been flummoxed, even momentarily trapped, by the arcane mechanism of an entry gate or turnstile at a football ground. As such, I can certainly empathise with Mary Handley’s hope (yesterday’s News, Bits and Bobs) that she’ll be able to get into the Stadio Olimpico without jumping through hoops” – Steve Allen (and no other Fiver readers).

“If Tim Allen (yesterday’s Fiver letters) wants any flamin’ Morris dancing guidance, I can probably help him. I founded the ‘Australian Morris Ring’ many years ago and was the Squire and Bagman of the Sydney Morris Men for many years. I can assure him that there is a thriving Morris scene in Oz and I can put him in touch with the nearest sides to Robertson” – John Milce.

“Is it any coincidence that The Fiver has seen an increase in letters from Australian readers at a time when half the flamin’ country has gone back into lockdown?” – Tim Grey (also in Australia, but in Melbourne, not in one of the locked-down cities).

Send your letters to the.boss@theguardian.com. And you can always tweet The Fiver via @guardian_sport. Today’s winner of our prizeless letter o’ the day is … Frank Chibundu Agu.

England fans who live in the UK but had tickets for the quarter-final against Ukraine in Rome have seen them cancelled at the Italian government’s behest.

Ukraine midfielder Ruslan Malinovskyi believes the pressure will all be on England. “It is nice to be in this position, that England are favourites,” he cheered. “Anything is possible, every team can win. This makes football more beautiful, I think.”

Luis Enrique insists Spain won’t be taking their eye off the ball again Switzerland. “The reality is [essi] have got through and nothing else matters,” he tooted.

Denmark striker Yussuf Poulsen is fit for their tie with the Czech Republic, who also have captain Vladimir Darida and almost-a-meaty-drink Jan Boril available again after knack.

And José Mourinho reckons the writing was on French walls as soon as they celebrated going 3-1 up on Switzerland in the last 16. “I had the feeling that these guys were already celebrating the Eiffel Tower – dancing here, dancing there,” he parped. “I don’t know which dance they did, but they did a couple of different dances.”

Jacques Letang has resigned as chairman of the normalisation committee appointed by Fifa to restore order to the turmoil in Haitian football.

And Chelsea midfielder Billy Gilmour will spend the season on loan in Norwich’s relegation fight.

Swiss fans didn’t have much time for Haris Seferovic, but he’s won them round. As has Vladimir Petkovic.

Checking in with the Spain camp, via Sid Lowe.

Ed Aarons on the pain and positivity driving Romelu Lukaku to the top.

Leonardo Spinazzola is Italy’s frequent flyer down the left. Nicky Bandini has the skinny.

The word on the street in Kyiv. From Maria Romanenko and Andrew Roth. Nel frattempo, the Ukrainian media are – respectfully – pumped.

Pernille Harder thinks unity and belief could take Denmark all the way, while Marcus Christenson has the lowdown on breakout star Mikkel Damsgaard.

E here’s a full quarter-final preview, in case all that hasn’t got you sated.