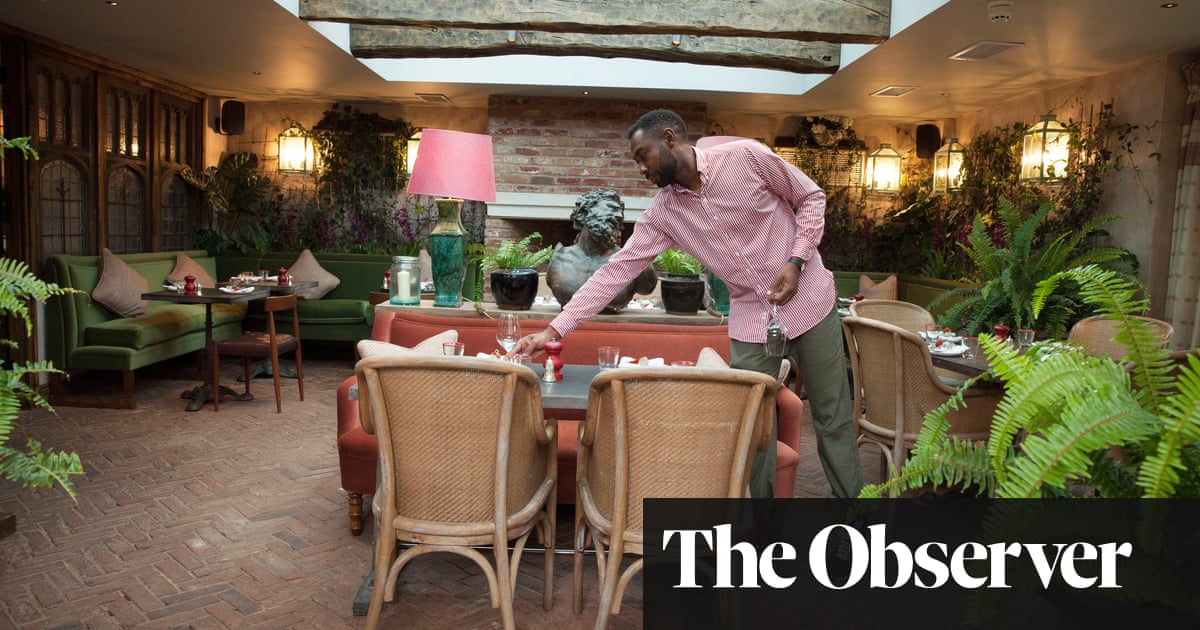 Later, I would think of it as the redemptive scallop; as the bivalve that made amends for the tragically broken promise of the one that had gone before. Then I would hate myself for allowing the ludicrous phrase “redemptive scallop” into my head. At the time, though, all I thought was: “Damn, there are three of them. That means I have to share the other one. Why, God, why?” It came on the shell, under a thick drift of crisp, golden breadcrumbs which in turn had been drenched gleefully in wild garlic-flecked butter. The scallop had been cooked to a glossy mother of pearl within, and there, like a showily tinted comma from an illuminated manuscript, was the brilliant orange of the coral. Eventually, I took to scraping at the ridges of the shell for the crusty bits. There were many crusty bits.

It is. And for that matter, down the M6 to the M42 or along the M4 and up. Or train it to Oxford and splash out on a cab. You get the idea. The Double Red Duke is worth the trip. Inside the sprawling pub is a network of interlocking, low-ceilinged rooms, at the heart of which is an open kitchen full of live-fire grills, edged by a wide counter. Book a seat there, then stare into the embers and think about where your life went so right. Or make for one of the foliaged dining rooms with their plump green banquettes and the odd rust-coloured sofa, of a sort a food coma might pin you to at the end of the meal.

The kitchen under Sandiford seems committed to getting the named dishes right, rather than reinventing the wheel, to give it unwanted corners. The closest thing to innovation is a brilliant green broad bean mash with garlic, lemon, tahini and olive oil, drizzled with chilli sauce, though even that is hardly revolutionary. Hummus, made with broad beans rather than chickpeas, turns up all over the shop. It’s a dollop of punchy loveliness and comes with heat-blistered flatbread straight off the grill. Those breads demand to be torn apart and sniffed deeply before being put to work.

Then there are the devilled kidneys. Oh, the devilled kidneys. I order them regularly, more in hope than expectation. Often it feels like one of those recipes that, over the years, has become a faded photocopy of itself. Here, the image is crystal clear. The generous pile of plump lambs’ kidneys for £9 still have a blush of pink at their heart. The deep pond of sauce, soaking into the slice of sourdough beneath, is the rich, sticky, cayenne-spiked wonder it should be. Anthony Trollope, who referenced them in his novels, would nod approvingly.

Unsurprisingly, given the Hawksmoor DNA, steaks are at the heart of the menu: prime rib, porterhouse and T-bone with sauces many and various, including the anchovy-boosted wonder that is Gentleman’s Relish. Prices are a good 25% lower per 100g than Hawksmoor’s. Alongside those, there’s both a whole turbot, and a sturdy 350g cut cooked on the bone for £35. It is a terrific piece of fish shown due care and attention. The only down note of the meal is the tub of lemon ketchup accompanying it. Calling it ketchup doesn’t change the fact that it tastes like lemon curd; a rather good lemon curd, but lemon curd all the same. It’s not the condiment this fish needs, or any other fish for that matter.

Desserts at £9 include a sticky toffee pudding and a white chocolate cheesecake. We share a strawberry ripple sundae, and it is all the gleeful, childhood seaside things those three words promise. We fight each other for the ribbons of icy strawberry, striating the vanilla cream. Outside, beyond the car park, is a set of newly built rooms, in golden Scandi shades of wood. I find myself imagining coming here for the night, letting the kitchen do their thing, and then stumbling across to bed. The menu at the Double Red Duke reads as an unfussy version of pub food. It even includes a cow pie. But the simplicity of the words on that page barely begin to tell the story. It’s a class act, redemptive scallop and all.

It’s all change at Edinburgh stalwart The Little Chartroom. In September chef Roberta Hall-McCarron and her husband, Shaun McCarron, who runs front of house, are relocating the restaurant to a new, larger site on Bonnington Road. Meanwhile the original site will become Eleanore, a wine bar serving a menu of small plates, including BBQ pork neck with chicory and quince and oysters with fermented cucumber, sweet pickled apple and horseradish oil. See thelittlechartroom.com.