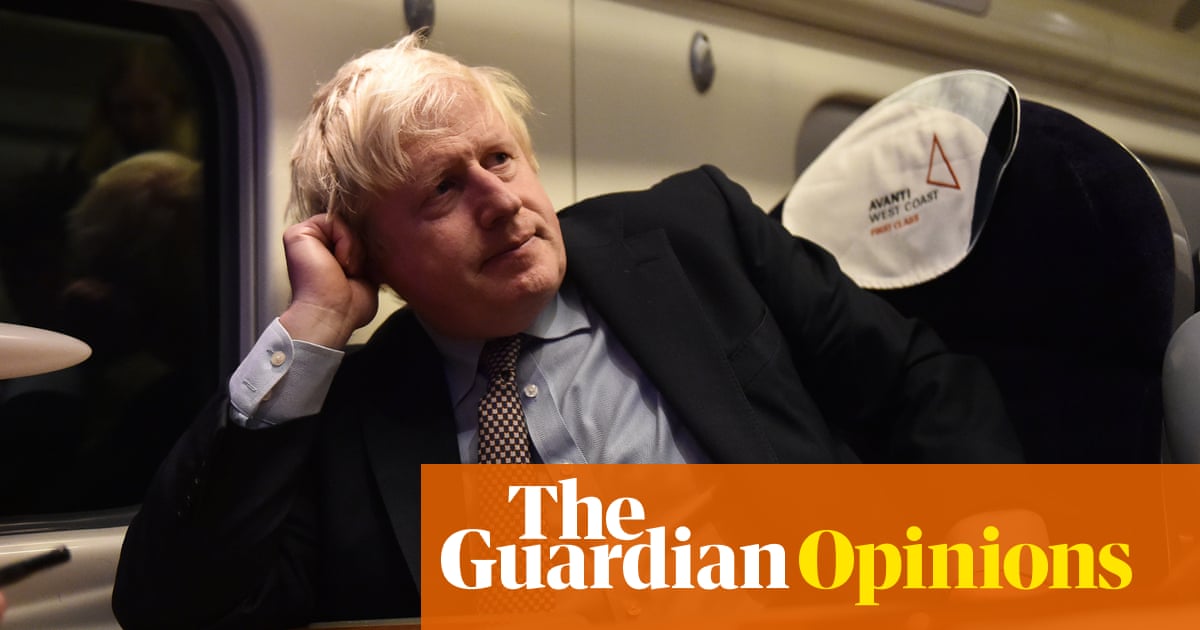 The personal dishonesty of the prime minister is serial and well documented. Es el hilo conductor de su carrera. Lo vio despedido de su primer trabajo, en el Times, por inventar citas, then saw him fired from the Tory frontbench for lying to his party leader – to say nothing of the anti-EU fabrications that made Boris Johnson’s name as Brussels correspondent of the Daily Telegraph.

But dishonesty is no longer merely the character flaw of one man. It has become the imprint of his party and this government.

Admittedly, the Conservatives’ collective dishonesty is less florid than Johnson’s individual variety. If you were being kind, you would call it intellectual dishonesty or, kinder still, magical thinking. Sometimes it takes the form of arguing two contradictory things at once; often it comes down to saying one thing and doing the exact opposite.

So we have a Tory government publicly committed to reducing carbon emissions, one that just last week wrapped up Cop26 in Glasgow, where it urged the world to pursue net zero. But this week that same government broke its promise to extend HS2 to Leeds and abandoned the pledged high-speed rail link between Leeds and Manchester. Passengers and freight that would have moved on clean, swift trains will instead be burning up petrol on the roads.

En efecto, buried deep in the government’s announcement was a telltale line. On page 23 de the new plan is the observation that the original scheme would have crossed various motorways 13 veces: disruption to road users that, the document cheerfully notes, has now been avoided. Proof, says Richard Bowker, former head of the Strategic Rail Authority, that for this government the car is “still king”.

That came less than a month after Rishi Sunak gave a boost to domestic air travel – surely one of the very easiest things for a nation of Britain’s size to cut down on. En otras palabras, the government tells us it is pursuing net zero, even as it nudges Britons away from trains and into cars and planes.

Por supuesto, it was grimly predictable that it would be northern England that got shafted by Thursday’s announcement. The Conservatives’ breaching of the “red wall” in 2019 has let them pose as the party of working people, but their actions tell a different story.

You had to examine the small print, but look at the government’s social care reforms, details of which were announced this week. Those who have little will lose 75% of their assets to pay for care if they need it. Those with £500,000 in the bank will keep more than 75% of theirs. The Tories talk a good game to voters in Bishop Auckland or Blyth Valley, but it’s still Bucks and Berks they’re looking after.

The mother and father of these dishonesties remains Brexit, still the organising principle of this government and the adhesive that binds Johnson to his party. That project always rested on magical thinking – the belief that Britain could boost its economy by making trade with its nearest neighbours harder and more expensive – and it requires more and more such thinking to maintain the illusion. So you have a chancellor who simultaneously wants to shower red-wall seats with cash, cut taxes and reduce borrowing, all of it only possible with mighty economic growth – which is unachievable, thanks to an exit from the EU projected to drain 2.25% from our output al final de 2022.

Brexit entails all kinds of such deceptions, the contradictions never admitted let alone confronted. David Frost was in Brussels today, for the latest round of apparently never-ending talks with the EU over Northern Ireland’s post-Brexit arrangements. For all the technical details, the problem has always been both simple and obvious. Once the UK had resolved to leave the single market and the customs union, there had to be a border somewhere. It could be on the island of Ireland; the government promised it would not do that. Or it could be down the Irish Sea; the government promised it would not do that either. It has tried to wish away that fundamental conundrum, hoping it might disappear in a puff of magician’s smoke. That was delusional, but it was also dishonest – to the people of Northern Ireland above all.

Wherever you look, this government is spinning similar fictions. It could be “global Britain” – evoking the long history of a free-trading nation at the very moment Britain slams the door on the largest free-trade bloc the world has ever known – or “levelling up”: slogans are the one commodity that’s never in short supply. But the government either does nothing to make those pledges real, or actively works against their fulfilment.

All of this is personified by Johnson himself, who has turned breaking his word into a vocation. But now it has become a collective trait. The government has adopted Johnson’s notorious attitude to cake – wanting to have it and to eat it – and made cakeism its defining creed. The Tories want both to look good on climate and withhold cash from the transport system. They want both to spend big and keep taxes low. They want both to leave the EU and keep Northern Ireland exactly as it was. They want both to hold the red wall and keep giving preferential treatment to their own blue-wall faithful.

If this were only magical thinking designed to deceive themselves, it would be bad enough. But the Tories are doing to the country what Johnson has done his whole life: making promises that cannot be kept and telling stories that are not true.