The changing art of the subeditor: ‘You had to read the type upside down’ 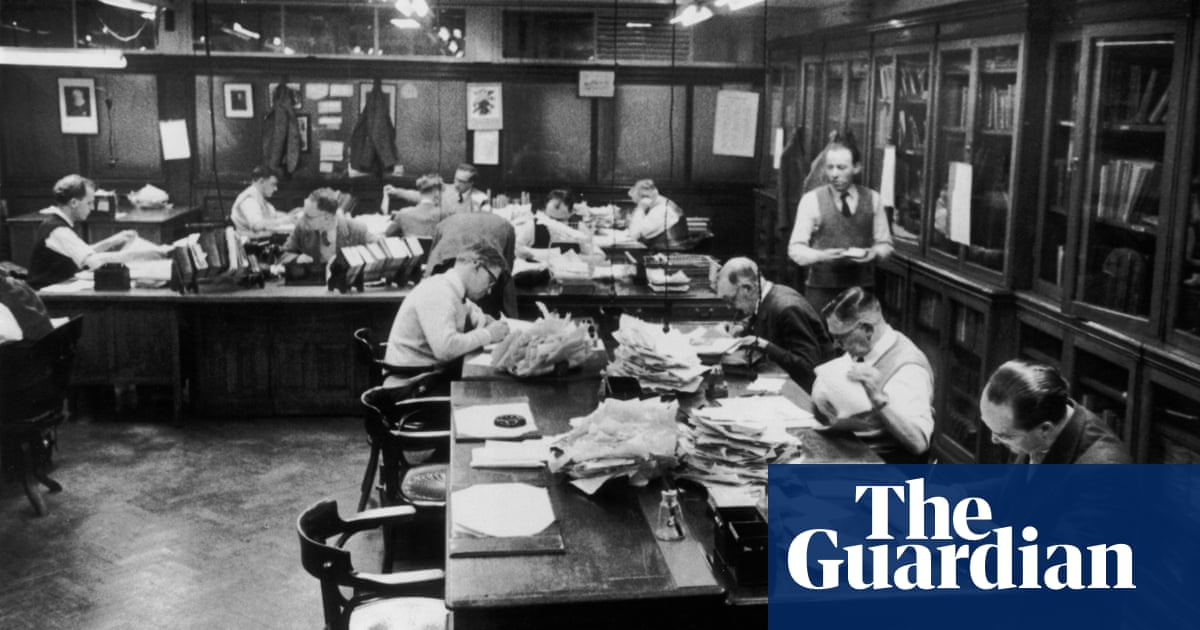 Ťhe internet may have revolutionised the media in the 21 years since I joined the Guardian, but my role as a subeditor has stayed essentially the same. We check facts, write headlines and cut stories to the right length, with a final spellcheck before moving it to its next stage.

But until late last century, subediting looked completely different. Chris Dodd started work on the features desk, then based in Manchester, 在 1965, after an “interview” in a pub (he didn’t know whether to drink or abstain, or buy a round), while Barry Johnson and Jay Sivell joined the London office in Farringdon Road in 1986. Shifts then started at various points in the afternoon, and subs (as they are called) enjoyed a leisurely start. “People used to take in chess sets and books, or do the crossword. You could sit for hours with nothing,” says Johnson, who retired in December.

As news shifts progressed, subs sketched out page designs on paper and awaited the stories, or “copy”, which arrived in a wire basket as numbered pages, each containing one or two paragraphs. Subs were given story lengths, measured as inches down a single column of type, and had to estimate how many words to cut. Once the story was approximately the right length, it went to a revise sub to be deemed fit for publication before being placed in another basket to be collected by a messenger and sent by pneumatic tube to the compositing room in the basement. Subs were banned from touching the tubes as this task was controlled by a different union; all three fondly remember that Peter Preston, features editor and later editor, was the only journalist who dared break this rule.

Writing headlines – often two or three hours after editing the story – also involved calculations. Subs got a headline size – say three lines of 36-point type over two columns – and used a table to assess how many characters would fit. Wide letters such as M counted as 1.5 characters and spaces counted as a half. “If it bust by half a character, you might send it down and hope for the best,” says Johnson. “If it didn’t work and the comps [compositors] were feeling helpful, they could squeeze it a bit.” Unless your headline was sent back to you in a tube because it bust, that was usually the last you saw of your work until the morning.

“When we started, the revise sub was slightly frightening,” says Johnson. “He’d been in Bomber Command in the war and was rather abrupt, though kindly, and he’d sit there smoking his pipe. He’d glare at his travelling alarm clock and glare at the copy, puffing at his pipe more as the evening went on. If he didn’t like a headline, he’d literally throw it back at you.”

Fact-checking could be laborious. Without search engines, having vast general knowledge was crucial, as was frequent use of the desk’s gazetteer and Who’s Who. In office hours, subs could call the library with questions, with answers typically provided in about half an hour. 但, says Johnson, in the evening you had to go up to the library yourself. “It consisted of some obsolete textbooks and shelves of cuttings, so you needed a feel for how the minds worked of the people who took the cuttings and what they might have filed things under.” Some reporters, as now, needed more checking than others: Dodd recalls one spelling the name of the poet Yevgeny Yevtushenko 13 different ways in one story.

A senior member of the team known as the stone sub would go down to the basement – a cathedral-like space filled with Linotype machines – at 5pm, when the comps would start work. The stories were handed out to Linotype operators, who set them in molten metal in single lines, known as slugs. Comps would assemble the page, guided by the sketched layout, using the cooled metal type, before it was secured in a frame; dropping it was a disaster known as printer’s pie.

There were strict rules for the stone sub. The comp (always male) stood on one side with the page facing him, and the sub was opposite. That line could not be crossed, meaning subs had to get used to upside-down mirror reading. The comp would tell the sub how many lines a story was over, and the sub made cuts on paper and handed them back to the comp, who took out the equivalent bits in the metal type.

Sivell says: “It was a responsible shift and I felt pleased to do it, even though it was hard work. I was a very young female journalist and they did know my business better than I did, probably, but they tended to be more helpful to the men.”

Dodd recalls that although most interactions in the comp room were good-natured, it was “a difficult relationship: you’re working [for your editor] on a page with a comp who’s working for the master printer”.

Diversity was not a priority. When Sivell arrived she was one of two female home news subs, and the Guardian was such a masculine environment that she and her colleague Celia Locks were invited to lunch at the home of Mary Stott, the women’s editor, to discuss their experiences. Improved diversity now, in terms of gender, class, ethnicity, age and sexuality, is reflected in more thoughtful language. “We are more aware of reflecting changes in vocabulary for the readership, and that the very white male vocabulary that used to be part of the job has gone,” says Sivell, who still does freelance shifts for the paper. “We have a style guide that is constantly being reviewed and challenged. Prostitute or sex worker, the use of pronouns such as ‘they’ – this is how language evolves, and that is in the hands of the subs.”

The biggest change in my time has been the focus on the website. From a sideline in an annex, with mostly junior staff, it has become a round-the-clock global operation, with subs in London, Sydney and New York.

这些日子, many of us in London work across web and print. Some prefer print’s daily rush for the 9pm deadline. Others like the flexibility of web subbing, as well as its speed and reach. Whichever desk we work on, and whichever period we come from, we can all recall the electric atmosphere when working on a big breaking story – from Watergate (Dodd), to the death of Diana (约翰逊), the night Portillo lost his seat (Sivell) or the UK voting for Brexit (me).

New technology first arrived for print in the mid-1980s, in the form of Tandys powered by four AA batteries and with a memory of about 1,000 words. Computers were introduced gradually, and eventually only the news pages used hot metal, until it too was noisily “banged out” (a traditional farewell in journalism) 在 1987.

The moment when journalists were on machines dealing with type themselves was a huge step, Sivell says. “It was a ropey period for subbing when new tech came in,” admits Dodd.

So were the days before all the technology the era of “proper” subbing? 不, says Sivell: “You can focus on the words now; you’re not fiddling about counting how wide a letter is.”