The California region where Covid ‘just isn’t slowing down’ 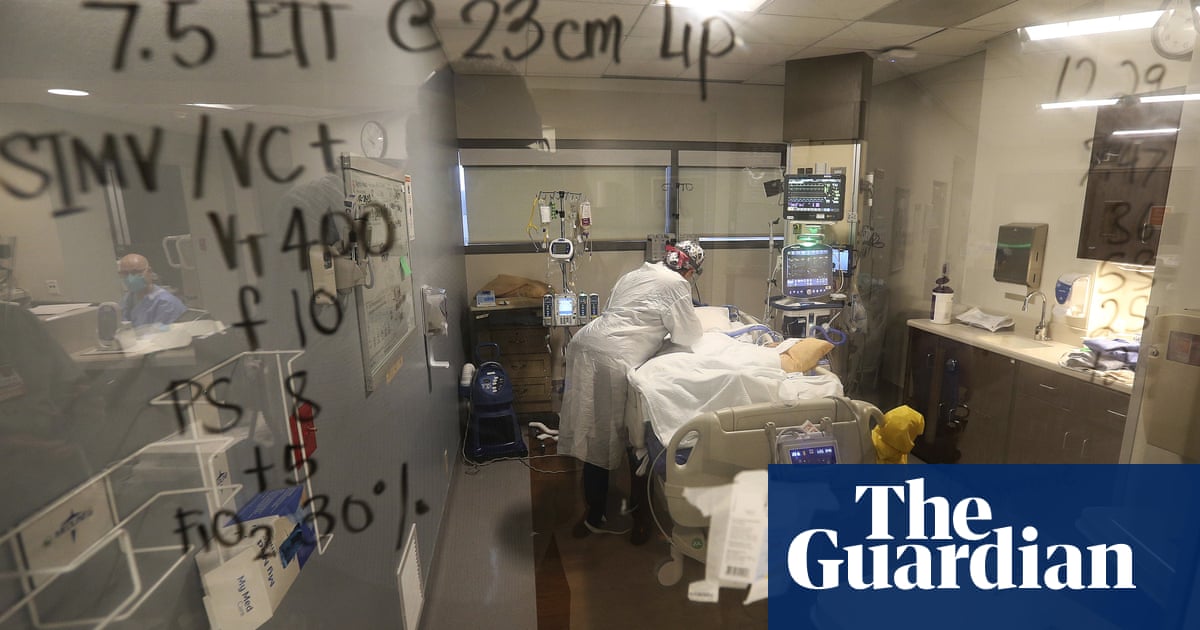 California has the lowest coronavirus case rate in the country. But within the state, the agricultural Central Valley and rural north remain overwhelmed.

Resistance to vaccines and public health mandates, combined with the advance of the Delta variant, have triggered an explosion of cases that are pushing already strained public health systems to the brink. In some counties, the case rate per 100,000 people is three or more times that of the state.

At some healthcare facilities, critically ill patients have waited for days to be transferred from the emergency department to the ICU. Throughout the valley, hospitals have reported having less than 10% ICU capacity available since the beginning of September. And while the number of new cases appears to be slowing, healthcare workers are bracing for more hard weeks as patients continue to stream into hospitals.

On a typical day at the Community Regional medical center, a hospital in Fresno, Dr Kenny Banh says, patients are lined up outside on ambulance gurneys, because there are no hospital beds available. When he gets inside, even more patients in gurneys line the hallway.

“I’m exhausted and just disappointed that we’re here,” said Banh, an associate professor of clinical emergency medicine at UCSF Fresno who has been taking on extra shifts in the emergency department and ICU, as well as managing local vaccine clinics and testing centers that earlier this month had lines that stretched a mile long.

The deluge of illness and death had been especially difficult to fathom because the surge “was preventable”, said Banh. The region has much lower vaccination rates than the Bay Area or Los Angeles, and Bahn regularly sees patients who are on ventilators and still do not believe they have Covid-19.

The vast majority of hospitalized Covid-19 patients were unvaccinated, Bahn said, and nearly all the others had been immunocompromised people – including those with leukemia and other cancers – for whom the vaccines are not as protective.

Across the region, emergency dispatchers have been asked not to send out ambulances to patients unless they meet certain criteria. “We’ve never had anything like that before,” said Dr Danielle Campagne, the medical director for American Ambulance, the agency that oversees ambulances across Fresno county. In recent weeks, ambulance staff have also increasingly had to treat patients and keep them stabilized for hours while they wait for hospital beds to vacate.

Campagne says the pressure on hospitals and emergency responders has also increased with stay-at-home orders lifted and residents returning to their pre-pandemic pace of life. “During the previous Covid surges, there were a lot of infections, but there weren’t as many car accidents or shootings,” Campagne said. “Now that people are going back to their everyday business, they’re getting in car accidents, they’re getting shot, they’re getting heart attacks – so we’re treating all of those people as well as Covid patients.”

The agency is not only stretched thin due to the coronavirus surge but due to a severe shortage of paramedics. “As we approach a year and half of this pandemic, our paramedics – who have been on the front lines, working through this summer in 110-degree heat, seeing so much trauma, are physically, mentally, and emotionally drained,” she said. “And many are leaving the career to do other things.”

The region’s ranks of doctors, nurses, respiratory therapists and administrative coordinators have also been cut down. Nurses have been working extra shifts or tagging four to eight extra hours on to their regular shifts to compensate for missing colleagues who have come down with Covid-19 or have left the profession entirely. “We’re experiencing burnout and also moral distress – because when we don’t have the resources and staff we need, patients aren’t getting the care they need,” said Rachel Spray, a nurse at the Kaiser hospital in Fresno.

“Your heart gets pounded by death after death after death,” said Mary Lynn Briggs, an ICU nurse at Mercy hospital in the valley town of Bakersfield. Seeing so much death – including preventable deaths increasingly among young and relatively healthy unvaccinated patients – has left her raw and unsure if she can survive the year and a half she has remaining before she can retire. “At the end of my shift, I just want to be able to go into an office and burst into tears,” she said.

She wished the blissfully unaware public outside the hospitals could take a peek inside, she added, “and realize – this is what happens when you make the decision not to get the vaccine, and don’t wear a mask”.

The valley and rural northern California – which have been rocked by volatile anti-mask protests and fury over pandemic business restrictions – were among regions with the highest support for a gubernatorial recall campaign that sought to unseat the state’s governor, Gavin Newsom, largely over his public health policies.

Meanwhile, agricultural workers – many of whom lack legal status and access to medical care – have been the hardest hit. The rate of Covid-19 test positivity in farmworkers in California was four times that of the rest of the country, according to a report published in Jama Network Open earlier this month. Throughout the state, Latino and Black residents remain disproportionately affected by the pandemic – Black residents have the highest rate of hospitalization in Los Angeles county.

But while coastal metropolises have the resources and staffing to cope with surges, rural California’s health system is faltering.

In northern California’s Placer county, the health officer, Rob Oldham, told local supervisors that the number of patients hospitalized with Covid-19 in early September had exceeded the winter peak. The number of new infections appears to be tapering off, but Casey Bell, an emergency room nurse, said hospitals remained overwhelmed.

At the Roseville medical center, where Bell works, the line of patients seeking emergency care had in recent days snaked “from the check-in desk to outside the ER and almost around the bend”, she said. “It looks like a line for a Disneyland ride.”

The short-staffed hospital has increasingly asked nurses to work overtime and double shifts, Bell said – and the pressure had begun to affect her health. After working an eight-day stretch this month in the hospital’s outdoor coronavirus treatment tent, Bell collapsed during her shift.

“We’ve been dealing with what’s basically been a sprint for the past year and a half,” she said. “And at least over here, it just isn’t slowing down.”