The Bull and Last, Londen: ‘I love their grub and it’s date night’ – restaurant review 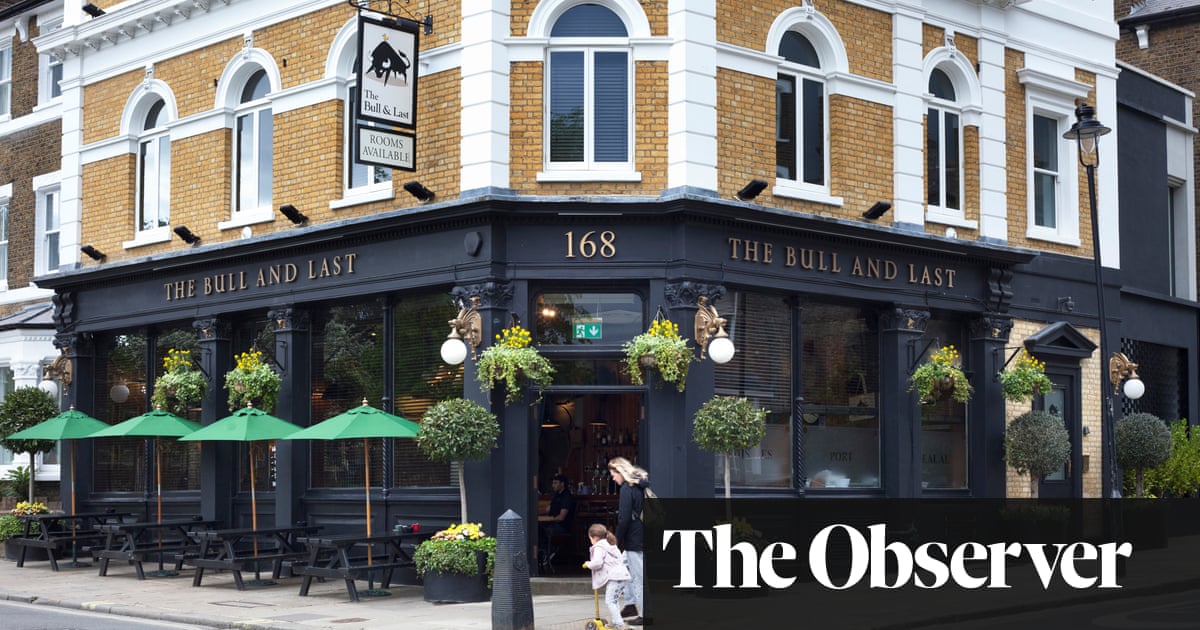 Wel, I scoured the Michelin Map of Great Britain, deliberating over fine dining and cafés alike. I thrashed out ideas of train journeys to cottage kitchens in the country and posh show-off dining rooms in faraway cities, but ultimately I boiled it down to another question: where do I really want to eat? And there, at the bottom of my street, is the honest answer: die Bull and Last.

It’s a pub – according to those who care about pubs. Also, once a week, it’s a shining light for quiz enthusiasts. Most recently, it has opened up six sumptuous rooms to stay in, and even offers picnic baskets for local walkers. But I am heading there with my husband of 20 jare (he is not 20, the marriage is), because I love their grub. It’s date night and Jay Rayner is definitely not invited.

The Bull and Last’s appeal lies not just in the oak-panelled open bar and restaurant, but in the staff’s warm and familiar greeting. It’s almost as if they know you. En, let’s face it, that’s the skill of a gold-standard front-of-house. I’d rather presume they’ve seen me on the telly or admired my cooking on Instagram, but the truth is they may well be pretending to remember me. To ask how the family is doing is vague enough to cover themselves and welcome me with a regular’s special treatment. I don’t care either way, as I know that there is a chocolate brownie with my name on it and a second sitting expected in two hours.

So with no time to waste, I order a gimlet, to share. My husband looks at me as if he’s about to get lucky. I break it to him that a gimlet is not a sexy piece of Victorian underwear, but a gin and lime cordial aperitif. Homemade lime cordial with a sprig of rosemary turned out to be sexier than undies any day. I’m a cheap date, so at this point I’m already drunk. I also need the Dutch courage, as we decide bravely not to order the same thing we go for every time we come here. You see it’s their buttermilk chicken that I’ve been having a food affair with for a number of years, but we both know it’s time to sow our seeds elsewhere, and I’m trying to eat less meat and no fish. Ja, I’ve seen the same documentaries you have.

So when my starter of charred tenderstem broccoli arrives, adorned with roasted pistachio dukkah, bejewelled with pomegranate seeds on a smooth lining of tahini, I vow I will never stray from my new vegetarian mission. Ongelukkig, my husband’s fried chilli and black pepper chipirones with aïoli has other ideas. Little crispy baby squid nuggets sent from the Devil, wel, from the kitchen that make me certain there should be rules to this new way of life. The first rule being that if I didn’t order it, then it is OK to eat it. Squid in a pub can be the floppiest, chewiest let-down of all, but dear God of calamari… (I can’t use the octopus word because I’ve seen that documentary, ook). Here is a kindergarten of seafood so good, I start planning our next visit before our main course has even arrived. All this washed down with a crisp French rosé on the rocks, ranging from a glass at £4.50 to a bottle at £27. My husband is quietly ordering a beer that can only be enjoyed by Bull and Last customers: So Solid Brew, a 4.4% pale ale that is apparently both pale and ale. I glaze over a little at beer chat because I basically only drink rosé, a shared sexy gimlet aside. FYI, this alcohol rule has kept me out of AA due to the lack of a good pink option when I want it, especially during the winter months.

Ek, egter, have my eye on one of the two vegetarian options, both with celeriac at the heart of each dish. I lie and say I’m so full I couldn’t possibly fit another morsel in, suggesting I’d need something light. It arrives as a picture of peashoots and zucchini adorning a roasted steak of salt-baked celeriac on a sweet broad-bean relish. Hearty yet delicate, it confirms to me that I was right to think outside my chicken box. It is like eating a garden.

My husband, an all together more meaty fella, has a sirloin steak and triple-cooked chips to rival any. Produce and suppliers are key to the success of this place and it elevates each dish that arrives. I’m a confident cook who loves being in my own kitchen, so I need to walk away from a night out knowing I could not have done it better. Well I couldn’t, and that is confirmed with the arrival of the warm chocolate brownie and soft-serve vanilla ice-cream. ek bedoel, what genius allows me to enjoy my childhood favourites at Michelin-starred taste levels? It is unnecessary to order a side ball of Malteser ice-cream but hell, it’s date night and seeing as these good people have returned the Bull and Last to its hostelry roots, as my kids often suggest, maybe we’ll get a room after all.