Thanks, Harry and Meghan, you’ve given us just what we want from the royal family 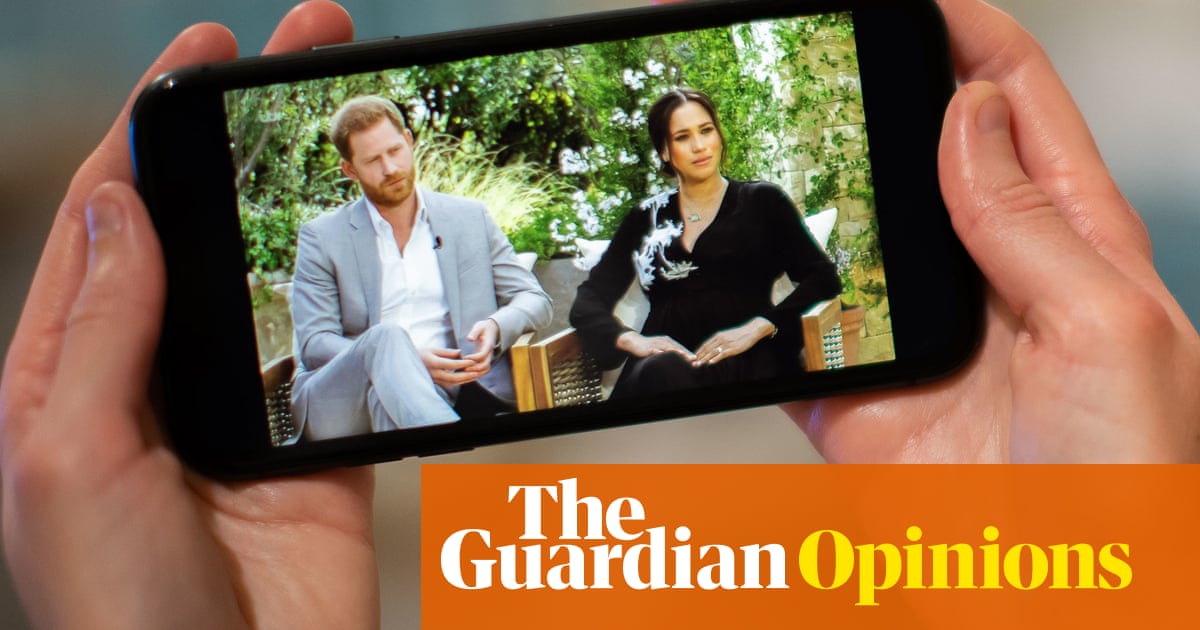 Well now: a “21st-century monarchy”. As an oxymoron to run a mile from, it’s up there with “fourth-century brain surgery”. Trying to clean up after the Meghan and Harry interview feels a little like asking a series of decapitated mafia soldiers if they can produce an email trail showing they raised their issues with their line manager.

The institution headed by the Queen, 94, is accused of racism, along with an as yet unnamed member of the royal family on whom the net of fevered suspicion is likely to close. A lot of people will have dealt with racist family members of their own, of course – but concerns about bloodline mean so much more coming from any royal house founded on intermarriage. Even so, it feels a little late for the royals to be taking an interest in genetics. A child being a quarter African American is somewhat less of a talking point than one side of that child’s family having repeatedly bred with its cousins for half the 19th and 20th centuries.

Still, on with the show. It’s fair to say the house of Windsor has failed to end its marrying-an-American-divorcee hoodoo. As for the idea that there is some sort of HR process in train to investigate both Meghan’s complaints and complaints against Meghan, I’m sure it’s a nice idea, but … do me a favour. The royal family can’t even begin to pretend “the firm” is like “a firm”. No firm I’ve ever worked for feels they still have to pay the bezzie of an international paedophile, who himself has had to deny having sex with a trafficked 17-year-old. Actually, hang on – when I started as a secretary on the Sun, the paper’s chief reporter had been allowed back to work after being convicted of strangling and drowning his wife. So yes: always good to hear from certain sections of Fleet Street on what counts as conduct beyond the pale. “Meghan’s Baby Shower Shame”, is it? Righto.

Unsurprisingly, the Duchess of Sussex is not the first person connected with this “firm” to feel suicidal. When the Queen and Princess Margaret’s devoted nanny Crawfie wrote a discreetly adoring and anodyne memoir, The Little Princesses, the royal family effectively destroyed her. Some kind of published reminiscences had initially been the Queen Mother’s idea, but Crawfie was utterly cast out and demonised for the next 30 years – for ever parted from the two children she had effectively raised, at an age where she was now unable to have her own. Desperate for reconciliation, she bought a house on an Aberdeen road down which the family drove on their annual summer decampment to Balmoral. They never stopped. When she attempted to take her own life, as she did twice, Crawfie left a note which read: “I cannot bear those I love to pass me by on the road.”

The more Harry and Meghan used the word “the institution” in their Oprah interview, the more it sounded once again like somewhere known locally as “The Institution”. As in, a nightmarish place, with staff instructed not to speak to townsfolk about what happens there. Just assume the Queen has a wacky sign on her desk: “You don’t have to be mad to work here – but you will be by the time you leave.”

Moneywise, I’m sure it’s unfortunate being “cut off financially” in your mid-30s, in a way that forces you to leave a taxpayer-funded house to purchase a $14.5m (£10.4m) Californian mansion. But it feels even more so when Buckingham Palace advertises jobs at below the living wage, given a lot of the duties sound like something you might be expected to perform if you were being held without your passport in exchange for “room and board” in a shed.

Whenever the tasks of royal servants are itemised, I can only imagine them being listened to by a fictional police officer from a specialist unit, probably played by Sarah Lancashire. “And you say your job involved squeezing toothpaste on your master’s toothbrush … ? OK. And what would happen if you put the toothpaste on wrong? … Right. I see. And you’re saying you had to hold the specimen bottle when he gave a urine sample? No, it’s all right, love. I know it’s hard. Let’s take a break, get you a cup of tea.”

But we know all this. Perhaps the last truth some dare not speak about royal dysfunction is their own addiction to it. Speaking my own truth, I note I am writing another column about the drama – the second in three weeks. And for all the outrage yesterday, there was a sense of high excitement to many people’s engagement with the latest bombshells, as they condemned/supported the dramatis personae thrice hourly on social media. I was reminded of the woman I met in Windsor the day before Meghan and Harry’s wedding, who was one of those camping out to see the happy couple. “It’s terrible what they’ve done to her,” she fumed to me of the tabloids, three of which she had bought that morning and was working her outraged way through.

There’s plenty of precedent here. Contrary to the pompous way in which it is often discussed, people loved the abdication crisis. The whole drama gave them quite the lift in otherwise depressing times. I’ve quoted a passage from Evelyn Waugh’s diaries here before, but let’s wheel it out again: “The Simpson crisis has been a great delight to everyone. At Maidie’s nursing home they report a pronounced turn for the better in all adult patients. There can seldom have been an event that has caused so much general delight and so little pain.”

The shock death of George VI was also luxuriated in, according to the Bloomsbury Group diarist Frances Partridge, who noted “bulletins of thunderous gravity and richly revelled-in emotional unbuttoning”.

“The whole effect is of ham acting,” she continued, “and a lot of nonsense is being talked about the relief necessary to our tortured feelings. What the public is feeling is a sense of great drama, not at all unpleasant.”

My own long-held belief is that a sense of great drama is what people truly want from the royal family. It’s not what people SAY they want, of course. People say they want dutiful ribbon-cutters who speak in platitudes, and only biannually. They say they want fist-gnawingly dull copy about how the Queen is wearing a brooch she wore on her honeymoon to this or that engagement, and what that might mean. They say they want 1,500 words of torpid and painfully uneventful bollocks about William and Kate boarding an easyJet flight. But what they really want is high drama, pure mess, grotesque villains and a side to take.

They’ve certainly got one now. Early polling suggests sympathy for the Palace and the Sussexes is split deeply on generational lines – which is a problem if you’re in charge of something that has to get handed down the generations. It is increasingly clear that the Queen has constructed a monarchy which only works with her specific, unreplicable personage at the helm. Or to put it another way, if you want to tell a coming blockbuster horror story in just two words, try this pitch for size: “Charles III”. Apres ma’am, le deluge.