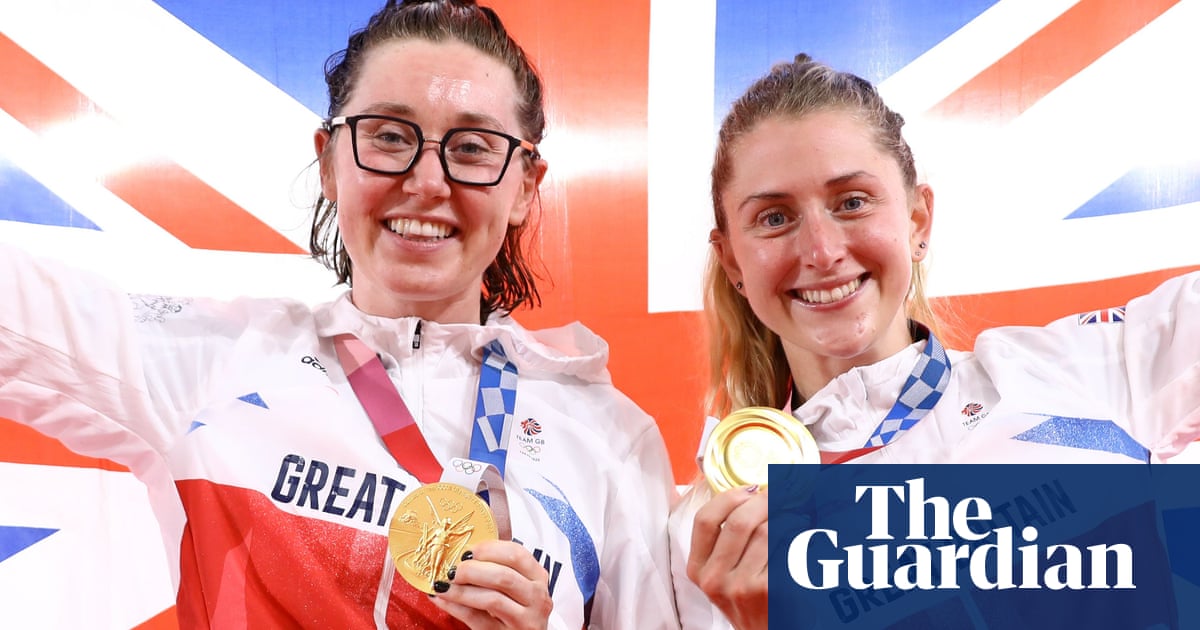 A day of golden glory for Team GB at the Tokyo Olympics on Friday saw cyclist Laura Kenny become the first British female Olympian to triumph at three consecutive Games and Kate French win the modern pentathlon, while there were more medals in cycling, hockey and on the athletics track.

All eyes were on Kenny at the Izu Velodrome, but she and Katie Archibald brushed off nerves to give a masterclass in the madison in a race hailed as this Games’ greatest ride. They finished 78 points ahead of Denmark in silver and the Russian Olympic Committee in bronze.

Glowing with pride and bursting with emotion after the race Kenny – now the most successful female cyclist in Olympic history – could not keep the tears at bay as she spoke about her son Albie.

“I have never missed him so much in all my life,” she told the BBC. “It’s so hard leaving him at home. To have Katie here – it feels like I am racing with my sister. I couldn’t have done it without her.”

Shortly after Kenny made history in the velodrome Jack Carlin took bronze in the men’s sprint, to go alongside his team sprint silver. Team GB have now won five cycling track medals, with more racing to come– including from Kenny.

GB’s second gold of the day belonged to French in the modern pentathlon, after her dominant display destroyed a strong field with her concluding laser run performance at the Tokyo Stadium. The 30-year-old had never won an Olympic medal coming into these Games, but won gold by a clear margin after five and a half hours in a series of disciplines including fencing, swimming, show jumping, and target shooting after running at full pelt in the laser run.

“I tried not to think too much about getting a medal,” she told the BBC. “I’m so pleased I was able to hold it together. It’s always been a dream and I can’t believe it’s come true.”

On the track, Laura Muir, who qualified as a vet in 2018, vanquished the memory of a series of near misses in other competitions to win a silver medal in the 1500m final with a personal best and a new national record of 3min 54.50sec. Kenya’s defending champion Faith Kipyegon took gold with a new Olympic record – with Muir and a delighted, barefoot Kipyegon taking a lap of honour together. Sifan Hassan from the Netherlands took bronze.

Gasping for breath, the British flag draped around her shoulders, Muir struggled to find the words to describe her emotions. “I’ve worked so hard, for so long,” she eventually managed.

The 28-year-old Scot has had a series of near misses in a series of world and Olympic finals, but had not made the podium until Tokyo. “I don’t think I’ve ever been so scared, like someone was going to pass me and I was going to come fourth," sy het gese. “I just gave it everything and I was tiring up so bad. But I thought just keep pushing, keep pushing.”

In the relays, Team GB’s CJ Ujah, Nethaneel Mitchell-Blake, Richard Kilty and Zharnel Hughes won silver in the men’s 4x100m relay final, missing out on gold by just a hundredth of a second, as they were pipped to the line by Italy – their fifth gold in athletics in the Games. There was a tense wait for Asha Philip, Imani-Lara Lansiquot, Dina Asher-Smith and Daryll Neita in the women’s 4x100m final. They were forced to wait to celebrate their bronze after a review of their first changeover, which was finally confirmed to the team’s delight.

Asher-Smith’s ambitions for individual success at the Olympics were knocked off course by a hamstring tear at the British trials in June. In Tokyo she missed out on a place in the 100m final and withdrew from the 200m. “I’ve got a bit of a mixed-emotions feeling because obviously I’m like, ‘Aargh, I could have done this and this and we could have pushed for a different colour medal’," sy het gese. “But at the same time if I’m being honest, on a personal journey, I was on crutches six weeks ago and there was a less-than-10% chance I was going to be here. I worked incredibly hard and to come away with a medal here is honestly something I could not even have contemplated six weeks ago. Seven weeks ago? Absolutely. Six weeks ago? Not at all.”